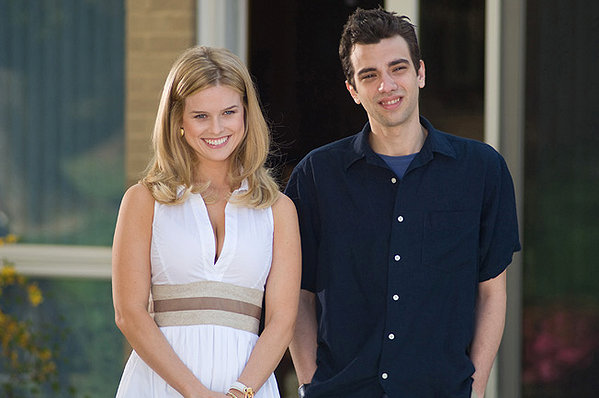 Romantic comedies seem harmless…but they could actually be ruining your life and your expectations!

Fairy-tale: Loving her was a bet and she used him to write an article! Then they forgave each other and fell in love. That simple.

2- You wouldn’t forgive each other!

Fairy-tale: According to the movie, Drew Barrymore suffers from short-term memory loss but that doesn’t stop Adam Sandler from falling for her and eventually marrying her..

Reality: How can someone fall in love with a person who doesn’t even remember them? W meen 3ando khol2 eno kol youm yefakar 7ad b kesset 7ayato?

Fairy-tale: He falls in love with the wedding planner and cheats on his wife-to-be and still be loved by everyone at the end of the day.

Reality: Cancel your wedding to be with someone you just met and still be the hero and everybody congratulates you and loves you and your wife-to-be is okay with it? NOOO, shebsheb zanouba w fo2 nafoukhak.

4.She’s out of my league

Fairy-tale: A gorgeous girl like “Alice Eve” falls for a geek from a different world and a different lifestyle like “Jay Baruchel”.

Reality: I’m not being shallow here, but he shouldn’t fall in love with her either. No one can fall for someone they have nothing in common with, it’s just not possible. I think the picture shows how impossible the situation is.. 7ARAMMMM ha3ayat !

Fairy-tale: A handsome billionaire, Richard Gere, falls in love with a prostitute, Julia Roberts, after hiring her for a week!

Reality: Yes, there are prostitutes who fall in love and get out of the sex industry. But not in a week.  Wa ne3ma el iman ya okhty. And how can Richard Gere get over the fact that she slept with over a hundred guys?? Believe me, guys don’t just let go these kind of things. It will haunt him every second!

Fairy-tale: Adam Sandler falls for a Spanish maid who doesn’t speak the same language BUT STILL he falls in love with her.

Reality: No, they can’t fall in love without communicating. That’s super shallow because obviously they are just attracted to each others’ looks! It’s too unrealistic +  To make things clear, Paz Vega will never be our all-time favorite “Om Farouk”.

Fairy-tale: Well, he gets paid to date her and she finds out but still she falls in love with him..

Fairy-tale: The guy’s sister decided to go to college disguised as her brother. Nobody notices and still she falls in love with the most popular guy there.

Reality: Seriously?? He quickly got over the fact that he thought she was a dude for a couple of weeks?? He didn’t see anything wrong with that? Come on!!!

Fairy-tale: Justin Timberlake and Mila Kunis had a friends with benefits relationship until they fell in love and decided to be together

Reality: No, no guy in the world will have this kind of relationship, with no strings attached and no drama, and decide to go for a relationship, specially if it was with someone as hot as Mila Kunis! Azon el resala wasalet.

Fairy-tale: Sandra Bullock was getting married to a guy just to get her visa renewed and then they quickly fell in love.

Reality: They fell in love in A WEEKEND ! Weekend ya kafara?? Leh? W ba3dein it’s obvious enaha esteghlaleya! How can you trust her?