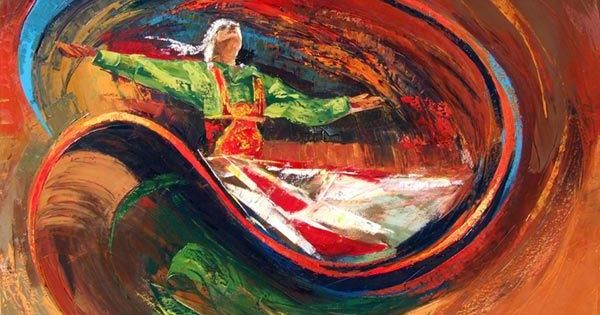 Perhaps you’re thinking “aren’t Sufi events those events where they sing and weird people rock themselves from side to side, sometimes followed by a Tanura guy?!”

The answer is yes and no.

Sufism IS a mystical form of Islam, a school of practice that emphasizes the inward search of God and shuns materialism.

So, yes, some of those passionate followers of these schools do act a bit eccentric. Yes, they sway and seem transported to another worldly place. But that doesn’t define the entire concept of Sufism, and shouldn’t be the reason why you can’t enjoy a Sufi event.

Here are a couple of reasons attending a Sufi event is totally worth a shot:

Break the loop of the ordinary, and the usual. Try discovering an ancient art that is intertwined with the lives and souls of its followers. After all, Sufis have produced an enormous wealth of knowledge to the world through philosophical geniuses like Jalal Al-Din Rumi and Hazrat Inayat Khan.

It’s an ancient form of art. Most of the modern “oriental” music we hear today is actually far more modernized than we think. Sufi music is the closest you’ll get to our ancestors’ musical roots.

3. Enjoy the Sound of the Oud, the Duf, the Nai and the Qanun

If you’re already a fan of oriental music, you’ll truly appreciate the beauty of the instrumentalists. The instrumentalists actually get time to shine, unlike most concerts which focus only on the singer/performer. If you’re lucky to attend a Aly Helbawy concert, his Qanun player gets as much acknowledgment as he does. Sometimes the audience will demand a longer intro just to hear him play.

4. Enjoy the Beauty of Arabic Poetry

Obviously Sufist performers don’t sing the latest hits! Different singers do have songs of their own, but they also have a vast library of old ballads in various accents that they perform with the same fervor as their own. Some are in classic Arabic, others in Egyptian dialect; there’s also Bedouin dialect. It also depends on the performer(s). Egyptians have ballads, different to those of Syrians for example. But whichever dialect or song they choose to perform listen out to the lyrics. There’s wit, there’s charm, there’s love; the words will melt your heart and you’ll be left in awe.

The first thing that takes most first timers by surprise is the variety in the audience. Usually musical events invite people with similar tastes in life, shouldn’t an event defined by a faith have an even narrower variety of audience?! Surprisingly, it’s the total opposite. You’ll find the devout followers who’ll sway to the rhythm, and foreigners who might not even know the language. You’ll have a spectrum of women; from abayas to pants, from niqabis to not veiled. People of all ages, all social classes, different religions, yes different religions. The variety is rich and beautiful; it’s worth just going there to regain faith that we can one day be unified again as a nation. We just need more music and love.

6. You Get to Meet Famous People As Well!

Now this one sounds a bit lame, but for those who do like meeting famous people, you’ll be surprised by the number celebrities that do show up to these types of events.

7. A Chance to See a Touch of Islamic Art

A lot of these events do take place in traditional locations like EL Hussein and EL Sayeda Zaynab, naturally these are places that are rich in Islamic Art. But nowadays, if you don’t want to dive that deep into old Cairo a lot of the performer do go to more modern places like EL Saqya and the Opera House, but the interesting aspect is they’ll decorate the place accordingly. They once had the place in Saqya adorned with Mouled decorations for Mouled El Sayeda, it was beautiful.

8.Take in the Energy

Besides the positive vibes that come from being surrounded by people from so many backgrounds united for the love of music, there’s a beautiful energy present that no one can deny. Sufi performers will build rapport with the audience, they’ll talk to them and they’ll always invite them to sing along. If you hate singing in public, don’t worry, you’ll get caught up with the crowd’s fever in no time. You can’t run. They’re on mystical mission and they’ll take you with them, no one gets left behind.

9.Take a Break from Worldly Matters

A large part of Sufi teachings center around freeing yourself not just from materialism, but from the cravings of any form. Even if these cravings involve the desire for heaven. These teachings resonate in the songs/ballads they sing, just read these words from “Neseem Elwasl” (The Gist of Connection).

‘For they do not ask for the Gardens of Eden… nor the beautiful angels. Only the sight of your holiness is all they wish…and that is all they desire.’

Allowing yourself to be engulfed into that world for an evening is a cleansing process we desperately need in our highly crammed technologically driven lives. You’ll never nor are you required to reach that stage of stripping down all your desires in life, but it’s nice to feel you can forget about the world for one night.

10. Embrace an Inner Peace within You

Letting go of worldly matters is one thing, getting lost in the “Azkar” is another. The words of the chants manage to reach into the chords of your heart, no music needed. And it is there, in the voices of the chanters that you shall feel a tug, a pull towards the Divine. It is there that you find inner peace, where you realize that all the hate in this world is so small in comparison.