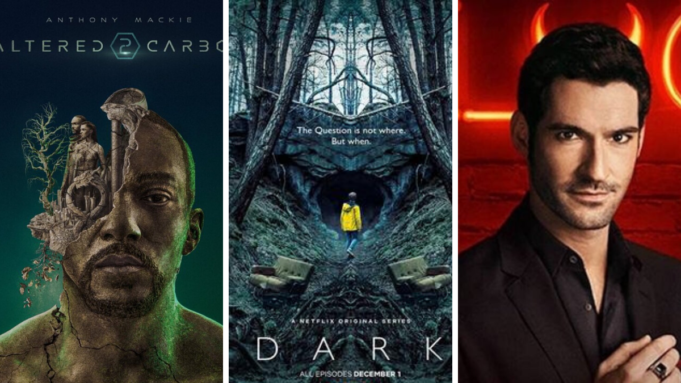 At this point in the quarantine life, you’re probably bored and want something interesting to keep you invested. Surely, you’ve tried watching a TV show or two, but nothing can really keep you interested, right? Everything is boring nowadays, correct?

Well, no, not really. There’s a whole other section of TV shows that will leave you mind-boggled and stunned, without enough time to try to piece just what happened. If this is what you’re looking for, then you’ll find it in these 10 TV shows.

The events of Altered Carbon start 360 years into the future in a world where people store their memories and consciousness into USB-like devices that can be removed from one body and transferred to the next at any time.

Using this oddly terrifying technology, a solider-turned-detective must travel the world (and also time, kind of) to solve one high-profile murder, among a string of other mysteries.

After a number of children vanish into thin air in a small German town, a series of past mysteries come to light and reveal secrets haunting the town for generations.

If you think this is it, you’re severely mistaken because, yes, we do travel back and forth in time to see some of these untold truths and let us just tell you, we still can’t piece it together. Don’t worry, though. This is the most confusing show you’ll ever see but you’ll love it.

Another confusing but lovable gem, The OA takes every question you asked about alternate dimensions and universes and says ‘you know what, this is real now’. The show starts with a blind woman’s return after she’s been missing for seven years, only she has her sight back…as well as several secrets about dimension-hopping and near-death experiences.

Don’t worry, though, it gets even weirder. Draco Malfoy’s dad is there as a mad scientist type set on stopping the protagonist from revealing his godawful plans. Yes, this is the show — it’s a ride you’ll actually need math to learn.

Don’t you hate it when you watch a TV show and a character you love dies and never comes back? If you do, you won’t have any problems here because The Good Place is about four dead people in the afterlife. Only things aren’t as they seem.

Because these characters are in the titular ‘good place’, you can imagine their shock when they find out one of them doesn’t belong there and actually belongs in hell. Other than this, the show has a ton of philosophy that will leave you doubting your right-and-wrongs every second of the day.

What if the devil was one of us? This is the question Lucifer, as a show, asks us as it tells us the story of the devil as he gets bored of ruling hell (that can happen, yes) and leaves it to experience the light and glamour of L.A.

It’s not all butterflies and sunshine, though, because there are lots and lots of murder and demonic threats that Lucifer has to solve and go through, with the help of a very tired detective by his side.

A show made of stand-alone episodes, Love, Death, and Robots is an imagining of what life would be like if it was in the dystopian future and robots were literally everywhere, living life as we do now.

Needless to say, that prompt means you will have a hell of a time as you take in the technology and the quality animation that went into creating something that intricate.

Orphan Black begins with a gruesome death, but that actually isn’t the most morally dubious thing about the show. See, it’s a show about illegal human cloning, ethics, and the sinister plots that went into making these fully-human clones.

So, yeah, that’s a bit of a wild ride. But, don’t worry, as the plot gets thicker, you’ll keep a steady thought process trying to match up just who, what, and where, and why this is all happening.

A dark humor crime-drama, Fargo so far has three season, each season focusing on a specific crime and story. If you want to solve convoluted mysteries and get a laugh or two, this is the show you need to binge-watch.

Every single season so far will make you doubt your true motivations in life, as well as question everyone else’s. And isn’t that what good TV is about in the end?

So, three suburban moms walk into a grocery store to stage a robbery. There’s no punchline here, this is actually the plot of Good Girls. And, yes, it’s three times as good as you imagine it will be.

With heartfelt character motives and an actually well-written plot, you will find it hard to choose just who to sympathize with. Are you on the side of the law, the gangsters (yes, they’re there), or the titular good girls? Who knows; you probably won’t.

The show starts at the crowded, much-anticipated birthday party of the family’s patriarch, during which his mistress shows up and commits (spoilers) suicide. After which every secret the family has ever kept comes to light and the family itself almost falls apart.

If you’re upset about the spoiler there, don’t be. That’s just episode one and this show gets wilder and wilder by every passing episode. So much so you won’t shut your browser until you finish the two seasons!

Use your free time to try to unravel all that’s going on with these shows. You won’t have enough of it!