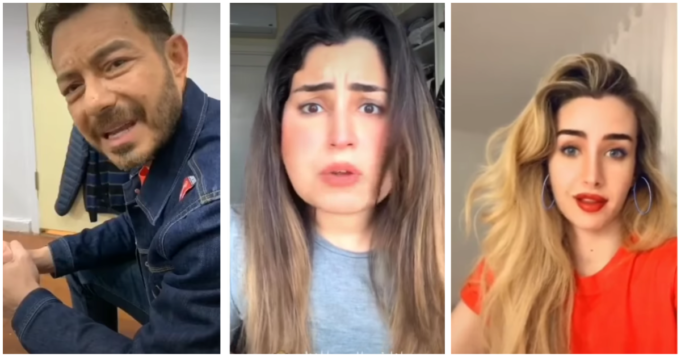 If you think you’re the only one spending all of your days making videos and playing with sounds on TikTok to pass the time during quarantine, well, truth is, you’re not alone!

To brighten up your day and give you more ideas for your next TikTok hits, we brought you a list of celebrities who are also having fun on the trending App:

We’ve always been used to seeing Hannah in dramatic, romantic and recently comedy roles. But her TikTok account showed us a whole other funny side of her with all the videos she keeps posting – and this one is our favorite!

It’s been a while since the actress hopped on the TikTok trend but honestly, even though she usually posts funny content on there, this video wins them all!

We have a lot on this list, but if this was a competition, Ahmed Zaher and his actress daughter Laila would’ve already won it a long time ago. We can’t explain how much we love the cute and funny father-daughter relationship those two have!

Mayan isn’t used to starring in comedy roles, but her TikTok account just gave us a million reasons why she would be amazing as a Comedy actress with her very evident sense of humor!

The actress has been enjoying her time on the App for a while now – posting all kinds of content; funny, dance and even makeup videos. But we have to say, her videos with her husband, Sherif Ramzy, make us laugh the most!

Okay, so from his movies, we already know the young actor has a great sense of humor. But the TikTok video where he remakes a scene out of one of his late father’s movies alongside his older brother Mohamed, Chico, and Hesham Maged cracked us up!

Dina Dash is a public figure and the CEO of both Dash Management and Dash Beauty; she’s also the sister of young actor Ahmed Dash and their athlete brother Karim.

Dina has been recently spending a lot of her time on TikTok and has also been posting to Instagram in order to spread laughter and positivity among her followers. And due to the great resemblance between the three siblings, they remade a scene from Ahmed Helmy’s “Keda Reda” – for obvious reasons – and it was amazing!

Even though Khaled doesn’t post on TikTok as much as the rest on this list, but honestly, the few videos he’s done were so funny because of his on-spot facial reactions!

Like Khaled Anwar, Sharnouby is not a vicious TikTok user, but that one video he posted that went viral was super funny!

Mariam El-Khosht has always been posting funny content with her friends on Instagram stories, but she really did up her game after joining TikTok. This one is just amazing!

Although she has uploaded a few videos, Asmaa doesn’t use TikTok that often. But we had to bring up this funny video featuring her cat!

Let us know which of those are your favorites on TikTok!