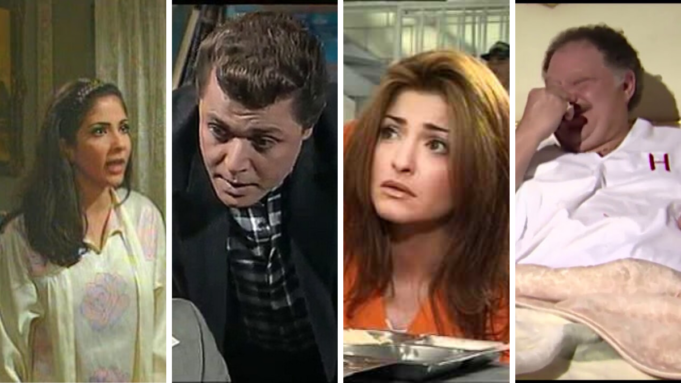 We’ll give you a minute but if the answer happens to be zero (as is the case for the vast majority) we won’t be terribly surprised because it makes sense, doesn’t it? It’s been quite some time since our TV shows were actually exciting, which is kind of sad.

So, in the spirit of sheer boredom and having nothing more than free time on our hands, we’ve decided to list down the top 12 best Egyptian TV classics for your viewing pleasure.

Who can forget this old gem? No one, that’s who! We know that you might be a little skeptical, considering the times, but you should stop judging books by their cover. Or you’ll end up missing on all the fun.

Case in point, judging this show by its cover won’t give any clue whatsoever that it’s a cross between Orange is the New Black and Nicholas Cage’s Face Off.

A classic saga with classic characters, El-Mal Wa El-Banoon gave us the best of family tensions, generational differences, and Ahmed Abdelaziz’s dramatic lines we could ever ask for. Not to mention that killer theme song too!

Take the time to re-watch this TV classic and you’ll discover that it aged like fine wine. And if you don’t feel that way, well, at least you’ll still hear the famous ‘Abbas El-Daw’ line loud and clear.

One of the many classics starring Salah El-Sa’dany, Arabesque tells a riveting tale of one talented artist and his day-to-day life, struggles and drug addiction and all, in his humble neighborhood.

You knew this one was coming, didn’t you? Well, how can you not when we’ve all watched this show literally way too many times to count?

Thankfully, you’ll find that this generational family saga passes the test of time and will be just as good on your tenth re-watching session.

Want to put your free time into good use and watch something as educational as it is historical? If you do, just revisit the Ra’fat El-Haggan series.

Sure, you know what it’s about and you might be able to recite some parts of the show (all depending on your parents’ passion for the show, of course), but it’s always an exciting re-watch.

Although this show’s premise isn’t the craziest plot out there, we as a population are still rather attached to this old gem and we can simply let time go as we revisit it again and again. There’s just something about watching Karim Abdelaziz devil-worshiping at the Baron Palace, isn’t there?

In 2007, we simply lined up in front of our TV sets and wholeheartedly signed up to watch Yehia El-Fakhrany play up being an old man-child with a series of crazy adventures.

And you know what? In 2020, we’re still signing up for a re-watch, fully aware of what we’re walking into because it’s just that iconic. (PS: you’ll still cry when that Mama Noona comes–from experience).

Do you ever feel nostalgic and just want to scour the internet to find an Egyptian show set in the Sa’id, specifically, to re-watch? If you do, you can do no better than El-Do2 El-Shared, one of the many and iconic Sa’idi gems out there.

Yes, you’ve seen this show and, yes, you can recite it from memory. You know what, though? It doesn’t matter. Re-watch it again and you won’t regret it. In fact, on one more re-watch, you might notice some details you hadn’t noticed the few first times you’ve watched this show.

If you’re bored and you want an intriguing show that will take you considerable time in binge-watching and analyzing to death, you’ll find your target in Layaly El-7elmeya.

Like most tales old as time, this show starts with a confusing marriage/love triangle of sorts that causes plenty of interesting events for the characters involved. You’ll love it–just ignore season six’s existence; that’s when the show Game of Throned itself.

Another list entry, another Yehia El-Fakharany iconic role! Other than arguably the best theme song of all time, Zizinia also has an actually interesting plot, as it shows the lives of Greek and Italian Egyptians living in 1940’s Alexandria.

Although the question this show’s name asks is a little too strong for a first impression, you’ll find yourself weirdly sucked into this show, even on a re-watch. But then again with Ahmed Abdelaziz’s general presence and Shereen Seif El-Nasr time-transcending wardrobe, why wouldn’t you be sucked in?

What are you waiting for? Go binge-watch them now!