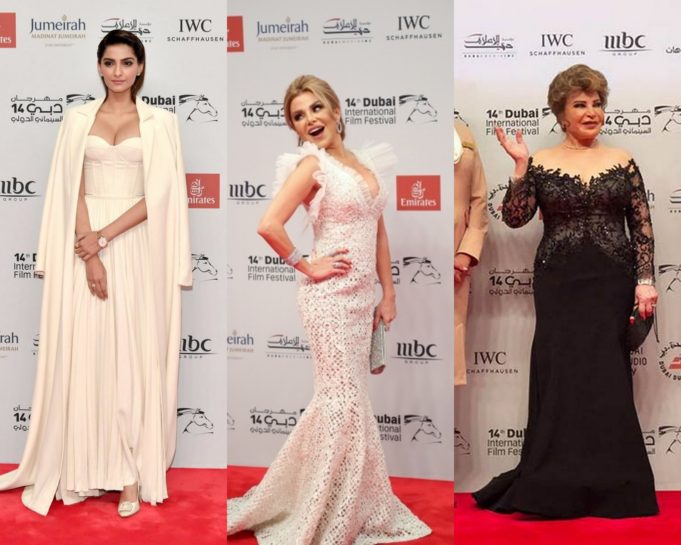 Of course, this by no means belittles our respect and love for the Dubai International Film Festival, which has been one of the hottest events in the Arab world for 12 years now. So, let’s get to our favourite fashion statements, and the ones that we weren’t so fond of. We’re interested to know what you think of our selection.

I can honestly say I am obsessed with this look! Egyptian actress Mona Zaki looked totally on-trend, dramatic and elegant in a gold & white Maison Yeya gown with a major plunging, off-shoulder neckline. I was so excited to see this look on Mona Zaki, while she always looks beautiful this dress was next-level fashion girl wear. I love the uniqueness of this dress’s fabric, and the mix of the puffed sleeves with this type of neckline. When you think she’s reached the highest of your expectations, she just keeps aiming higher. Big cheer for this fashionable mama. Speaking of which, is that a… dare I say it?! *wink*

Lebanese actress Nadine Nassib Njeim wore an exceptional look, slightly unexpectedly from Zuhair Murad. There’s a lot to marvel here, from the embroidery, to the dresses sleek silhouette, to the romantic train; it’s truly an eyecatcher. I also love how she allowed the dress to shine by keeping her beauty look minimal.

The Turkish actress was dressed in the traditional fabric of the season, velvet. Tuba wore an elegant black velvet gown by Tuvana Buyukcinar, but what made her outfit truly stunning was the glittery Kafkas jewels. 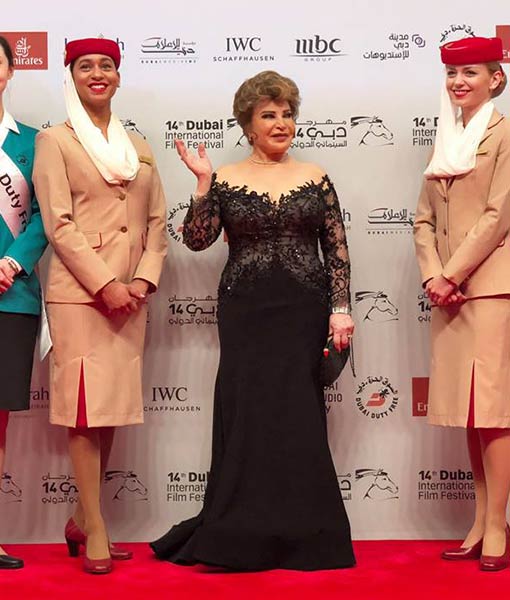 Looking elegant in a classic black frock with a lace bodice, Safia El Emari once again schools us on red carpet styling. Never one to shy away from glamour, Safia rocked this off-shoulder frock with her signature thick eyeliner and short hair-do. Does this lady ever get it wrong?

Razan took us by surprise when she showed up on the red carpet in this mermaid shape gown from Tarek Sinno. Featuring ruffles, a plunging v-neckline, and semi-sheer sheer fabric, Razan’s gown was an interesting fresh take, far more than what she wore in the CIFF.

The Bollywood actress went with an all-white outfit. Her sleek outfit featured a corseted bodice strapless dress paired with a blazer-like cape. She kept the rest of the look clean and simple with minimal make-up. I like how she tried something new with the cape, but the corseted dress is one of those over-exhausted trends.

Dear celebrities, don’t take this personally. Think of it this way, we’re judging your stylist, not you!

I absolutely adore Cate Blanchett, so I’m really sad to have her on this side of the list. However, this Giorgio Armani look just wasn’t an example of exceptional fashion. It’s just too colourful, and doesn’t suit the glamour of the evening. I feel like Cate was sort of under-dressed. This was a miss for me.

This look, while not terrible or the “worst” by any means, was one of my least favourite looks of the night. This was a case of a trend/age/occasion conflict. High-low skirts are definitely in trend but, sorry Raya, in spite of how young you look, you have outgrown them! Also, with such a highly glamorous occasion and everyone pulling the stops on the long gowns, how could this be your choice?! The dreadfully long hair on this high-collar neckline solidified this as a thumbs down for me.

If Bushra was planning to turn heads in that  frock, she most definitely did… for all the wrong reasons that is!

Mais Hamdan opted for a Ziad Nakad jumpsuit. While it is exquisitely embroidered, I think the jumpsuit is too overwhelming. There’s too much shimmery fabric, plus the cape was just too much. Did they intentionally want us to see that bodysuit that looks like an athletic swimsuit under the jumpsuit? Also, why don’t they get an outfit her size?!

He’s Nakad alright. Yes, same designer. Call me crazy, but I’m calling Hend Sabry out on this fashion choice! Obviously, she looks amazing. Her hair and make-up are flawless, but she’s wearing foliage!

You know we can’t love everything we see on the red carpet, and not every red carpet look can make the best-dressed list. After all, fashion is all about perspective. We’d love to hear yours 😉