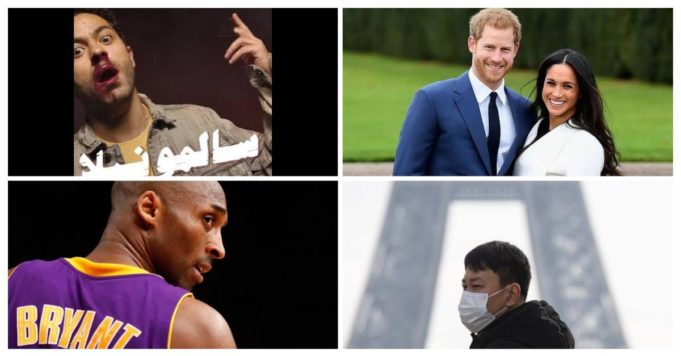 January 2020 finally came to an end, and we can’t help but feel like this month had a little bit of everything. From royals splitting from the royal family, Corona-virus to hit songs and so much more. Let’s just have a quick recap on the roller coaster that is January 2020!

The year kicked off with the launch of Tameem Younes’s hit song Salmonella. This was no smooth start to the year though since the song sparked A LOT of controversy. People didn’t know what to make of it. Does it promote violence? Or is it shedding light on fragile masculinity? One sure thing, groundbreaking success!

On New Year’s Eve, Egypt witnessed the unfortunate incident of a group sexual harassment in El Mansoura. On a more positive note, the police arrested the abusers and justice is being served!

Alright, now we can’t have a recap of 2020 without mentioning the whole “Banat Thanawy” extravaganza. This movie turned the internet upside down even before its release. But definitely for all the wrong/bullying reasons!

The most shocking news was probably that of Prince Harry’s split from the royal family. This unprecedented event had the entire world talking and it still continues to do so. Apparently the world as we know it is ending!

As the year kicked off, fears of a possible Third World War has been growing on the grounds of the ongoing-feud between The U.S and Iran. However, we’ve successfully managed to turn the whole thing to a meme-war!

Yes, we happen to live in a world where we get to see the villain become the hero. Joaquin Phoenix won Best Performance at the Grammy’s and will most likely win an Oscar!

Rami Malek was last year’s trend as an Egyptian who makes it big in Hollywood. This year, it’s Ramy Youssef. The young actor won a Golden Globe for his Hulu TV show “Ramy”; will he make it to the Oscars though? We’ll see.

Just recently, the Jenn & Brad duo blessed us with a public reunion, 15 years after their breakup. It’s been almost a month since the Golden Globes and we still can’t get enough of that footage!

Unfortunately, the month took a downhill turn of events. Towards the end of January, Lakers legendary basketball player Kobe Bryant died at the age of 41 in a terrible accident that took both his life and his 15-year-old daughter’s.

We don’t know what 2020 still has in store for us, but let’s pray the year gets kinder, happier and funnier. Seriously though, we feel like we’ve already seen it all!