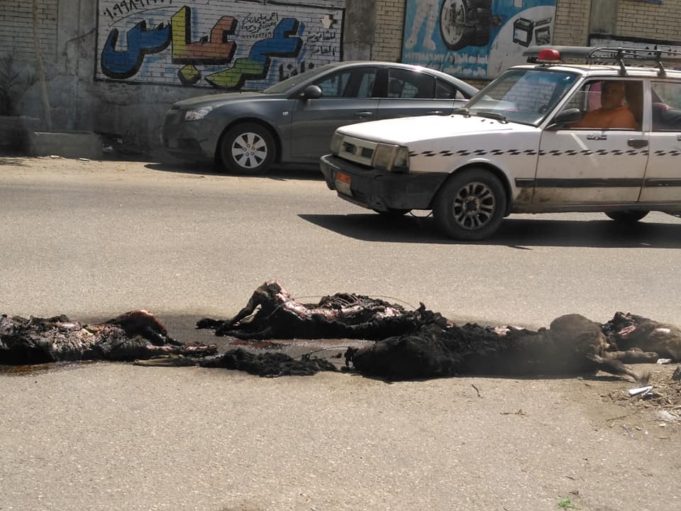 Unfortunately, this isn’t the first time we hear such awful news. Yet, fortunately this time it’s receiving the attention and media coverage it deserves.

In a phone interview, the witness of the act told the whole story.

Ahmed Moustafa El-Masry was driving his car in Shoubra when he saw the ashes of the helpless creatures. He automatically stopped his car to document this violent, inhumane act in pictures which he posted and captioned “Sorry for the horrible content, but these photos show how people have no mercy.”

Until now the the doer(s) remain unknown. When El-Masry passed by, he hasn’t seen who did it. As heartbreaking and terrifying as it sounds, he just saw 4 dogs, tied together and burnt to death.

A huge wave of anger and calls for actions have been circulating through social media channels, condemning the act and asking for strict laws to be immediately imposed on the doers of this brutal act -after they get caught-.

Mido, the famous former football player, who actually has his love for dogs documented in his own bio on twitter, took part in the wave of anger as well.

“Whoever has mercy in parliament should propose a change to this law and intensify the punishment,” Hossam wrote, “So that anyone can understand that animal torture is a very brutal crime. God created animals so that we may embrace them with kindness, not intimidate or torture them.”

He also condemned the fact that the expected punishment for the criminal(s) will be a maximum of 1 year and a 200-pound fine.

Authorities have not yet commented or published any official statements on the incident.