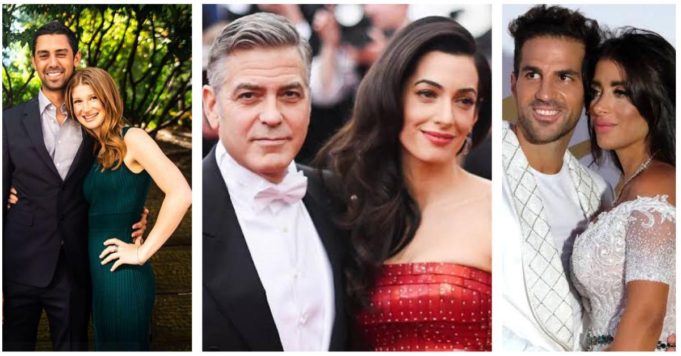 With Valentine’s Day around the corner, we thought we’d go through the real-life romances between Arabs and international high-profiles. Another reason is the fact that Bill Gate’s daughter just announced her engagement to an Egyptian.

So without any further ado, let’s take a look at this amazing phenomenon of intercultural relationships. Shall we?

Today, January 30th, Jennifer Gates, Bill Gate’s daughter, announced her engagement to Egyptian Nayel Nassar, a show-jumper who had recently helped Egypt qualify to the Tokyo 2020 Olympics. We can’t get enough of the cute pics!

This has to be our favorite couple of all time. Lebanese Amal Alam El-Din met George Clooney in 2013, and they officiated the relationship in 2014. An internationally celebrated female human rights lawyer and well, George Clooney, it doesn’t get any better than this.

Although they recently broke up, the Hassan and Rihanna duo is one we will never forget. The pop singer met the Saudi billionaire in 2017 and they flooded our timelines with lovey-lovey goals pictures ever since!

The Lebanese Daniella Semaan is another Arab who got hitched to an international celebrity. She met the Arsenal star in 2017 and they got married in 2018. They are probably the most celebrated modern couple in the football scene!

You probably forgot about this one couple. We know we did. Back in 2012, Janet Jackson quietly married Qatari businessman Wissam Al Manna and shortly after, they had their son Eissa. Sadly though, they got a divorce a few months later!

Which couple is your favorite, guys?