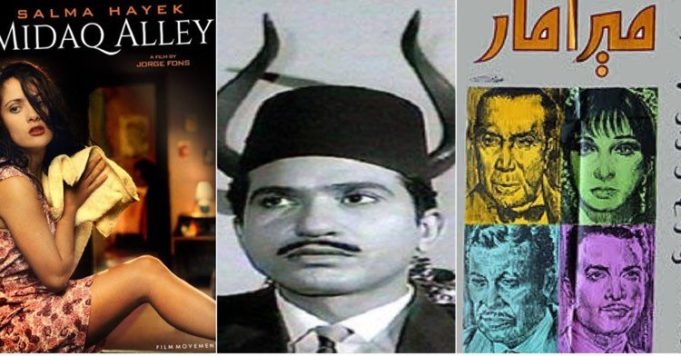 The literature of Naguib Mahfouz is very often associated with cinema and television. Before we could read his novels, most of us were introduced to his work through movies and series growing up.

Still, we feel that many of us miss a lot of his adapted work that has even made it internationally. So, we’ve decided to take you guys on a trip through some of the best Mahfouz cinematic adaptations!

We’re positive non of you guys know that Salma Hayek’s first cinematic debut was “Hamida” in a Naguib Mahfouz based movie in Mexico. Yes, El Madaq Alley was made into a Mexican production and was actually a huge success!

You may have stumbled across “El Qahera 30” on TV once or twice but you probably didn’t know that it’s yet another masterpiece by Mahfouz. The story starring Soad Hosny is about a scandalous affair and was so ahead of its time.

The Thief and The Dogs with Shoukri Sarhan and Shadia at lead is one of the most celebrated movies based on a Mahfouz novel. Discussing themes like existentialism and techniques like stream of consciousness and adding amazing oriental music, this is one movie you don’t want to miss.

We can’t have a list about Naguib Mahfouz based movies without mentioning the iconic one titled “The Devil Preaches”, the classic story about the neighborhood villain who rapes his foe’s wife in seek of revenge. Adel Adham gave one of his best performances ever!

A story about a hostel in Alexandria that houses a very diverse group of people in one place and how we see their life stories and deepest secrets unfold one by one. This one movie is both fun and philosophical and includes big stars like Youssef Beh Wahby!

It’s always a pleasure beholding Mahfouz’s complex yet interesting characters come to life on the screen. What’s your favorite?