Over 3000 aspiring young leader representatives from 113 different countries around the world participated in the opening of The World Youth Forum (WYF) 2017 held last night in Sharm El Sheikh.

A good ending for 2017, hopefully getting Sharm El Sheikh back on track!  Increased numbers of tourists from different countries all over the world arrived in the past few days. Here are the best moments that social media recorded last night!

1. The Design of the Event

The opening ceremony was held in a 3D form of the Earth over a 5000 square meters land escape directly overlooking the Red Sea. The lighting reflected the unique design of the Earth’s tent in different colors and shapes.

The hashtag #worldyouthforum reached the top of the worldwide trending list on twitter as the event kicked off.

“The World Youth Forum official song” featuring El Cheb Khaled has been a huge hit so far. Ever since this song came out right before the opening of the (WYF), Egyptians have been jamming to it everywhere nonstop. It’s obviously their new favorite.

“I dream of a world” is a song that melted hearts and starred young performers from countries around the world; Egypt, Algeria, Greece, Italy, Russia and Kuwait singing at their countries’ most popular landmarks while spreading peace and unity.

No wonder why rising Egyptian star “Mohamed El-Sharnouby” stole the show with his warm voice that captured everyone’s heart. Tickets to his shows are selling out faster than ever, thanks to the love he received from his peaceful song. 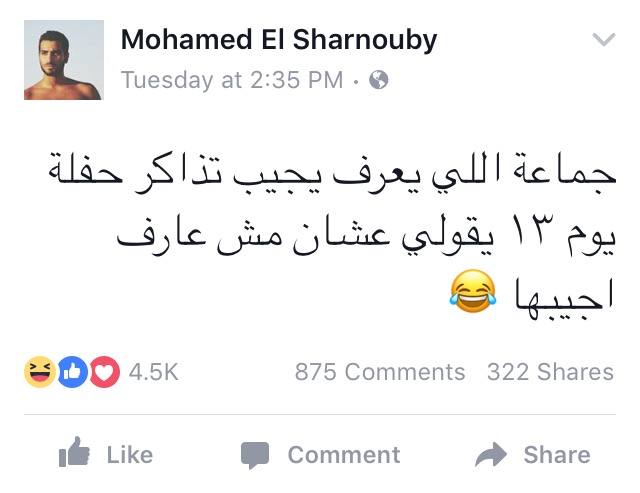 Mohamed El Sharnouby joking about how his own show tickets selling out fast.