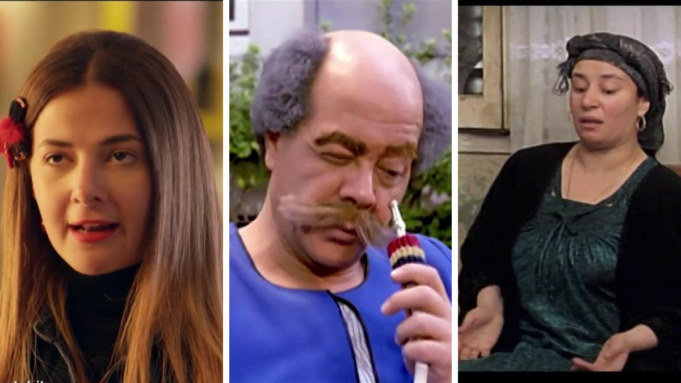 As avid viewers, we love nothing more than our Iconic Characters. There’s just something about them that makes us wait for their every next appearance in whatever movie or show. Sometimes, though, as the settings change to fit the new story-line, we find ourselves slightly wondering:

“No, that can’t be right, can it? But it wasn’t like this last time”. And, you know what? We’re right. Some of the changes to our favorite Iconic Characters have been too much to handle but none were like the changes we’ve seen in their families and their stories.

We guess you now know where this is going. It’s time to get into the “characters with the weirdest timelines” parade!

So, El-Armouty has apparently been through three families over the course of two TV shows and three movies. In the 90’s Ser El-Ard, he’d been a farmer with a wife and a daughter. Skip to Armouty’s spy mission show (yes, really), they’ve vanished.

In M3lsh E7na Benetbahdel, El-Armouty once again has a wife and son, Wahid. And in the movie after, he has a different wife and a different son. By the third movie, El-Armouty is apparently also de-aging and, honestly, we don’t know just what’s going on?!

Come on, you must have thought it too. In El-Lemby, Fransa is Lemby’s widowed mother but in 5alty Fransa, she’s never been married and is a pickpocket caring for her father and nieces. It’s largely the same character, so what’s the truth?

Well, personally, we’re in favor of the ‘secret second family’ theory but anything else will surely help.

You saw this one coming, we know. And you mostly saw this coming because like us, El-Lemby is such a weird character to track down. In every single movie he’s in, he comes with a different family and you just roll on with it.

Here’s a theory: El-Lemby is actually a code name, kind of a James Bond situation. Yes, it’s ridiculous but do you have a better explanation?

Ah, yes, the fairly easiest complex history on the list. On her first show, Lahfa was an aspiring actress who had her family, a father and two brothers, as well as her aunt and cousin.

In the second show, she just has her dad and stepmom and mentions acting exactly zero times because she’s focused on being an influencer. Just what happened? Where are her brothers? What about her cousin? Are these people dead now and the influencer schtick is an attempt to block out reality?

It’s just a mess with this one. So, he’s recruited for a top secret government mission in his first movie then apparently conspires/fights against aliens in the second. And on his third appearance, we discover he’s a third brother in the Kebeer series and is just so insanely rich for some reason.

Just what a ride! And yes, like everyone else, there’s literally no mentions of his earlier life, no matter how crazy their events were.

Confusion is the key word here. Just do a timeline chart for these characters.