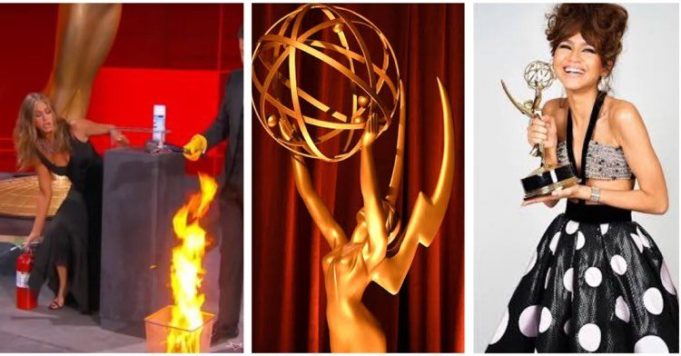 Virtual classes, workshops, seminars, and even weddings became too normalized this year due to the Coronavirus safety plans, but who knew we could actually attend a “virtual” Emmy night?

Well, it took place this Sunday the 21st of September. And, contrary to our expectations it was actually really fun. So, if you were sleeping last night or missed it for some other reason, here are 5 highlights you need to catch up on!

Jimmy Kimmel was actually the perfect host for the event. Dropping jokes every two seconds on how he doesn’t understand why they’re having the Emmys amidst a pandemic!

Jason Sudeikis taking Coronavirus tests on air, admitting it’s mandatory for all hosts to take the test every hour honestly cracked us.

And to make up for the fact that the ceremony had zero audience at the theatre, paper mockups were placed for each celebrity on the seats!

During a chat with the best actress nominee Jennifer Aniston, Jimmy Kimmel was surprised by Courteney Cox and Lisa Kudrow who both claimed they’re still living together since 1994.

After everything we’ve all seen this year, we deserved this!

The Euphoria star stole the show with her killer look at her home and yeah, also for the fact that she’s the youngest award winner in drama history!

We were all rooting for Rami season 2 and were a tad disappointed when he didn’t win. HOWEVER, this video he posted of the man in charge of delivering the awards brutally waving him goodbye just killed us!

The first part of the ceremony was mainly dominated by awards to the Canadian series to the point where we all felt like no one else will ever win on the same night!

The cast was honestly too cute and wholesome; especially when Catherine O’Hara won and ran to hug her TV husband Eugene Levy while his real-life son Daniel Levy watched in pride!

WHAT A NIGHT, HUH?