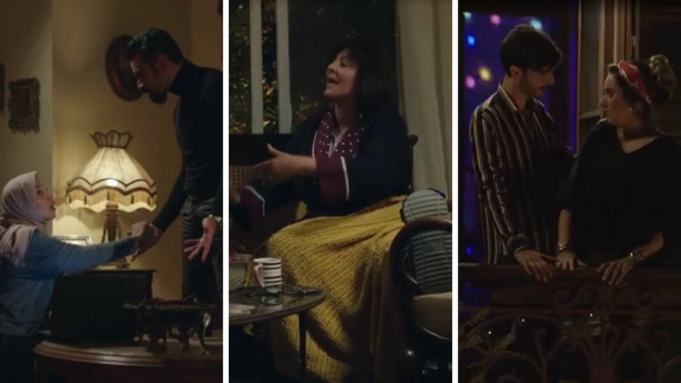 With a viral hit theme song and a widely-debated first scene, Leih La2 is clearly a show we’ll be talking about until the season finale. And for good reasons—it’s a new show with a new prompt that still manages to be as true to reality as it can be.

But that’s not why we’re talking about it today. Right now, we’re writing about this show because, in only 6 episodes, it has already explored 5 majorly important things no other Egyptian TV show has before. And we took the liberty of listing them down for your reading pleasure.

From the very beginning of Leih La2, you’ll find it clear that Radwa (Mariam El-Khosht) is in a relationship that can be described as “horrible”. Sure, they love each other but other than that, they’re not on the same page.

When she wants to visit her friend (Amina Khalil) in her apartment, the fiancé forbids her from going and even goes as far as hitting her. Just because he doesn’t agree with what his fiancée’s friend did.

And when Radwa attempts to make a stand by explaining how she can’t uninvite her best friend to her wedding, the fiancé forces her into it or “the wedding is off”—all in all, that relationship is clearly emotionally abusive and the way the show is framing it, so far, is as realistic as realistic can get.

Another major touchstone for the show is lead character Alia’s uneasiness around newer people. As she starts rediscovering herself, though, she starts hanging out with Karim, a photographer and a friend of a friend, who takes a liking to her. Even though she doesn’t explicitly say it, Alia clearly likes him too. Or she used to.

See, at a New Year’s party, Karim and Alia happen to spend some time alone talking in the balcony and that’s exactly when Karim shows his true colors. Despite no warnings and no hints given, he attempts to kiss Alia, who understandably freaks out, and explains that she didn’t want that. Instead of listening, Karim predictably storms off.

And, yes, this is one important moment because it’s the very first to talk about consent in an Egyptian TV show. Can you even imagine the number of viewers scenes like these can affect when the topic is shown and not seen?

The need for improved parent-child relationships

Let’s go back to the theme song really quick. When the hit went viral and the posts attacking the show came out, the top comments went something like this: “Just where are that woman’s parents?”. Let’s answer that now by saying Alia’s dad is dead and her mother is always there. And that’s the problem.

See, when you watch the show, the first feeling you get when you meet the mother’s character is pure suffocation. As you slowly uncover more and more about her life, you will understand why Alia runs off and moves out—she has absolutely no freedom (as a 31 year-old woman, no less) and her mother makes it difficult for her to find it.

The entire show is a message in how women can find their strengths at any age, yes, but it’s also a cautionary tale for parents. It says do better or you’ll literally burn every bridge between you and your kid.

Go ahead, make all the ‘elly adra’ jokes you want. We still know that women’s independence is something that, well, not every woman has in Egypt. Sometimes, this is because of societal conventions or familial ones.

But the point of this show is that it’s never too late to want to be independent. There’s no time-stamp on becoming the person you want to be and exploring all the things you wanted to do but couldn’t, for whatever reason. And being a woman can mean that this independence might not be easy but, hey, Rome wasn’t built in a day.

How people are still coerced into loveless marriages

If people weren’t calling out the show before it aired because Amina Khalil’s character ran away from her wedding, they were calling her out for ever agreeing to hold it in the first place. “No one gets forced into marriage anymore,” some people said. “It just doesn’t happen—it’s so early-2000’s”.

Well, here’s the thing. Our experiences aren’t universal, not even in the same country. Sure, a lot of people aren’t forced into marrying people they don’t want to marry anymore (and that’s great) but some people are still coerced into them. And not necessarily physically or even obviously—sometimes, the coercion is sinister and hidden and people don’t realize it until it’s too late.

Just remember—this is only 6 episodes in. We can’t wait to see what Leih La2 dives into by episode 10.