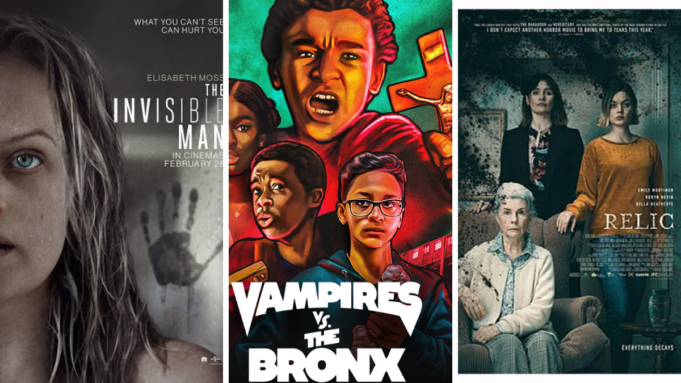 ‘Tis the season, dear readers! Yes, it is and no, it’s not a moment too soon to start celebrating Halloween. Literally, tell us what’s going to be better than getting dressed up in stunning-scary costumes and gorging yourself on candy?

Well, maybe there is one thing. Stocking up your Halloween movie arsenal for intense late-night viewings, of course! Get ready for this list — the spooky season is only beginning.

Immigration and fleeing a war-torn country mixed with a classic haunted house story? Yes, please! We’re telling you right now the chills you’ll be getting are going to be worth this movie.

The trailer alone will haunt you for days! We mean it. It’s that good.

Yes, you can say this is more of a thriller than a horror film but isn’t it really a horror flick?

You’re watching the Queen of Unhinged Women, Elizabeth Moss, in action as she flees then fights an abusive ex who somehow managed to turn invisible. Even the jump-scares are worth it!

This one will just creep up on you and then sucker-punch you in the gut when you least expect it.

Some horror films might take on fictional monsters that will never really come to life but this one is ready to turn hereditary family illnesses into something that will scare the living hell out of you.

Vampires VS the Bronx

After all this, you must want to watch something that’s chill and family-friendly and kind of funny too. You know, like a Lost Boys type of situation.

And for that, you don’t have to look further than Vampires VS the Bronx, in which a group of vampires try to invade Bronx, New York only to be stopped by a group of kids that are born ready for this comical battle.

A Babysitter’s Guide to Monster Hunting

Yeah, so from the title you might already have an idea of just what’s going on and honestly, you’ll enjoy this film when it comes out.

It’s as Nostalgic Halloween-y as it gets and you’ll be enjoying all of it (monster-hunting included!) to no end.

Your Halloween watch-list is just beginning!