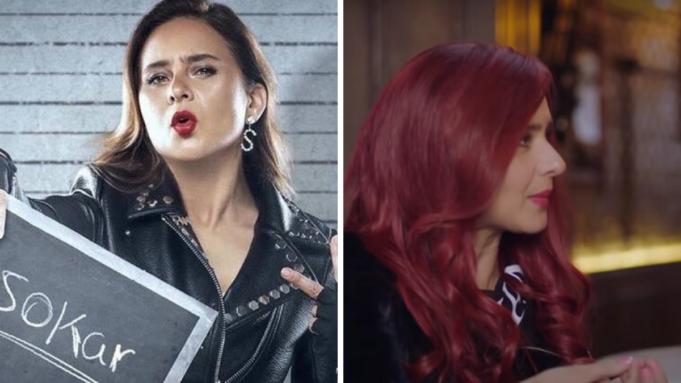 When word got out that Nelly Karim is playing a female lead in a comedy series, people were a little…suspicious. See, over the past few years, our TV relationship with Nelly Karim was a little tense.

But, the more we watched of Nelly Karim as Sokar on 100 Wesh, the more we enjoyed her character. In fact, we kind of enjoyed her so much we’ve discovered she’s this Ramadan’s best female lead!

And, yeah, we’re telling you just exactly why we think that.

She has clear goals and motivations

A trap many female characters fall into is having no personality other than what the plot and/or love story arc calls for. As in, she doesn’t exist unless she’s looking to push the plot further or to fawn over the male lead.

Sokar doesn’t do this. We spend many an episode getting to know Sokar as a con-artist and as a person. We know that she wants money to give her family a better life and to start her own beauty shop. Compare that with other female leads this year. Do we know what Yasmine Sabry’s motivation is? Do we know what she hopes to do within the company where she works? No.

She has a good side and a bad side

Isn’t it refreshing to see a character who is so three-dimensional they actually feel like a real person instead of a caricature? Sokar is a generally agreeable funny person on her downtime, but she’s also a cutthroat con-artist.

Duality exists here and in a television-scape where every female character is either a saint or the personification of the devil, well, it was much missed.

Okay, let’s not beat around the bush — we’ve all seen the subtle connection and little flirty side-chats between Sokar and Omar so we know there’s something there.

But do you know what we’ve also seen? We’ve seen Sokar go about her daily life without spending every minute of every day thinking about her potential love interest. Take notes.

She’s not too serious or too all-over-the-place

So, here’s why this point is actually important. Usually, when a female character is presented as being goal-oriented and pushing-love-to-the-side-for-now, she’s painted as the embodiment of everything serious known to man. Kind of like Riham Abdelghaffour in La Totfe2 El-Shams, if you remember her.

Sokar, however, is nothing like that. She’s goal-oriented and has her serious moments, but she also has moments where she has fun and makes jokes like the casual everyday woman she is.

Again, if you take a look at the many female leads we have this Ramadan, you’ll notice that their lives are full of events and their friendships are more like one-way transactions in which their friends help them and they do nothing in return.

In 100 Wesh, Sokar is clearly the female lead but here’s the thing. When she has problems, her friends help her and when they have problems, she offers a hand too. In fact, she makes sure they’re with her in every con and makes sure they’re okay. Isn’t that the type of friend everyone wants, really?

A breath of fresh air!