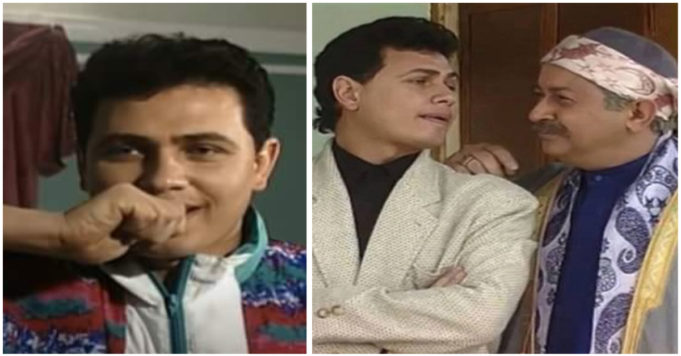 For the past month, the iconic Egyptian TV series “Lan A3ish F Gelbab Aby” has quickly become a viral social media trend and a golden source for internet memes despite being produced almost 25 years ago.

The reason, of course, goes back to two things: the fact that the episodes have been airing on DMC for over a month now, and basically because a lot of people are currently staying home [sort of quarantined] and therefore have all the time in the world for television consumption.

Amid all the internet memes and the new details we, as an audience, are starting to notice one thing the internet seems to strongly agree on.

And it’s basically the fact that Abdel Wahab, Abdel Ghafour El-Bor3y’s elder son – portrayed by actor Mohamed Riyad – and the character on which Ihsan Abdel Kodous’s novel is based, is a very annoying bloke.

Now that a lot of people are very focused about the details of the plot as well as the scenes, the analytical generation of today – aka us -, have come up with reasons why Abdel Wahab is just really mean and annoying.

1- We understand you’re ashamed of your father’s job, but why be mean?

Okay so the fact that Abdel Ghafour El-Bor3i’s main job is scrap, which is not the classiest thing in the world, according to Abdel Wahab, doesn’t give him the right to keep treating his father in the worst way possible.

Like, the man is 100% self-made and has endured struggles for you and your siblings to have a better life. In our opinion, what he deserves is respect and nothing less.

2- Who doesn’t tell his father he’s getting married?

In the episode where Abdel Wahab gets married to Rosaline or Amina, he gave extremely short notice to his mother and sisters while not even bothering to mention it to his father. Absolutely brutal, if you ask us.

Not to mention that he only cared to invite his AUC student sister Nazira and not even his mother and other three sisters, whom he seems to be always ashamed of, for obvious reasons from his own point of view.

3- Too obsessed with the West

Well, that one was clear as day because basically the only thing he liked about Rosaline and made him move super fast to marry her is her Western mindset and the fact that she would’ve been his one-way ticket to the United States. Tough luck, Houba.

It’s honestly awkward and humorous how he’s easily upset by anything his family says. For example, at the dinner table, they all tend to happily engage in both light and serious discussions with no hard feelings whatsoever.

However, when it comes to Abdel Wahab, he just storms off and leaves the table whenever anything is directed at him. Sensitive much?

5- Doesn’t have a purpose, despite nagging about it all the time

So we all know that his main goal is to not live in his father’s shadow (Hint: the title), which is understandable. But even though he left for England to study and get a master’s degree, he never really did anything. He only took the chance to see the world, as he claimed.

For the entirety of the series, he was too busy complaining and thinking about the idea of shunning his father, not living in his shadow, and basically doing something completely different in order to avoid being like him – in any way.

And because of that, he never really had the time to actually think of what he can do to better himself and have a clear purpose in life. He was just blinded by the unnecessary drama that falsely led to hate.

In conclusion, we do understand that “Lan A3ish F Gelbab Alby” is based on one of the greatest short stories ever, and the series itself is just beautifully executed with all the characters and extraordinary actors.

That being said, the problematic character of Abdel Wahab needed to be discussed, even if it’s fictional – mainly because it’s also too realistic.

Let us know in the comments whether or not you found Abdel Wahab annoying and why?