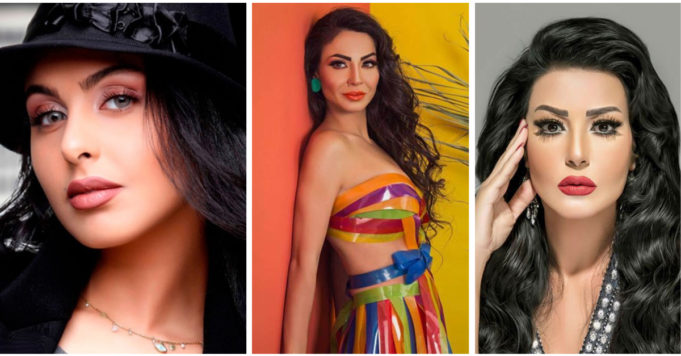 Back in the early 2000s and up until now actually, a number of Arab stars have made it a mission to leave a mark in both the acting and singing careers! However, as much as there are a few on the list who are good at acting, we can’t say the same about them in music.

This is why we made you a list of the Arab stars who should’ve stuck to one career, and not two!

It’s clear that what pushed El-Khashab to pursue a music career alongside her already-successful acting one, was the movie “Bahebak Wana Kaman” where she sang a duet with Mostafa Amar.

Not long after then, she released a whole album of her own as well as a few singles over the past couple of years and up until very recently.

And needless to say, none of her songs stuck with anyone and even her voice was pretty much no one’s favorite – for obvious reasons.

Lebanese star Dolly Shahine started her career as a singer by releasing an album in 2009 and a couple of music videos. Her acting career shortly followed and picked up as she took various roles in different movies as well as television series over the years.

Let’s just say Dolly was a much better actress than she was a singer. Maybe that’s why she only released one more album in 2017, and a couple of songs featured in the movies she starred in.

Lekaa el-Khamisi has always been a great addition to a lot of our favorite movies and television series. However, it was a bit weird when she released a single of her own along with a music video for the Arabic animation movie “The Knight and The Princess“. Her voice didn’t sound bad to be honest, however, Lekaa has also appeared in multiple talk shows where she sang a bit – and let’s just say it was not ideal.

Anyway, like the rest on the list, Lekaa is a much better actress than a singer – so, she chose the right career!

Ever since she became part of the entertainment scene back in the very early 2000s, Amy Salem was known as an actress, as she took part in a number of movies and TV series. But she also, shortly after, released a few singles, and unfortunately, none were successful!

Okay so we know Nicole Saba started strongly as a singer and not an actress. From the two albums she did with her Four Cats band to the single album she released on her own as well as a number of scattered-around songs every now and then.

While we can’t deny that a couple of the actress’s songs became hits and may even be stuck to our minds till our current days like “Ya Shaghelni” and “Ana Tab3i Keda“; still her musical career never really blossomed nor can her voice be considered singing-artist material.

We were first introduced to Mais as the actress and Mai as the singer. But things got a bit mixed up along the way when both sisters were basically doing both professions simultaneously, at some point. We have to say, Mai is not a bad actress, and she has a really good voice.

That being said and although Mais only had one successful hit, we think she should’ve really stuck to acting because well, as they say: “Pick what you’re good at and do it”.

Who else do you guys think shouldn’t have pursued a singing career and would’ve been better off sticking to acting, instead? Or maybe the opposite? Let us know!