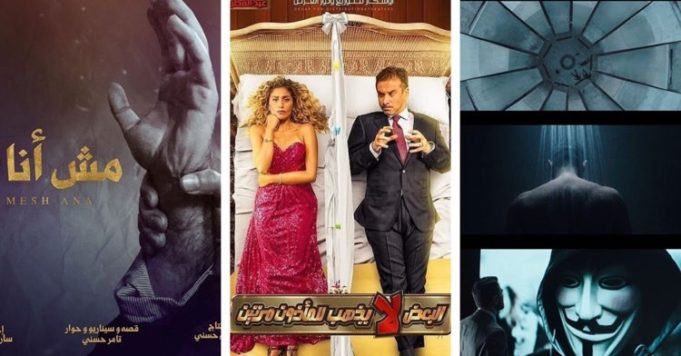 Eid was all-kinds-of-different this year. One of the weirdest things about it was probably the closure of all movie theaters and the postponing of Eid premieres, indefinitely, and breaking the annual tradition.

Some pretty big productions were still in the making and some are already finished. So, let’s look at the list of Eid movies we hope we’d be able to catch in cinemas before 2020 is over. Shall we?

All eyes were on Dina El Sherbiny and Karim Abdel Aziz’s movie for obvious reasons, of course. Remember the 1978 movie El Ba’d Yazhab lel Ma’zon Martyeen? Well, add the word “La” and you have the 2020 spin of it. A marriage comedy that clearly stands for everything opposite to the original movie. Interesting, huh?

For quite some time now, rumors have been going around about a new collaboration between Ahmed El Sakka and Mona Zaki. Turns out, this movie is the bridge bringing our favorite cinema couple after 3 years apart!

After 14 years since her last movie on the big screen, Tamer Hosny teams up with beautiful Hala Shiha for their film Mesh Ana. Maged El Kedwany and Sawsan Badr are among the cast and, what’s also worth mentioning is that Hosny wrote this movie himself!

Ahmed Ezz is among those stars whose movies were put on hold. El Aref of Awdet Younis is a thriller that stars Ahmed Fahmy, Mahmoud Hemeida, and Rakeen Saad. This is one you don’t want to miss!

A while back, pictures of Haifaa Wahby, Moustafa Khater, and Arwa Gouda were flying about, announcing a new film in the making. Now, we know from the thrilling trailer it’s done and ready but we’re just going to have to wait like everybody else.

Did you know Yousra and Asser Yassin were dropping a Eid movie together? Right before the Covid-19 outbreak, Yousra was making a cinematic comeback with Saheb El Ma’am. Her last movie was “Game Over” that premiered 8 YEARS AGO!

The silver lining to this is that we definitely won’t be short on exciting movies when cinemas are back in the game!