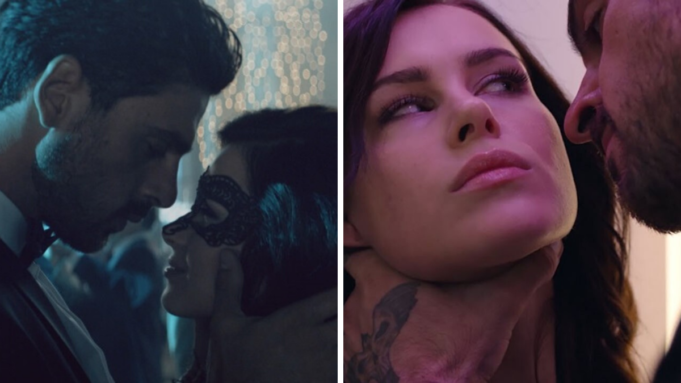 Yes, it’s happening. We’re talking about this movie and if you’ve seen it (or read the plot) then you’ll see why we’re not very happy with it. See, for a movie that has nothing but its lead actor’s face, 365 Days (or 365 Dni, in Polish) has certainly made an impact in Egypt.

And no, you shouldn’t even attempt to watch it. See, it’s so harmful, we have 6 whole reasons why you should avoid it.

The movie is literally Stockholm Syndrome

Okay, so the whole story is that Massimo, an Italian mob boss, kidnaps the female lead, Laura, so she’d fall in love with him. After a year (hence the name – not a shoutout to Ahmed Ezz’s attempted comedy), if Laura is still not in love with him, she gets to leave.

And here’s the thing. Massimo is literally trying to kick-start Stockholm Syndrome, which is when hostages start feeling affection and/or love towards their kidnappers because of misplaced emotions.

And while we can’t count the many times Massimo harasses and preys on Laura, we know for sure that the fact that she’s seen as ‘enjoying’ that, even when she does say no, only pushes harmful images that will affect audiences. Yes, people internalize these things.

We cannot let this slide. He shoves her — he physically and emotionally abuses her, all while basically sexually assaulting her and treating her like a child and a trophy at the same time. Yeah. It’s a lot.

And what does this bit add to the story? Nothing. Because it’s not a story about a woman who escapes a kidnapping/pseudo-abusive relationship. It’s a story that literally says “hey, do you know that person who treats you like dirt? Stay with them if they’re attractive.”

If you read the previous point and you kinda still like the movie, you may have one defense already prepared. Massimo is a “bad boy” and this is kind of the point. He’s dangerous and fun and exciting, right?

Well, no. He’s a criminal and his first introduction to us is as a mob-boss-to-be. His goons drug Laura and he’s keeping her against her will. Not to mention all the sexual assault stuff we went into above. It’s very obvious.

Okay, so while we’re at it, let’s examine the “love story” in more detail. Laura has a year to fall in love with Massimo, but you know what? He’s already been in love with her for five years…because he had hallucinations of her while his father died in his arms?

Weird, we know but wait, it gets weirder. The minute Laura wakes up in Massimo’s palace, she finds a giant portrait of her plastered to a wall and for some reason, this is shown as the height of romance when it’s just odd and creepy.

Unrelated to story, but the movie literally has a score of 0% on Rotten Tomatoes

If none of what we’ve said deterred you from putting 365 Days on your watch-list, consider this. That movie is one of the very few movies on earth that has a literal 0% on Rotten Tomatoes.

Do you know what that means? It means that Ba7ebak Wana Kaman could probably have a higher score if it got rated.

So please, save yourself the trouble. Save us all.