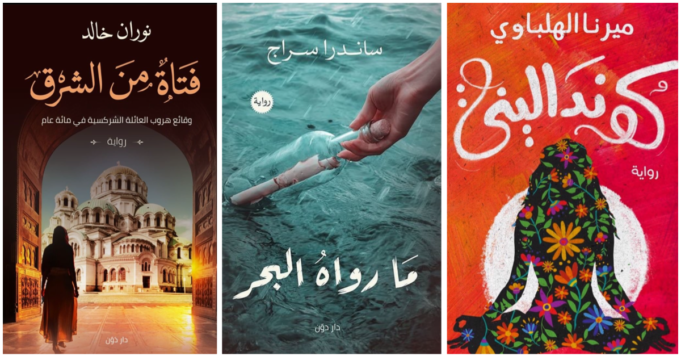 And between the hundreds of books that are either debuting or are on display there, you’ll find a number of them worth grabbing.

In order to save you some time and help you pick out the best ones, we thought of putting together a list of the top 9 books creating a social media hype and selling in big numbers at the book fair over the past few days.

Mirna El-Helbawi’s first bestselling novel “Mor Methl Al-Qahwa, 7lw Methl El-Chocolat” is actually still being reprinted and sold to this day, even though it was published in 2018.

This year, her second ever novel titled “Kondalini” is already living up to the success of the first one, with a large number of people praising it on social media and waiting in line at the book fair to get their hands on the signed copies!

“Kondalini” is about life and self discovery, so get ready for some “Eat, Pray and Love” vibes!

All three of them gained huge success, especially “Ma La Nabouh Beh“; which is still selling to this day, reaching its 23rd edition last October.

The romantic novelist’s newest release is titled “Ma Rawah El-Bahr“; it’s a dramatic love story about lost hope told by none other than the sea itself.

This one is not a novel; it’s a comic book that a lot of readers and social media users are swearing by at the moment!

This comic book is written by award winning comic artist Deena Mohamed who released the first part in 2017 and the second part with the same title, just last week.

Set in a fantasy world, “Shobeik Lobeik” is all about actual dreams and wishes placed in glass bottles. You could buy them, but only if you have the money. What a concept!

The book fair wouldn’t be the same without a new Nouran Khaled book taking part in it.

After “Galaletha” and “Tard Yasel Mota2akheran“, this time she’s written an intriguing story with a historical feel to it about different generations of Muslims from Bulgaria.

Between love, war, escape and resistance; this novel is a whole other world.

Yet again, Mona Salama stuns people with another one of her novels. From “Kighar” to “Thani Oxid El-7ob” and more; many readers enjoyed her earlier releases.

This year, Salama had put out a mysterious novel about a woman dreaming of becoming a lady living in a castle. But who knows what the walls of this castle are hiding? Everything is not what it seems!

Donia Kamal is a TV producer, writer and an award winning novelist who had released books like “Hekayatan: Heya Wa Doha” and “Cigara Sab3a“.

This time, she takes her readers on a journey full of hope, love and lost memories through a number of different letters sent out to different people in our protagonist’s life.

We’re pretty sure everybody has either read “Hepta” or seen it on the big screen! And for those who don’t know, Mohamed Sadek is the author of the unique story.

This year, he has released “Ezma“; a story about love, hope and passion. But mostly, it’s about fear and how to try and get by in life without it. We can’t wait to read this one, can you?

Belal Alaa is a young well known journalist and blogger. His newest book “Lan Nasna3 El-Falak” is already getting all kinds of praise on social media because of how beautifully written it is.

Don’t miss grabbing this one, we promise it’ll make you fall in love even more with books and reading!

We had to finish off this list with an amazing poetry book because everybody needs a little poetry in their life to brighten up their day. Are we right?

Award winning writer and poet Mostafa Ibrahim just released his newest poetry book and that one, you really need to grab!

Let us know in the comments which one of those books you’re going to get your hands on. And if you read any of them or have any other recommendations, don’t hesitate to tell us!