Identity Magazine
Home Entertainment 7 Reasons Why “Russian Doll” Is Going To Be Your Next Binging...
Facebook
Twitter
Google+

On Friday, February the 1st, Netflix premiered its new hit show “Russian Doll”. Shortly after, VERY shortly after, everyone started raving about it.

I am sure you have already heard of it by now, or stumbled upon it on your Social Media Newsfeed, you are probably even wondering what’s all this fuss about, right?

Well, no more wondering, we are here to tell you all about it and tell you why this “Russian Doll” deserves to be your next binging obsession.

And in an unprecedentedly short amount of time, Russian Doll got #CertifiedFresh and got a 100 % score on Rotten Tomatoes critics score.

I mean come on! How often does that happen?

The main character of the show “Nadia” is stuck in an infinite time loop where she keeps on dying then reawaking in the same day (her 36th birthday), unharmed, only to die, again and again, repeating the same events and dying again at the end of each night, or as Netflix describes it “staring down the barrel of her mortality.”

Yes, the plot could be considered to be inspired by the “Groundhog Day” movie, or “Alf Mabrook” to us Egyptians.

However, Russian Doll manages to put a different spin on the plot. In its eight-episode first season, it doesn’t have one, boring or insignificant turn of events!

Although the plot could be a bit familiar, the fast pace if the show will leave you at the edge of your seat binging the eight episodes in one sitting to find out just what on earth is going to happen in the end!

Russian Doll pretty much has everything a TV show needs to turn into an obsession; jaw-dropping horror, gut-wrenching drama, and belly-aching dark comedy.

In just the eight episodes of the show, you will get to experience an epic emotional rollercoaster. You won’t know whether to sympathize with Nadia through her never-ending suffering or laugh at her twisted cynical jokes! One thing for sure, you will be hooked from the first episode!

Even if you are not a TV series person, you will still fall in love with Russian Doll for its dialogue alone!

Don’t believe us? Here is a proof:

I'm honestly obsessed with how insanely smart Russian Doll's dialogue is — here are a few of my favorite quotes pic.twitter.com/CI12QHNwlj

Seriously though, why can’t talking in real life be like that?!

One thing everyone who has seen the show agrees on is that the best thing about this gem of a show is lead actress Natasha Lyonne who also stars in another Netflix hit, Orange is the new black.

Mesmerizing, compelling, startling, haunting, pitch-perfect, are all words that have been used to describe Natasha Lyonne’s performance in Russian Doll.

She masterfully manages to give life to every single complicated detail about Nadia, yet make it seem so simple.

Here are some of the things Critics used to describe Natasha’s performance:

“She’s rude, arrogant, and clever with a gluttonous for booze, drugs and Red Bull. She cracks jokes all the time. She’s a mess and she’s marvelous. The kind of person you don’t want to be but yet envy for her recklessness. But under this tough surface, she is hiding a broken heart that’s terrified to love again. So, she keeps people at a distance with her jokes and apparent apathy. But she will learn to open up. this is definitely her best work yet.”

“It’s a performance where the actor understands the character so well, down to every little gesture she makes, every twitch of her face, that it’s startling, at times, to remember she’s fictional!”

“More than anything else, Russian Doll is a showcase for Lyonne, who bites into this role like ripe fruit, baring her teeth.”

Yes, her hair! No, we are not kidding!

Every once in a while in the history of TV comes a character with a hair so good, it needs its own spotlight! And Natasha Lyonne’s hair in Russian doll in one of those hairs!

Her thick, gravity-defying hot red curls falling in a mess around her face is the perfect reflection of Nadia’s messy reality and chaotic reckless personality.

Warning: You will find yourself staring at it and hypnotized by it throughout the show, don’t try to resist, we’ve all been there.

In case you still don’t believe us, and you’d like a second opinion, here are a lot more opinions: 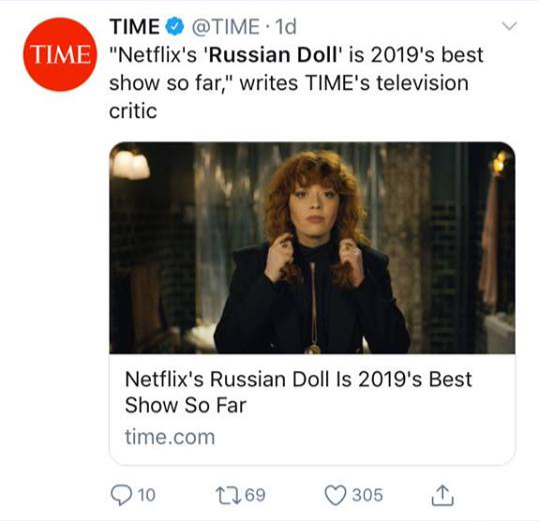 Yeab, that sounds about right!

We warned you, you won’t be able to stop binging.

We feel you, Emily, we feel you!

I guess that’s enough proof for you to hurry up and start streaming, like RIGHT NOW!

Another reason for us to be very excited is that the creators of Russian Doll had already pitched Netflix on multiple seasons of the show. They were just waiting to see the response to the first season will be like.

Considering that everyone absolutely LOVES it, do we dare to say a second season is on the horizon very soon?