Ramadan is here and so are the days when you find yourself enjoying Iftar/Sohour completely on your own. The idea often strikes you, and you find yourself by the phone ordering food. The thing is you never expect the delivery guy to play a role in your life or engrave an incident in your memory. In Egypt, the delivery guys seem to play a bigger role than their assigned duties! We thought it might help you pass the time fasting to read what 6 people had to share about awkward situations they encountered with the delivery guys! 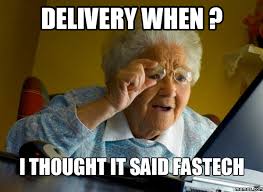 1.’ I ordered from a fast food restaurant and the delivery guy came with the wrong order. When I told him he had the wrong order, he admitted that he switched orders and asked me to accept the order and not tell…the thing is I did!’ – Nahla 25
2. ‘I once ordered koshary from a famous place, and then when I went to my room to bring the cash, I literally came back to find the guy inside my apartment checking out an antique piece of furniture. I froze in panic, but the thing is he was so casual about it and went back outside…I was too speechless to comment.’- Nour 31
3.’ There was this time when I was with my friend in the living room which had a clear view of the front the door, and my brother opened up for a delivery guy without telling me. I was belly dancing and trying poll dancing with my friend…Yes, the delivery guy saw me and my brother wanted to die.’- Farah 21
4.’ There was this time when I ordered fast food, and the guy was giving me weird looks while delivering the order. When I was finally tipping him, he asked me to take the money back and told me he wanted my phone number instead. I said I’m sorry, but no! He told me he could always act lost and get it from the customer service, which was sadly true!” – Rania 34
5.’ This was very weird to me….I was waiting for an order which was very late, then when the guy finally showed up, he looked so not okay, so asked if he was? He burst into tears and told me that he just discovered that his fiancee had a history. I felt sorry for him, but I was more like cheer up and can I have my order or I’ll eat you alive!’ – Hala 27
6.’ I once ordered two sundaes from a very famous fast food chain, and when the delivery guy came he looked at me in disgust and said I came all the way for this??…I wanted to slap the guy, but I didn’t.’- Yasmeen 19 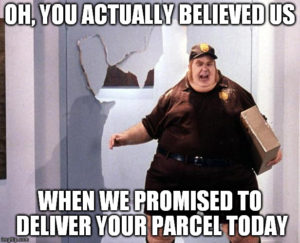 To be honest, we received tons more of those awkward incidents. The only common part was not reporting them. When the delivery guy tries to be rude or crosses his limits, you should always report the incident to save someone else all the awkwardness, but bear in mind it’s not an easy job after all especially in Egyptian traffic!