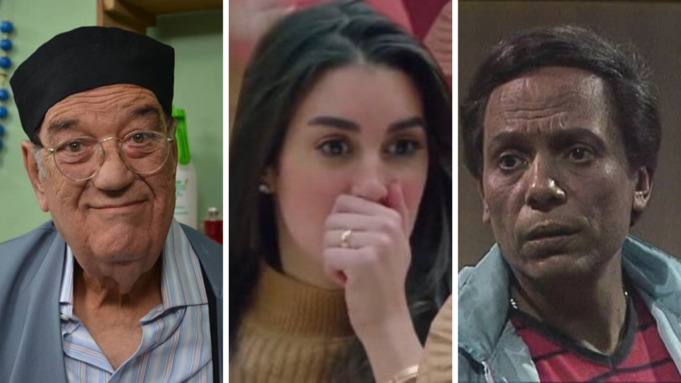 We want to ask you something. Have you ever imagined a world in which certain iconic roles were played by different actors?

If you think this isn’t really all that important, take a moment to imagine Mido Mashakel played by Mohamed Heneidy instead of Ahmed Helmy. Did you do that? Good. So, you’ve imagined how different everything would really be.

But here’s the thing. Heneidy was never approached for Mido Mashakel…but that doesn’t mean that there weren’t any roles that got re-cast at the last minute. Just check out these 8 iconic roles.

Among the rest of the stories mentioned here, this one might be the most recognizable. Hassan Hosny was actually the first actor to be approached for the Ibrahim Sardeena role in Lan A3eesh Fi Gelbab Aby.

So what happened? Well, Hassan Hosny wanted to negotiate the salary and the producers weren’t having it so they simply called another actor, Abdelrahman Abo Zahra. And the rest was history.

Since we’ve all seen this show on TV about half a hundred times, we think we can vouch for the unexpectedly brilliant duo that was Abla Kamel and Somaya El-Khashab.

But did you know there was a chance we wouldn’t have even seen them? See, before this show was given to the wonder duo, it was originally pitched to Nadia El-Gendy and Nabila Ebeid!

Don’t worry, no one remembers this either. Before Hassan Mostafa and Adel Imam signed on, their roles were played by the renowned Abdelmen’em Madbouli and Salah El-Sa’dany.

So, what happened? Well, the first duo played the characters for about a month before both leaving the play because (and you won’t believe it) the play actually failed commercially.

Do you remember Safroot, played by Ahmed Zaki in the Batneya movie? Yeah, well, it wasn’t actually meant for this particular actor. It was actually first offered to Mohey Ismail, who refused the role because, according to him, it wasn’t pivotal to the story.

We’ve all seen the great TV adaptation of Naguib Mahfouz’s Afra7 El-Oba, right? If you did, you must remember some things like the monologues and the complex characters…and the fact that Sabrine wasn’t the first choice for Haleema El-Kabsh.

Yeah, this role was actually for Laila Elwi, who later stepped down to focus on her other show, Heya W Da Vinci.

Take a moment to recover from the shock. We know this might be startling to some people, but if things had went according to the original plan, we might have never had Ra’fat El-Hagan played by Mahmoud Abdelaziz.

See, Ra’fat El-Hagan was meant for Adel Imam. The star just got into a dispute with the writer and stepped down, starting a tradition of leaving iconic roles for other actors — no, seriously, just look at El-Kitkat.

Instead of signing on to play Nazli in Grand Hotel, Yasmine Sabri stepped down to focus on El-Ostoora with Mohamed Ramadan. And then Amina Khalil came in.

And, yes, it’s a bit weird how someone wrote the script for a struggling housewife who goes on to be a drug-lord and didn’t consider Nadia El-Gendy first but it all worked out in the end. Balance restored!

Can you imagine if any of these roles were actually played by the original actor?