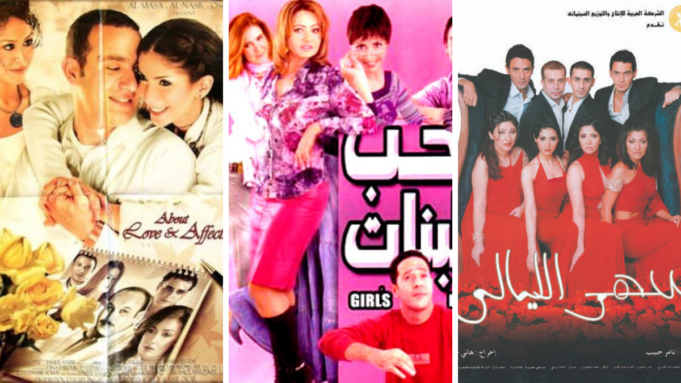 As avid film watchers, we’ve grown to appreciate a lot of things about the cinematic industry. The delivery of certain performances, complex scripts, and good casting are only a few of them, sure, but we’re here to talk about something we only appreciate when it’s done right:

Casting a good ensemble. Yeah. You might not think about movie ensembles that often but when we see movies where all characters have equal parts and they all suck, we tend to think about the concept a little bit more.

See, not every ensemble is a good ensemble. You’ll see what we mean when you see who we picked out for the best Egyptian movie ensembles of all time.

Usually when we talk ensembles, everyone’s first thoughts go to the classic that is Sahar El-Layali. And for good reason, it was one of the boldest films involving ensembles and relationship struggles out there. And the ensemble cast was perfect for the job!

Ensembles work best in the ever-loved Egyptian genre of social retrospection, don’t they? See, it was kind of created for that purpose.

Just look at Tharthara Fawq El-Nile, a movie discussing our society’s latent 50’s-60’s decadence with a generally amazing ensemble, and you’ll see what we mean.

Who can forget this Rom-Com-y classic? No one, that’s who! This movie had it all in terms of plot, characterizations, and love arcs.

And guess what made it as top tier as it was — that’s right. The wonderful cast involved!

Yes, yet another romance-movie ensemble and guess what? You won’t mind because the entire nation pretty much agrees that 3an El-3esh2 Wel Hawa is an iconic movie full of iconic moments (hello, crying Sakka meme).

But can you imagine this movie with a different cast? We’ll answer. No, because it’s just perfect this way.

A mostly female-led ensemble cast for a movie that is as thought-provoking as it is amazing, E7ky ya Shahrzad quite literally does it all. It brings out the hard-hitting stories and doesn’t shy away from details with its trusty ensemble acting through it all!

Iconic and intense, Bein El-Sama Wel Ard limits the audience to only one location, so it’s pretty important that the cast chosen to translate all the movie’s emotions and stories be top-notch. And that’s just what that classic cast was!

Say what you want about the movie (let’s face it — it just invites bad thoughts), but the ensemble did all it could and more. It’s even made the movie so realistic, people keep watching it even though they already know what’s about to happen by heart!

The first and final comedy ensemble on this list, this once-upon-a-comedy trio that was Ahmed Fahmy, Hesham Maged, and Chico delivered their best performance in this adaptation of the Night at the Museum. We bet you can remember the laughs.

The second movie by ensemble director Kamla Abou Zekry on this list, Wahid Sefr just brings out a lot of sidelined day-to-day stories out to the light and on the way, makes for the one interesting cinematic experience.

And, yes, the ensemble for this movie takes some of the credit for that. For lack of better words, the cast bodied their roles.

What’s the best ensemble out of these?