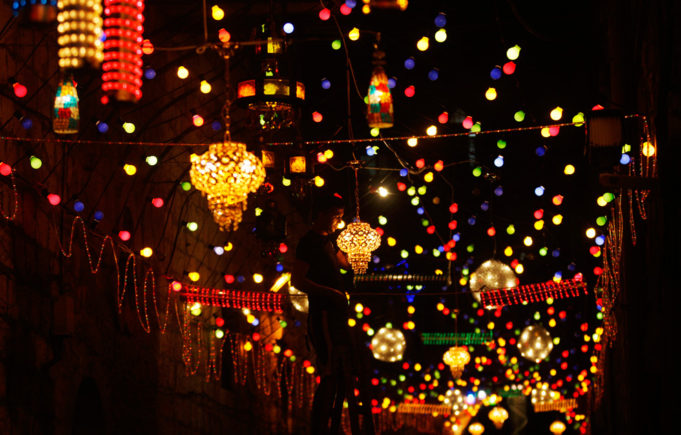 Ramadan is loaded with a joyful spirit and delightful traditions practiced by Muslims worldwide. What makes the celebrations unique and vibrant in every country, is the fact that the holy month has blended with the traditions varying from one region to another. And though Ramadan is a reuniting time for Muslims around the world, in terms of adopting similar daily routines and religious practices, most communities retain their own special ways of celebrating the holy month, with their own unique cultural traditions. Check out 9 of the most pleasant customs practiced by over 1.5 billion Muslims during the holiest month of the Islamic Calendar.

In the Gulf countries, children roam the streets of their neighborhoods wearing their traditional costumes, knock on the doors of their neighbors and sing for exchange of sweets, candies and chocolates. Sounds familiar? That’s a fun tradition to reward the children who fast during Ramadan as it also aims at educating the public about the month. While being practiced throughout the Arabian Gulf countries, some aspects such as the timing and the name differ from country to country. In the UAE, it is called ‘Haq Al Laila’ and celebrated two weeks before Ramadan. And in other countries, like Kuwait and Qatar, it’s called ‘Garangao’ and is celebrated after the breaking of the fast two weeks into the holy month – on the 14th night – for three days. 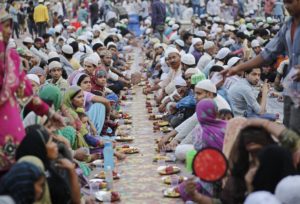 Whether a Muslim or not, residing in Delhi during Ramadan means one thing: Iftar picnics. On Ramadan evenings after Maghreb, Indians tend to gather in the alleys and streets of the old walled city to break their fasts with picnics on mosque terraces and treats from street vendors. The Jama Masjid, located in the heart of Old Delhi and considered as the grandest place in the city to perform Maghreb prayers, is the center point around which all the allies are situated. The 400 year old mosque itself can accommodate up to 25,000 people in its courtyards and is usually filled to capacity when Ramadan falls in the summer months.

Locally known as ‘Roadha Mas’ , Ramadan practices in Maldives are interestingly enthusiastic. Various local dishes such as ‘kulhi boakibaa’ (fish cake), ‘foniboakiba’ (a flour cake) and ‘gulha’ (fish balls) are prepared for the Iftar. Following that comes the reciting of the Raivaru, Ramadan related poetry, by the the poets. It’s a Maldivian ancient tradition form of poetry cherished by the local Maldivians. It is composed of three or more lines with the distinct rhythmic pattern of poetry.

Unlike their normal daily routines, the people of Algeria stay up all night during Ramadan. As ravishing as it may sound, Algerians organize religious festivities throughout the night up until Sohour. The streets are always active and very crowded all night long; the markets are open and people wander around bonding together. As a consequence, work always starts an hour or so late during the holy month in Algeria. 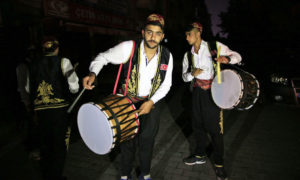 We all know the pre-dawn caller or the ‘Mesaharaty’, but what we don’t know is that the tradition of these drummers dates back to the Ottoman Empire. And despite the fact that this tradition continues to this day in Egypt and many Gulf countries, Turkey is paying much more attention to it. An official costume and membership card for these drummers have recently been introduced. Every night before sunrise and for 30 days straight, the caller wearing Ottoman attire will walk through the streets playing the drum enthusiastically to wake people up for the final meal before the fast begins.

Morocco prefers to be ahead of time when it comes to Ramadan preparations. While most countries start the preparations for the holy month just one or two days ahead of it, Moroccans begin such practices two or three weeks earlier. They paint their houses, clean them up and shine their kitchen utensils. In addition to that, and in order to trigger the holy atmosphere earlier, they start inviting their friends and relatives to feasts.

In Java Island of Indonesia, normally a week before Ramadan starts, the Nyekar ritual takes place. The ritual consists of paying respects to the forefathers through visiting the graves of the dead relatives to decorate them with flowers and pray. The cemeteries across the island become crowded with families, and some locals also pay a visit to the graves of ancient kings and revered public figures. 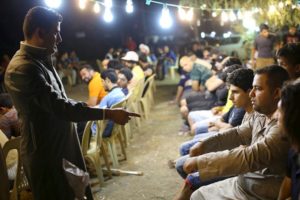 Owning to distinct customs, a popular game called ‘Al Siniya’ or The Tray is played in some parts of Iraq during Ramadan, and the ring game in other areas. After having Iftar, men would gather around to play this hours-long game with their family and friends. While the aim of The Tray game is for players to find the hidden dice under one of the several overturned copper cups on a tray, the ring game consists of two teams where one member has to hand over the rings to another member of the same team and the opposite one has to guess that who could possibly be hiding them. 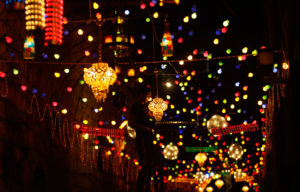 Last but definitely not least, the Fanous is the Christmas tree to Ramadan. Cairo is considered the birthplace of the Fanous; it has a special place in the heart of the whole Egyptian Ramadan traditions system. The history of the lanterns lighting is believed to date back to the Fatimid era when hundreds of lanterns were used to well-lit the streets of old Cairo during the nights of Ramadan. Each year, the streets of Egypt rejoice with Ramadan celebrations and decorations by these lanterns.

Finally, such diversified traditions and customs add to the beauty and magic of this holy month. It doesn’t really matter in which country you’ll spend your Ramadan, since this month has the power to bring along with it a great sense of peace, cheerfulness and tranquility, besides unifying the Muslim world and spreading love and affection.