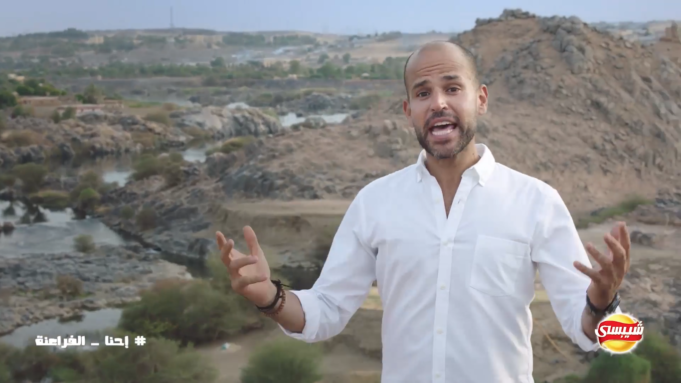 Almost a year ago, we were introduced to a song that left us dreaming of our own love lives. Egyptian singer/songwriter Abu has touched us and in all ways possible. Just last week, Abu released his newest song, Etfar3an, and we sat with him with utter excitement to find out all about it. With a proud voice and ideology, Abu explained to us what his country means to him, and what he plans for this song. He is not only an inspiring artist, but also a deeply inspired one. Here’s what he had to say.

What first inspired you to start your career?

All my life, I’ve been inspired by music. I’ve always loved to write and make melodies for my writings, but my first step, or my first inspired move was back in 2012 when I wrote a song called “El Nas Mabterhamsh”. I recorded the song, and my brother uploaded it online. The song went viral, and so many people were highly touched by it. I then realized that I could really touch people’s hearts by just doing my art. I felt like this would be the best thing I could ever do for the people of my country.

Are you inspired by your country?

So much. I’m in love with my country. Just thinking about our history, our culture and the subcultures that lie within it, the unity, the arts, everything. Just traveling around Egypt makes me happy. The energy that lies in the people of this country is euphoric to me.

What is your favorite place in Egypt?

The south is definitely my favorite. Marsa Alam and Siwa are my absolute favorite spots; I find serenity in being there.

What are the things that inspire you the most and make you proud to be Egyptian?

First, the Egyptian arts. Every Egyptian musical artist inspires me, like Mohamed Fawzi. Even Farid EL Atrash, who wasn’t actually Egyptian, but his music was so Egyptian you couldn’t feel it. Second, the Egyptian character. Egyptians are just so funny and cheery, might be a little lazy, but they’re always there for you. It’s like there is a gene that goes through all Egyptians without missing one of us.

Are you originally a football fan?

Yes. I am not a fanatic honestly, but I am an Ahlawy, who cheers for Juventus, and recently, Liverpool for Mohamed Salah.

How did you feel when you first thought of your song?

I have a problem with how people relate to our ancestors – the Pharaohs to just the pyramids and our beautiful monuments. I wrote this song to tell Egyptians Etfar3an, be proud of who you are and where you’re from. It was very important to me to highlight the point that, we as Egyptians, always believe that we can’t do something, but when we do actually do it, we do it well. We tend to shock ourselves with our achievements.

How do you think your fans are going to react to the new song?

I hope they like it, because I put so much effort in crafting, lyrics, and filming.

Did you enjoy writing and recording Etfar3an?

So much. My favorite part was writing the song, and approaching the idea in the beginning.

Who are your musical influences and inspirations?

My foreign inspirations are Leonard Cohen, Don Mclean and Bob Dylan. I love Jack Johnson. I also love Jason Mraz, as pop and cheesy as it my sound, and Coldplay.

Do you think this song will leave us dreaming like 3 Daqat?

3 Daqat was a romantic song; it was meant to make you dream. Etfar3an is a more enthusiastic song that’ll surely spike a lot of emotions similar to or even more than 3 Daqat.

Should we expect a new single or album soon?

Yes, definitely. Summer 2018 is full of Abu action. Later in the summer, a new song – Hateegy – will be released. It’s a lyrical collaboration of me and Menna  EL Qeiy. I’m so excited for the song, and the surprises that will roll in straight after.

We’re so excited about Abu’s new music and can’t wait to hear what he has in store for us.