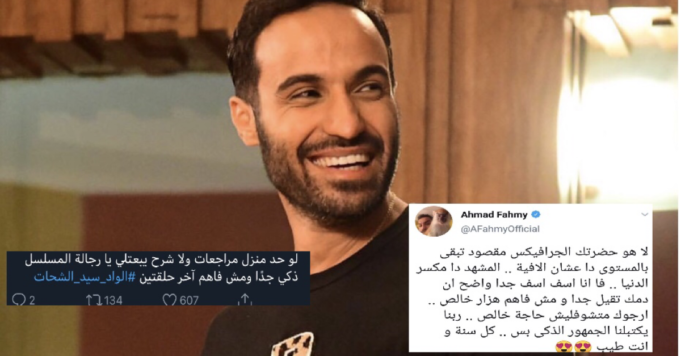 Ahmed Fahmy has a comedy show airing this Ramadan called “El-Wad Sayed El-Shahat“; alongside his fiance and co-star Hannah El-Zahed.

Like any show, it has fans and viewers. But there are also people who simply don’t like it. And for some reason, Fahmy thinks they don’t have the right to criticize it.

Last week’s episode was a comic imitation of the famous anime “Captain Magued“. Fahmy, El-Zahed and Bayoumi Fouad were all dressed up as the cartoon’s characters, imitating their attitude and language. 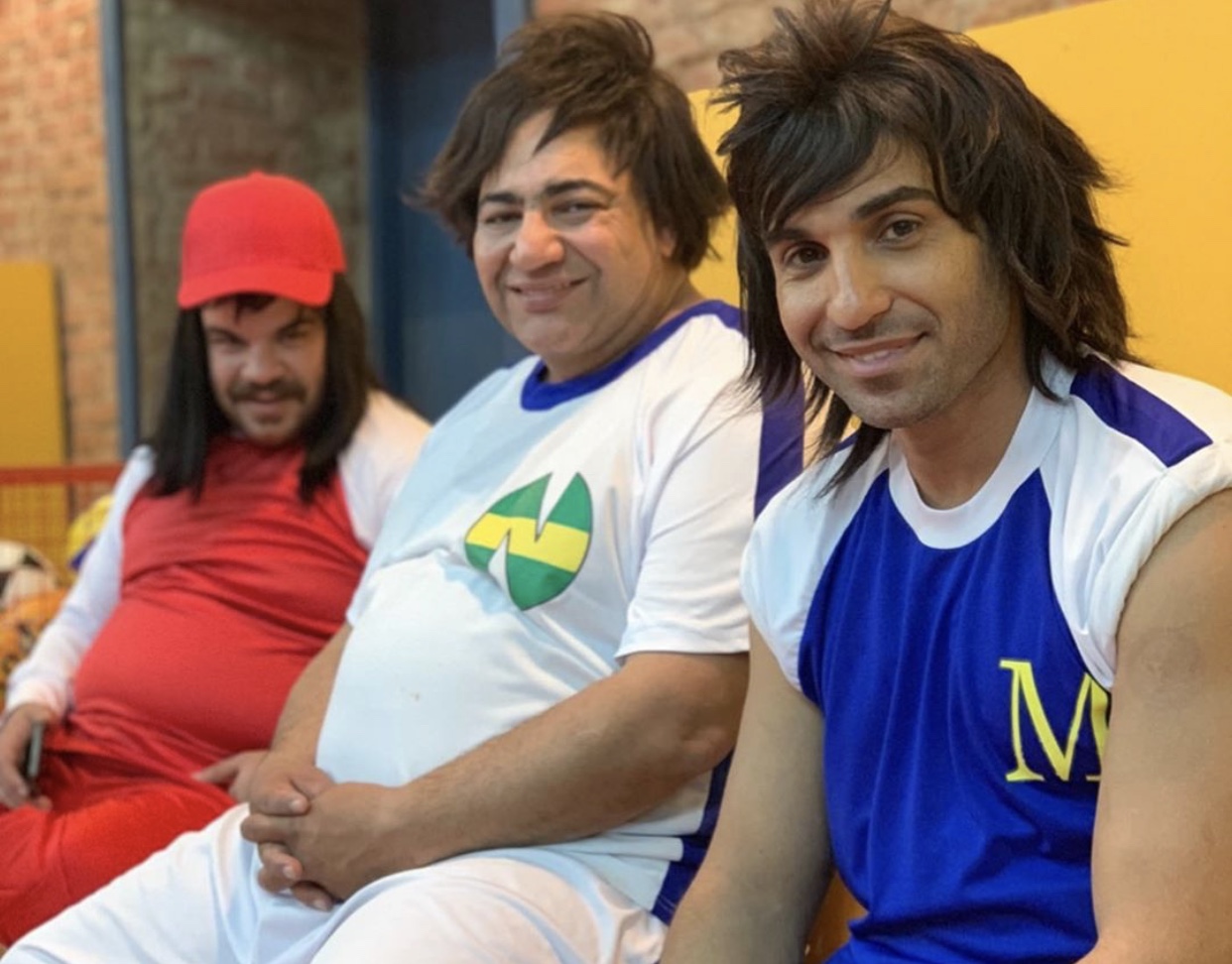 And for the episode to make more sense and be funny, the graphics were also the same as the cartoon’s.

While some people found the episode hilarious, some others didn’t see the point. One guy – specifically – expressed his opinion on Twitter; he pointed out that the graphics were horribly executed.

It’s worth mentioning that he didn’t insult the cast and crew. He might be wrong in not seeing the point behind the graphics, and that it was intended for them to be in a certain way for the plot.

Shortly after the guy tweeted this, Fahmy replied by telling him not to watch any of his work again, stressing that such content is only meant for the ‘smart’ audience. 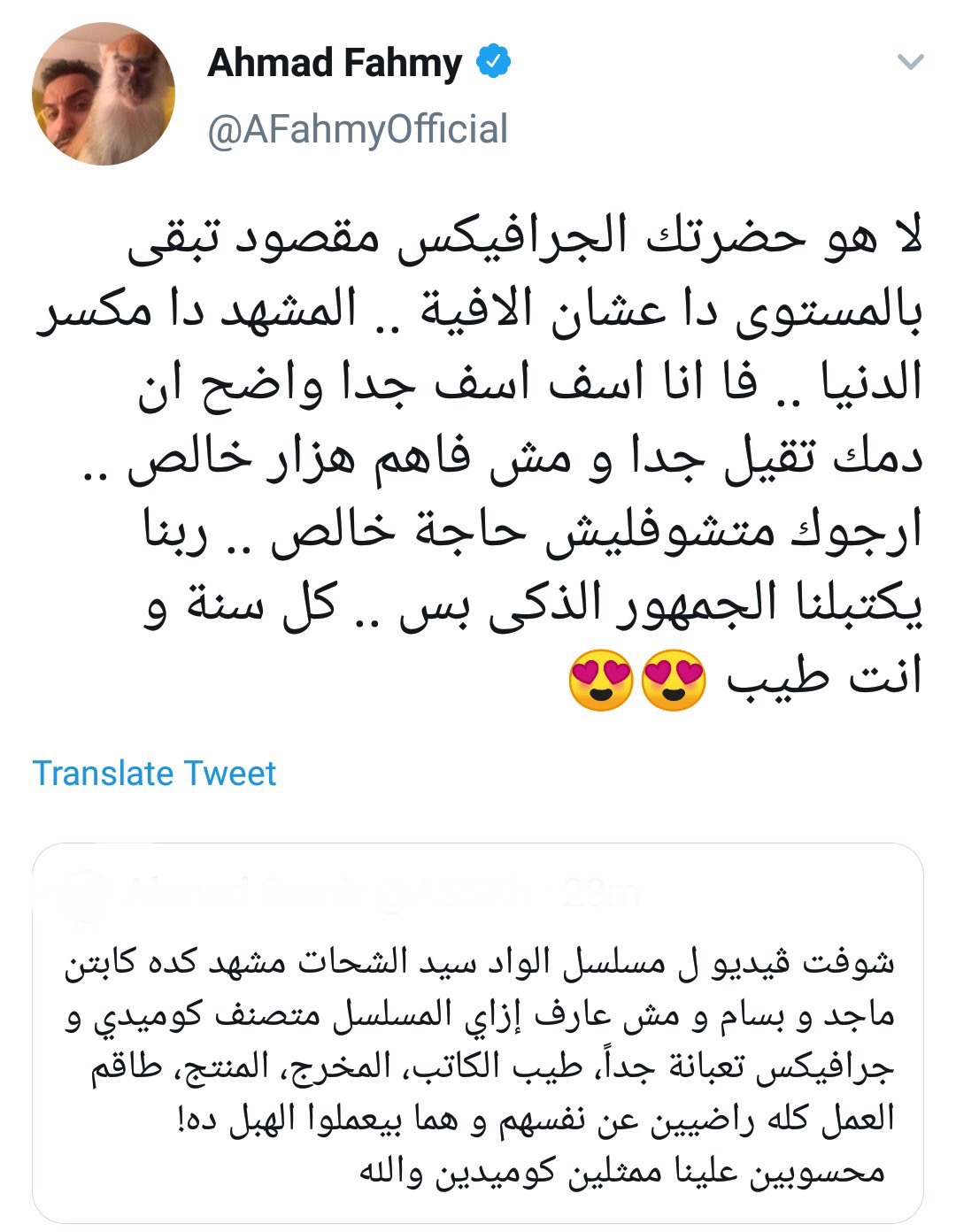 Not only this, but Fahmy also told the guy he has a bad sense of humor and doesn’t understand the jokes.

And that was the guy’s reply back to Fahmy. After which Fahmy apologized due to the extreme backlash he received almost immediately. 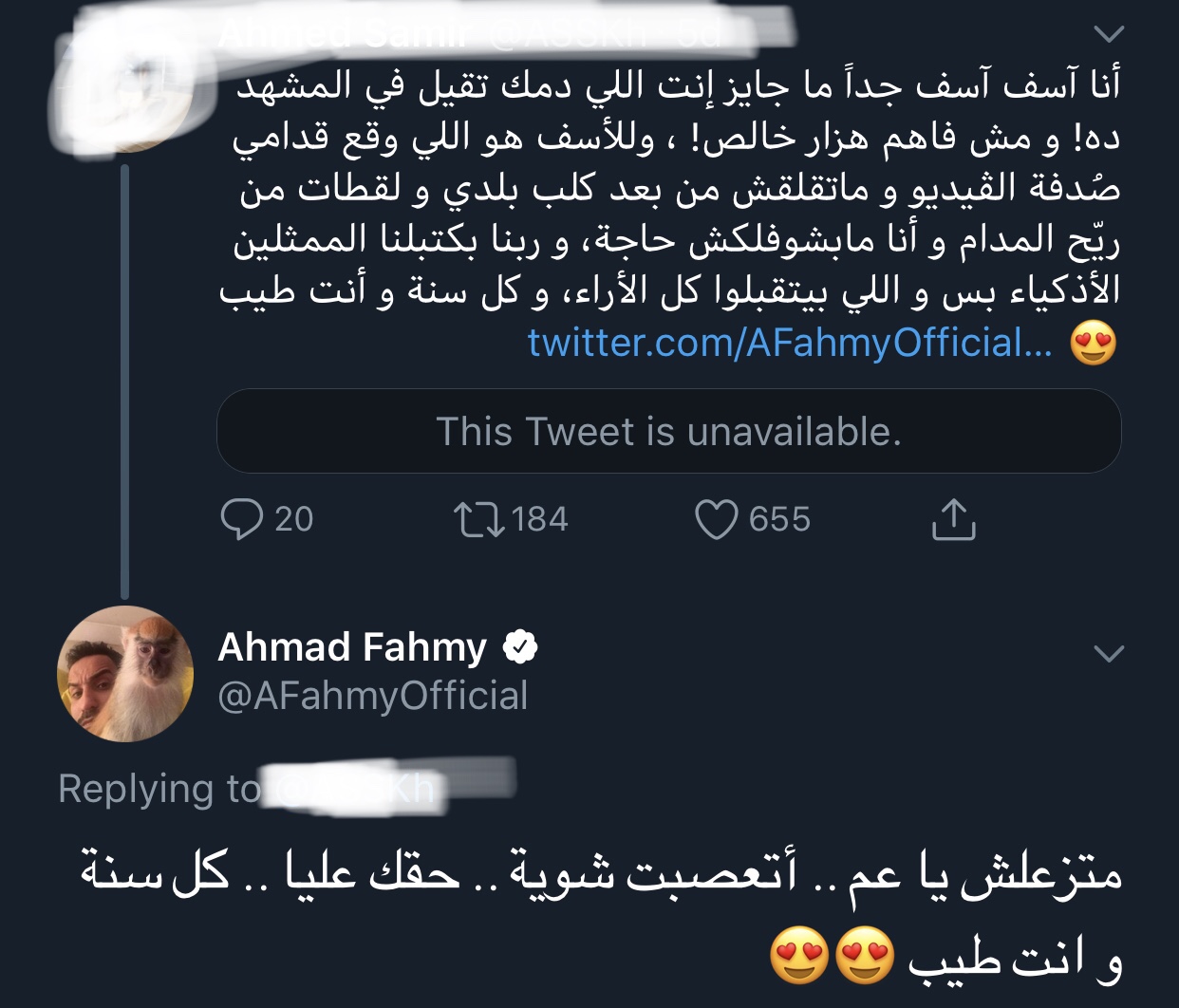 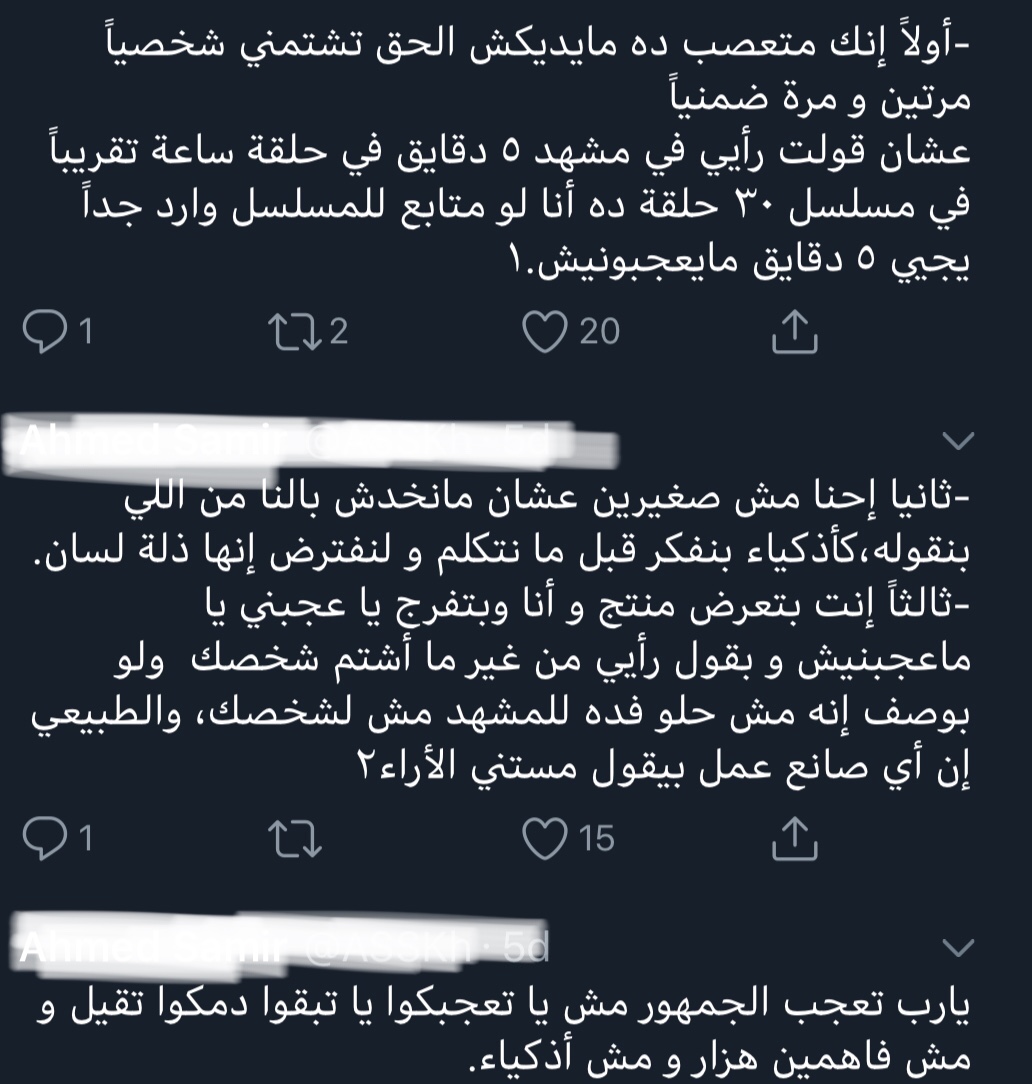 Okay, so for starters, some people may disagree and say the guy’s attitude was disrespectful in expressing his opinion. But even if that’s slightly true, aren’t actors and celebrities in general exposed to criticism, every day?

Aren’t they the ones who put out their cinema and television work and wait for the audience’s feedback? And even without asking; the basics of being a good actor or just an actor – for that matter – is listening to the critics and bettering yourself.

Honestly, in the end, the viewers are part of the reason you have a job. If no one took the time to watch an actor’s work and expressed how they feel about it, then what’s the point of it all?

Celebrities shouldn’t just work and magically expect everyone to like what they’re offering. Regardless of how good or bad it is. This is not how art is.

Reviews and feedback are important; they are what keeps the actor/performer going. Calling someone who missed the point or simply disliked your work stupid, is very disrespectful and completely misses the point.

But that’s the thing with Ahmed Fahmy, he doesn’t care what critics have to say. If you take a scroll down his Twitter right now, you’ll only find retweets and replies to those who are praising him and the series.

In fact, after the mini Twitter feud he had with the guy we spoke of, he retweeted a screenshot by an account that was started in May 2019. And the first tweets were from that same day. 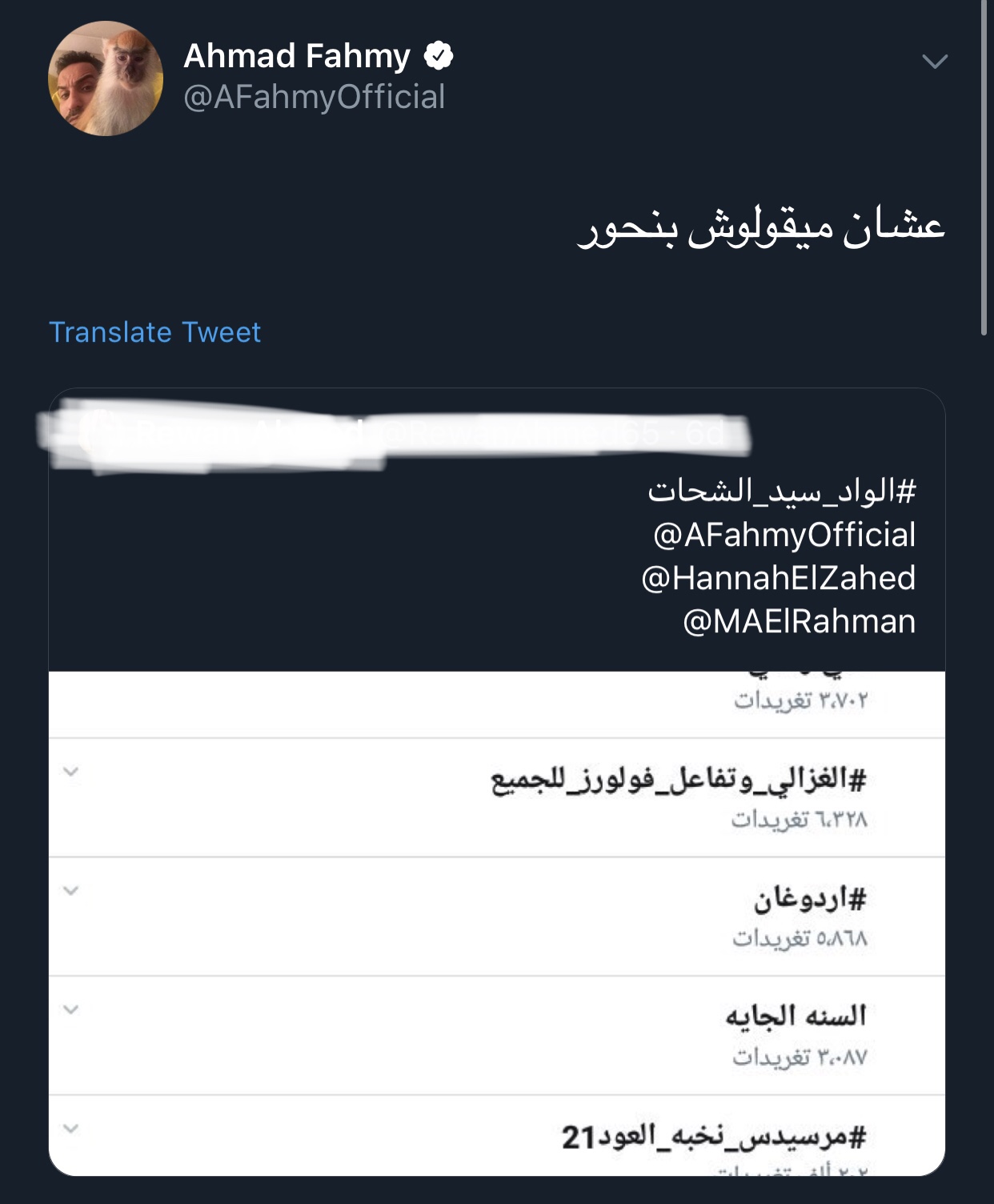 The screenshot was of the Twitter trends, showing his series’ title as one of them. And he quoted it saying “So that they don’t say we’re lying,“. Makes you think, right?

However, when someone tries to criticize anything, he either ignores or bashes them. And unfortunately, he’s actually known for that.

In an interview with El-Youm El-Sabe3, Fahmy stated that the criticism of the social media crowd and the audience in general usually shows that they either didn’t see the work they’re bashing, or they didn’t understand it. And that just does not make any sense!

Fahmy said this but at the same time, he mentioned how much he respects the fans and critics. Um, where is the truth?

Fahmy is also known for getting into online feuds especially with those who comment on his fiance, El-Zahed’s pictures on Instagram. To the point that she once highlighted that she asked him to stop.

With that being said, there’s a fine line between criticizing someone or his work, and being plain rude and disrespectful. And we’re definitely NOT saying that if anyone insults an actor, then he should let it slip or not talk back.

However, Fahmy’s case is different because he makes fun and bashes even the respectful ones for simply doing the act of criticizing.

On the other hand, back to the Twitter feud, those who were siding with the guy and saw that he was not being disrespectful to Fahmy started a series of jokes about the phrase “The content is only meant for the smart audience“. 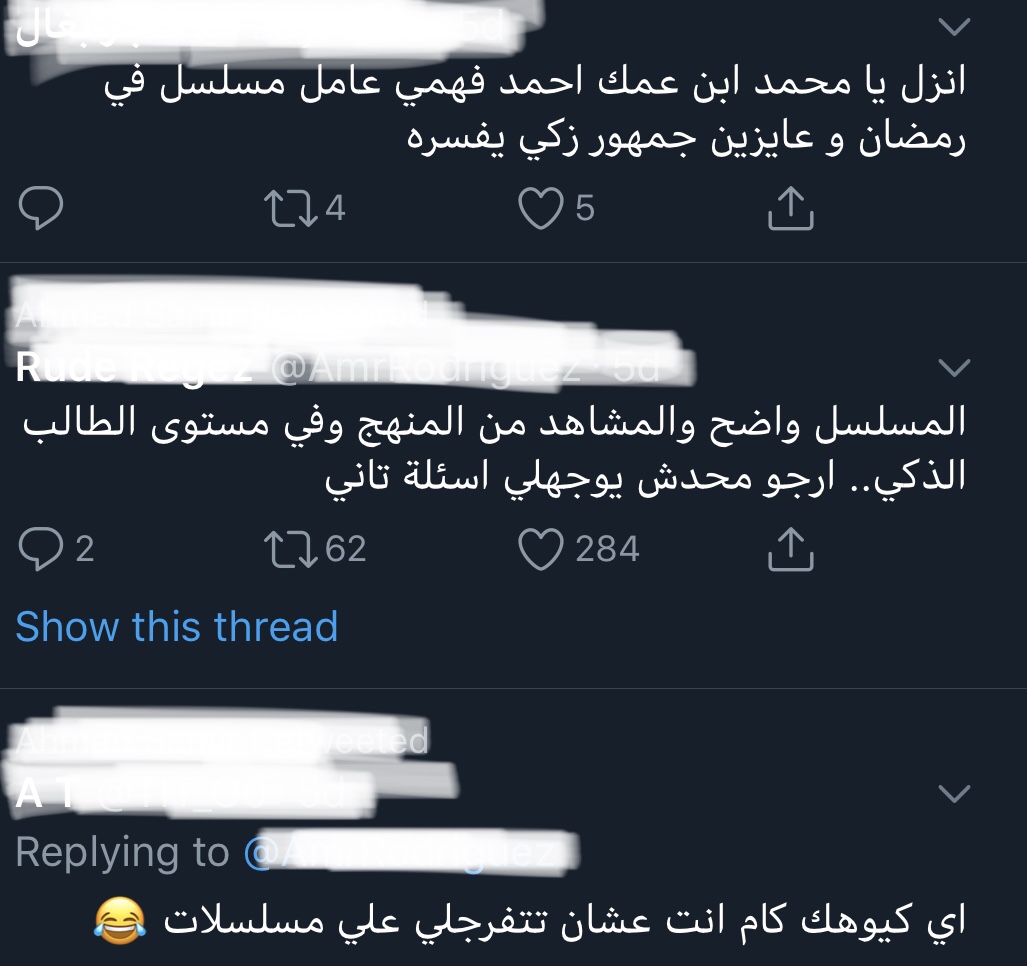 And we honestly cannot say they don’t have the right! So, tell us what you guys think; who’s at fault here, Fahmy or the audience?