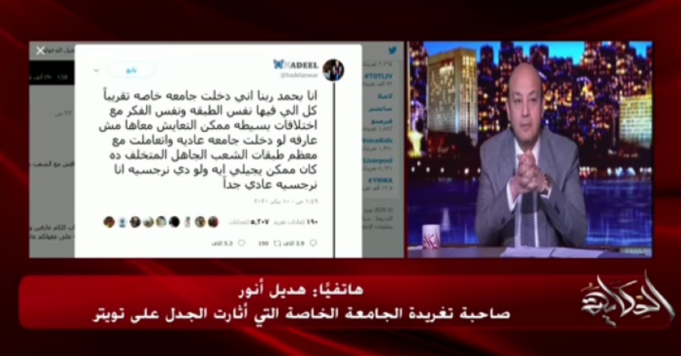 A couple of days ago, a university student with the name Hadeel Anwar made a very controversial tweet and it ended up going viral for all the wrong reasons that even Amr Adib had to speak about it.

Anwar expressed her opinion in the now-deleted tweet saying that she’s grateful she ended up attending a private university with people of the same “social background” as herself.

She went on to explain that it’s ideal that she got to be in a place with individuals who share the same mindset.

Most importantly, she highlighted that she’s grateful because “at least she doesn’t have to deal with the ‘uneducated’ and ‘uncivilized’ masses who go to Egypt’s public universities,” according to her.

Needless to say, most of those who crossed paths with this tweet were furious. Because simply, she insulted half – if not the majority – of university students in Egypt.

Even those who belong to the student body of what she thinks are safe haven-private universities were equally offended.

And the reason is that she intentionally or unintentionally directed her words at their parents, cousins, friends and anyone they know who attended public universities.

To the point that a number of them felt the need to defend their peers and took the time to tell stories about how meeting some public university graduates has changed their lives in a good way.

The whole thing escalated really quickly that Amr Adib got Anwar on the phone. And she ended up unapologetically explaining her side of the story.

Saying that by the word “class” she meant moral level, not social background. Which is hard to believe, to be honest. Because anyone who could read Arabic, could easily detect what she meant exactly.

And that’s exactly what Adib said to her, but she still stood her grounds. Nevertheless, it wasn’t long until she deleted the tweet and made another one to apologize for those who took it the ‘wrong way‘.

However, that one is also deleted now for some reason.

There’s a lot to say about this topic to be honest. But let’s begin with the fact that everyone has the full right to express their opinions. Especially if they’re doing so on their own personal Twitter accounts.

In the end, that’s what Twitter is for. However, that being said, it definitely doesn’t mean that going around insulting people and undermining their achievements, abilities, education, backgrounds and even personalities, is fine. Because it certainly isn’t!

We tried giving her the benefit of the doubt. We thought that maybe she really did base her whole point on moral levels only, as she explained.

But if that’s the case, then why did she wait for Adib to pressure her to issue an apology and make her statement clearer?

Why didn’t she notice earlier that a lot of people got offended or maybe as she’s claiming, ‘took it the wrong way’?

If we’re saying that the problem of the Egyptian society lies in the different social classes, then we know nothing about the real world. Because you could be a prestigious university graduate and your parents could own a thousand cars and a million houses, but still all of those things will never define who you are as a person.

What about you guys? Whose side are you on? Do you think Hadeel really meant something different but chose the wrong words, or is the whole thing really as offensive as everybody thinks?