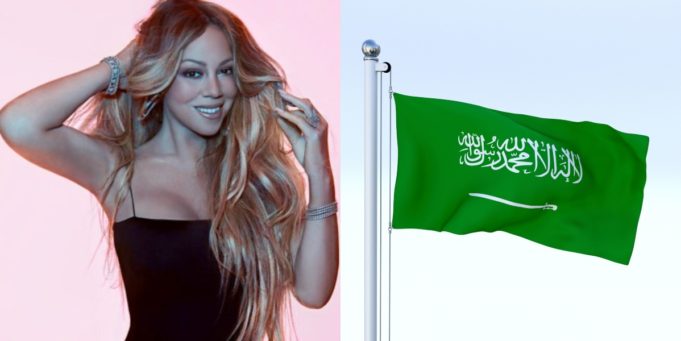 The Elusive Chanteuse Mariah Carey would be the most famous and highest-profile Western female artist to perform in Saudi Arabia since Crown Prince Mohammed Bin Salman introduced reforms and loosened his grip on the entertainment industry. But many activists are calling on Mariah Carey to cancel the performance over the kingdom’s reported human rights abuse.

What Kind Of Human Rights Abuse Has Happened In Saudi Arabia Lately?

Lately women in Saudi Arabia have gained the right to drive, the kingdom has since arrested, imprisoned and tortured the women who campaigned for women to drive.

Over the weekend, New York Times columnist Nicholas Kristof reported on the case of women’s rights activist Loujain Al-Hathloul who was arrested prior to Saudi Arabia lifting its ban on women driving in June. According to Kristof, Loujain continues to be held in a Saudi prison, likely in solitary confinement, where she also has been beaten, waterboarded and endured other forms of torture. Carey’s performance also comes in the wake of an 18-year-old Saudi woman’s high-profile quest for asylum earlier this month. Claiming her parents tried to force her into an arranged marriage. Should we still support Mariah’s decision to perform in Saudi? Is she going to step back and re-consider the situation?…We’re yet to know.

How Did Activists React To Mariah Carey’s Announcement?

Following the announcement of the scheduled Mariah performance, many activists took to social media to react to that and also ask her gently to cancel the performance and not “art-wash” Saudi crimes.

Women’s activist group CodePink called on Carey not to “artwash” Riyadh, and urged her and the other performers to cancel the show. “Doesn’t she know Saudi Arabia is one of the most repressive and murderous regimes on the planet?” the group said in a statement launching its petition to call off the concert. 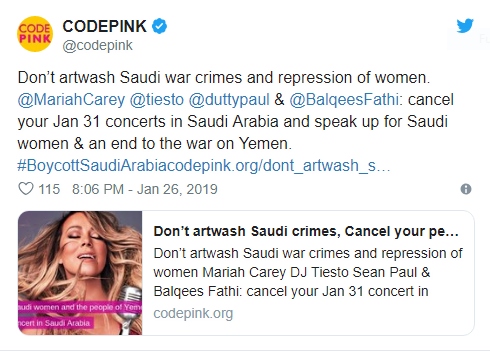 Karen Attiah, Khashoggi’s editor at the Washington Post, tweeted at Carey and the other performers asking them whether they want to be part of a performance that could serve as a PR coup for the Saudi government and divert criticism from its alleged abuses. 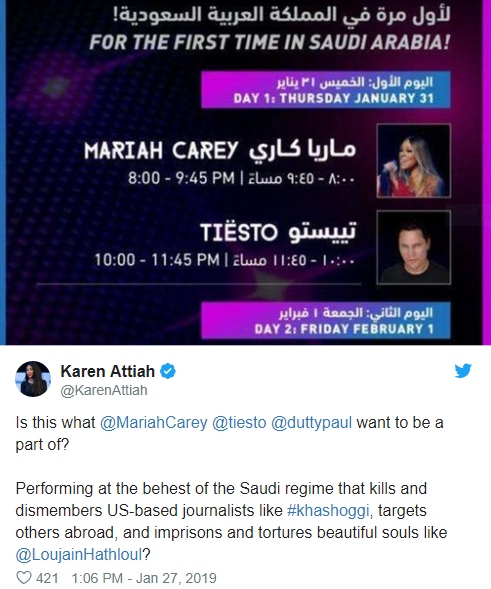 Egyptian-American journalist Mona Eltahaway was among those who called on Mariah Carey to cancel her concert, citing Kristof’s report on Hathloul’s detention. 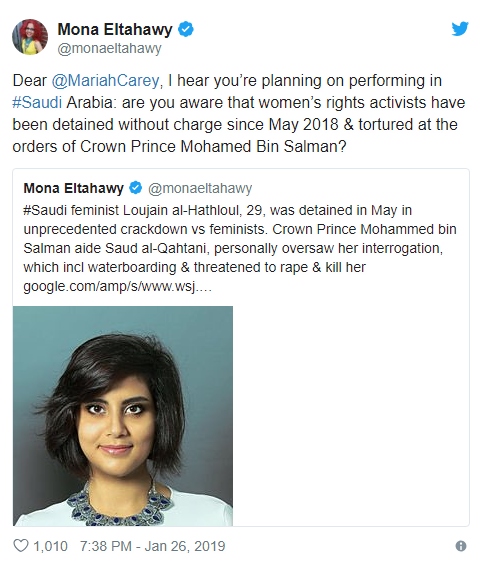 Kristof tweeted that it’s not likely that Carey will cancel her performance, but strongly urged the legend to use her international platform to call on Bin Salman to release female political prisoners like Hathloul. He also said Carey should ask to visit Hathloul and others in prison (which might be too much to ask for?) 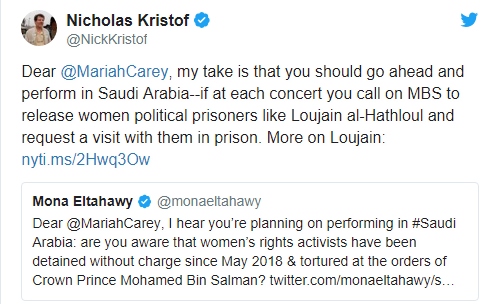 How Did Her Fans React?

Some Mariah Carey fans seem to be somehow disappointed in Mariah’s decision to STILL perform in Saudi Arabia. For example a young Saudi woman, who identifies herself as a Carey fan, said she was disappointed the singer would still perform.

We think it’s better for a legendary artist like Mariah Carey to respond to this chaos with a statement supporting the Saudi Arabia women and cancelling her show, or at least giving a convincing excuse?…maybe.

As Mariah said on the title track of her latest album ‘Caution’: “Proceed with caution”. But unfortunately she does not seem to be proceeding with caution as her Thursday concert appears to be proceeding as scheduled. Time said it had reached out to Carey’s media team for comment on the controversy but had yet to hear back. How do you think the iconic Mariah will respond to this? Do you still support her awkward silence?