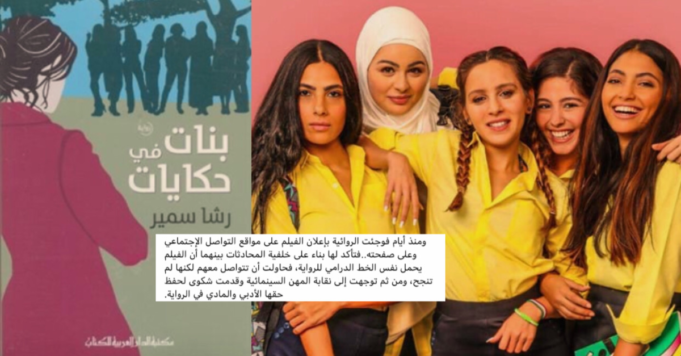 Samir is the author of an Egyptian novel titled “Banat F Hekayat“. In the post she shared, the author very clearly accuses Egyptian director Mahmoud Kamel of publicly stealing her work and turning it into a movie.

The movie, titled “Banat Thanawy“, is the one with the much anticipated release on January 7th of 2020.

Samir claims that Kamel had already gotten in touch with her several times in order to turn her novel into a motion picture. Adding that he even asked her for some edits for the script to fit the big screen.

However, not long after those edits, the director vanished, stopped contacting the author and to her surprise, the Sobky Productions teaser trailer was released and film promotions had already started.

As all of you may know by now, “Banat Thanawy” is starring May El-Gheity, Hanady Mehanna, Jamila Awad, Huda El-Mufti and Mayan El-Sayed.

According to Samir’s novel, the plot follows five high school girls who have diverse characters and lead different troubled lives. Her Facebook post confirmed that it came to her knowledge that “Banat Thanawy” holds the same exact storyline, indeed.

And since all of the author’s trials to reach out to the crew behind the movie failed for obvious reasons as she stated on Facebook, she finally resorted to submitting a complaint to the Cinema Syndicate in order to at least earn the copyrights for her own work.

Rasha Samir’s bestselling novel hit the shelves in June 2012 and after many great reviews, it’s currently on its 10th edition.

We still have no idea about the accuracy of Samir’s claims, but it’s hard to believe that intellectual property rights are still being abused like this.

Although we’re actually thankful for the existence of social media because it’s becoming a tool people could use to earn back their rights and expose imposters, we’re still wondering how in the world could anyone still deliberately do such things.

We hope the truth comes out and whoever is lying suffers the consequences…What about you guys? How do you think this will end? And are you going to see “Banat Thanawy” when it comes out? Let us know!