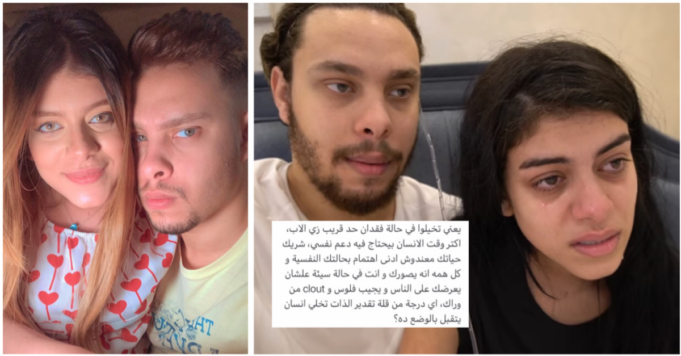 Ahmed and Zeinab strike again! It’s been a while since the YouTuber couple did something so scandalous worth warning people about. Well, this time it isn’t really scandalous, it’s only borderline insensitive and cheap!

A couple of days ago, Zeinab’s father passed away. And instead of handling it and grieving like a normal human being, her spouse decided that it’ll be cool if he took footage of her crying and looking at the camera.

The things those people do for traffic…

It’s unclear whether or not Zeinab was also on about it – since we can’t deny, she did seem sad and tearful in the video. Still, she didn’t push him away when he kept showing the cannula in her hand, explaining that she had to be hospitalized following the awful news, leading her to lose the twins she was pregnant with.

However, it’s one of two things; either he insensitively did it against her will, or they both agreed that vlogging such a personal moment is necessary for the precious views they receive and is worth the trouble. And it’s kind of looking like the latter option…

Although honestly, we don’t think there seemed to be any trouble since committing such a stupid act immediately takes away from the reality of the “grief” they were trying to portray. It’s simply called using death and sickness to get views and thereof; money. Such a cheap move.

That being said, it isn’t the first time the couple does something like that. Almost a year ago, when their baby girl was born; rather than just being normal parents enjoying the newborn, they immediately created a “Baby Model” Instagram for her and challenged people to break a record in following a baby online.

On top of that, they kept making YouTube videos of her – days after she was born – even though she looked so uncomfortable and was crying all the time.

At this point, we honestly shouldn’t be surprised because if you’re someone who thinks it’s normal to benefit from a newborn, then it isn’t a big deal when you do it with the death of one of your closest family members.

It’s true that there were some justifications to the act such as “they haven’t been posting anything for almost two weeks and wanted to explain themselves to the fans and viewers who’ve been asking“.

Well, the said explanation could’ve simply been made through a social media post or even a video of Ahmed Hassan alone explaining the situation asking people to pray for his wife’s wellbeing and her father who tragically passed away. That would’ve made the whole thing a little bit sincere.

However, they both chose to upload a YouTube video where Ahmed, instead of being a normal supportive husband, is holding his crying wife’s face and showing it to the camera for a clickbait thumbnail!

The thing is, Ahmed and Zeinab will never stop posting such content as long as there are people out there who are keen on letting them play with their minds and emotions for traffic and views. What happened to normal creative content that doesn’t feed on people’s real-life struggles?