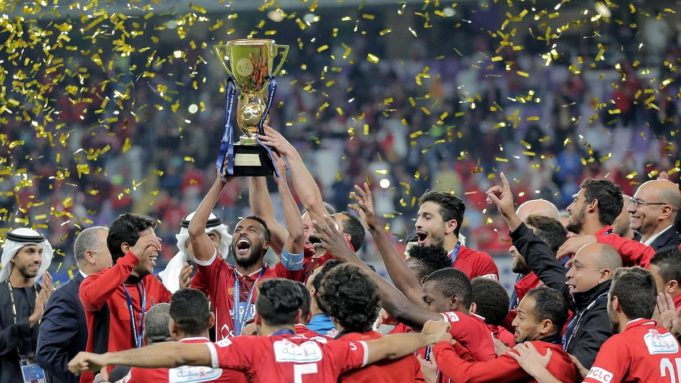 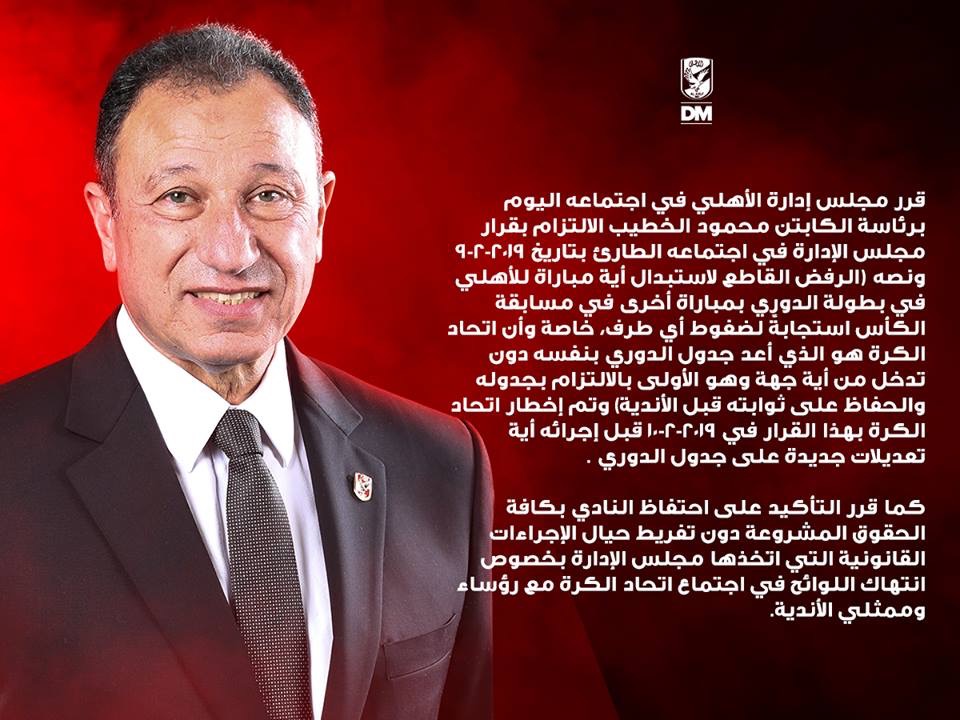 The EFA had rescheduled some of Al Ahly’s games, making them play their initial league game against Pyramids FC this coming Thursday as part of Egypt’s Cup tournament instead.

What does that mean?

According to the previous Egyptian League games schedule, Al Ahly was supposed to face Pyramids FC on February 28th as part of the Egyptian League tournament. Not anything else.

However, a couple of weeks ago, Turky Al-Sheikh, the founder and funder of Pyramids FC, released an angry statement directed at the EFA. He expressed his disbelief and complete disagreement with what was happening. 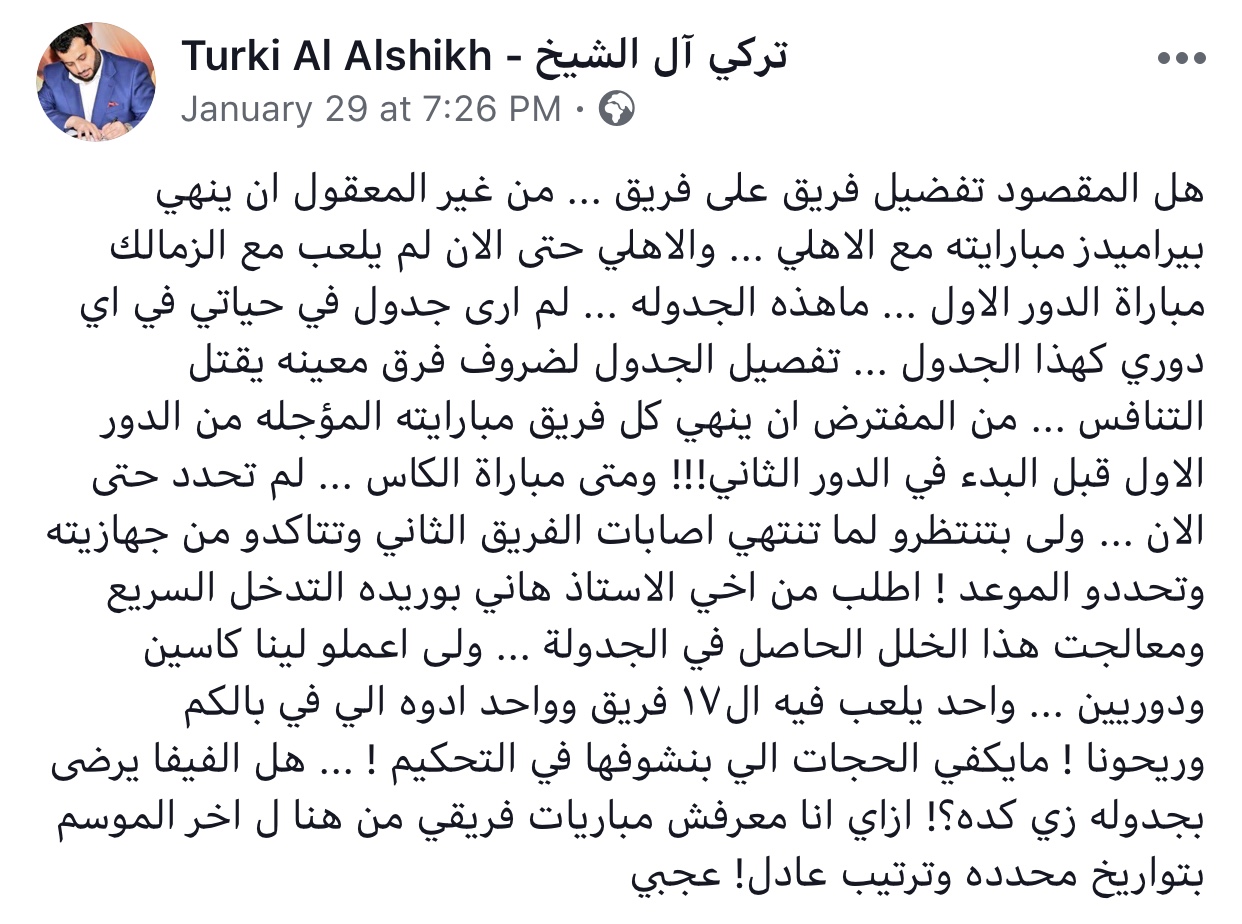 Why? Well, Al Ahly already has some postponed first-round matches, one of which is against El Zamalek.

Al-Sheikh found it unfair and illogical for Pyramids to face Al Ahly as part of the league when it still isn’t done with its postponed ones.

He also condemned the fact that the EFA is letting this happen, stating that these incidents do not and cannot occur elsewhere in the football world.

Al-Sheikh threatened that he has the right to file a report against both the EFA and Al Ahly to the CAF as well as FIFA, in addition to his right to refrain from playing Al Ahly in the league until it’s done with its postponed matches.

It was not long until the EFA have accepted Al Sheikh’s threatening requests and amended the league’s schedule, where Al Ahly vs Pyramids match is to be played on April 18th instead of February 28th. 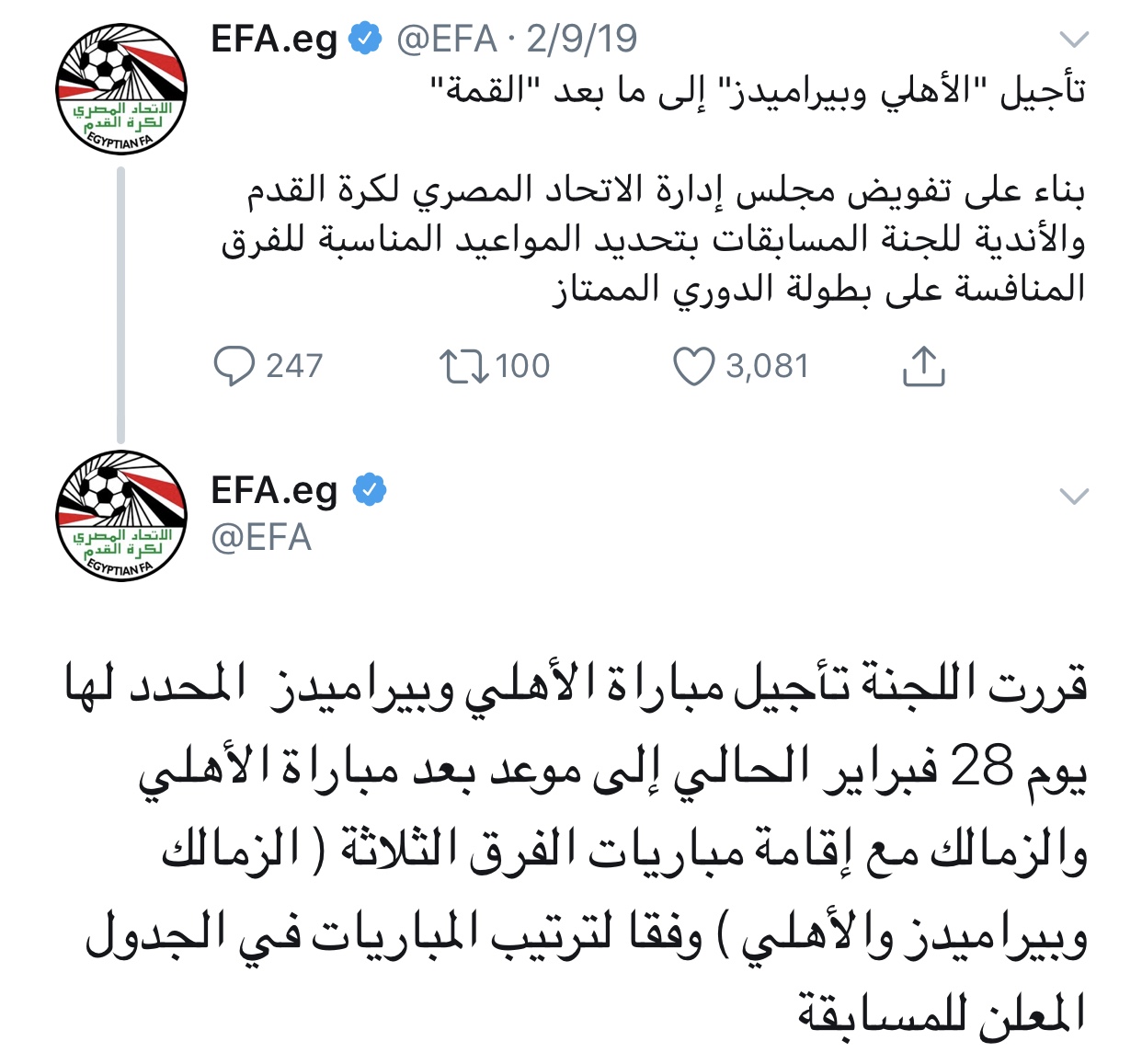 Which, again, means that they will still face each other on the previously announced date; but as part of Egypt’s Cup tournament.

In a related context, Pyramids FC also released a statement ‘supporting’ the EFA with the amendments decision – which is what they had asked for from the beginning – 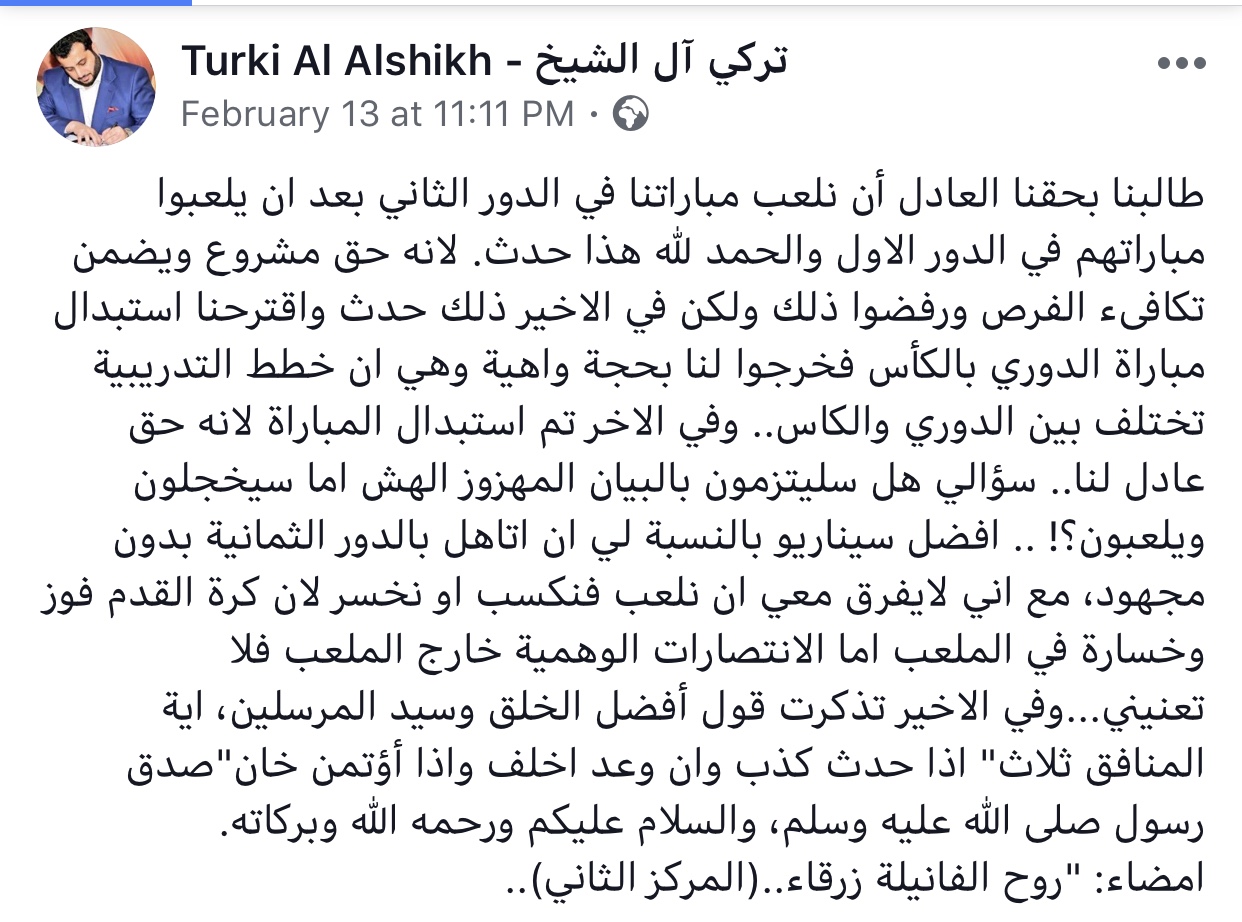 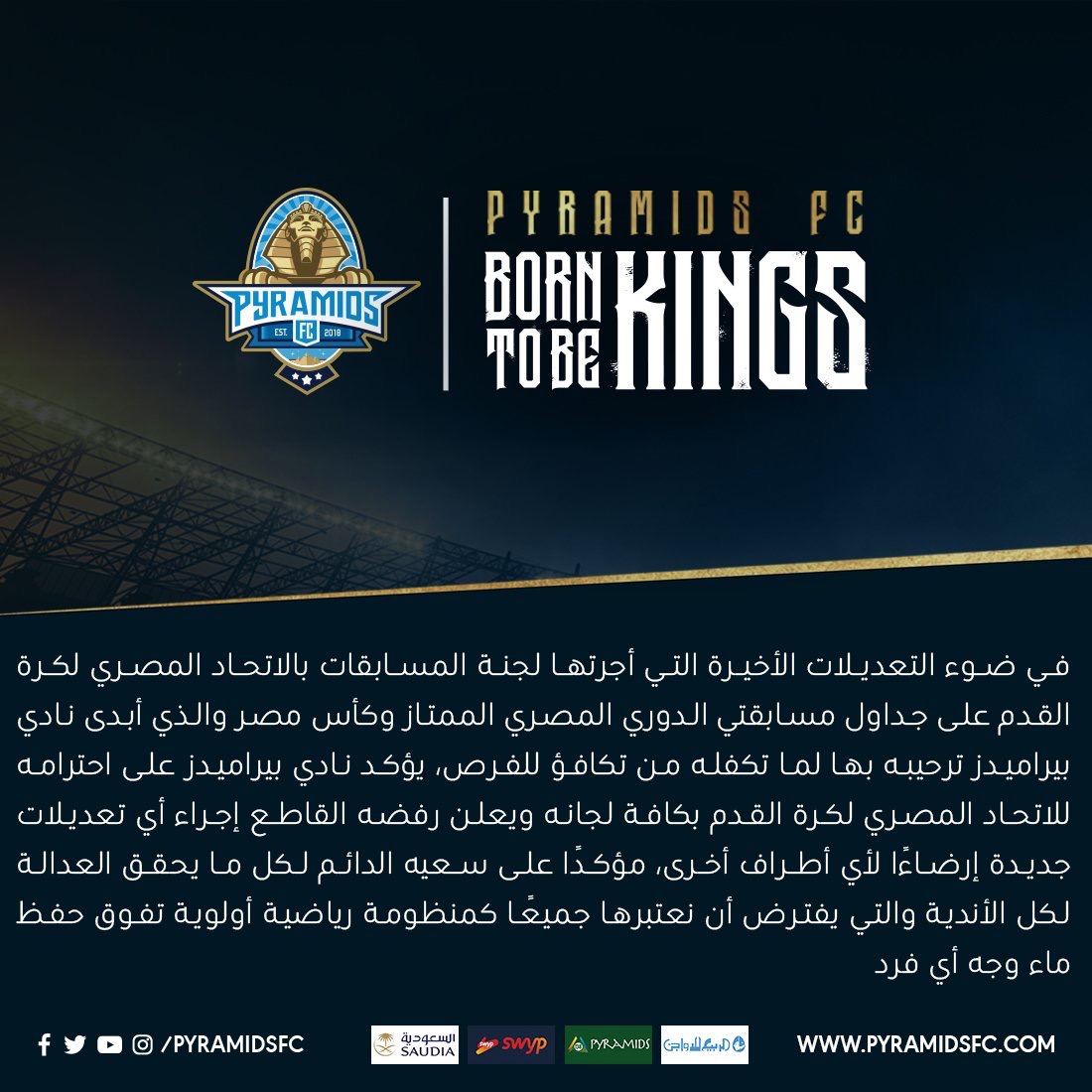 The plot thickened as Al Ahly angrily responded with their absolute refusal of such amendments, asserting that they’re not letting go of any of their legal rights.

Official EFA sources have told FilGoal that they will be taking the recent Al Ahly statement as an official withdrawal from Egypt’s Cup Tournament. This – in itself – is also considered a violation that places Al Ahly’s future in the rest of the tournaments organized by the EFA in danger.

The EFA also confirmed that no further amendments will be made to the league schedule, no matter what.

It’s worth mentioning that the three top rivals are currently battling for the title, with El Zamalek at the top of the table with 52 points, and Pyramids and Al Ahly in second and third places both with 45 points – that’s of course minus Al Ahly’s postponed matches –

What do you guys take out of this mess? Is Al Ahly officially out of Egypt’s Cup? Should the EFA’s decision be considered as a threat? What will happen to Al Ahly’s future in the Egyptian League? Especially with their Pyramids FC game being played in April – against their wishes-? Also, what are the legal rights that will enable Al Ahly to stand against this – as they mentioned-?

Most importantly, when will they ACTUALLY play football instead of focusing on the meaningless feuds?