Identity Magazine
Home Trending Amr Diab Just Proved What It Means To Be Passionate About Something...
Facebook
Twitter
Google+ 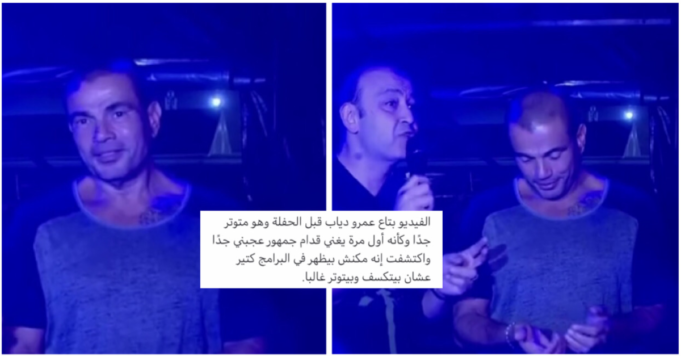 On Thursday November 7, Egyptian TV host Amr Adib gave people the chance to get up close and personal with Egyptian megastar Amr Diab behind the scenes of his concert in Riyadh, Saudi Arabia.

As far as we remember and know, Amr Diab has never conducted a backstage interview; let alone a recent one where he openly talks about his huge success over the years.

Diab’s almost non existent media and social appearances have also kind of given people the wrong idea about him for the past years.

Like, for example, how he just doesn’t care, does what he likes, only works to maintain a certain reputation/image for himself, and is a ‘too’ confident man with a big name – maybe even full of himself.

Another theory was that he doesn’t even know how to publicly speak unless he’s talking to the crowd in a concert.

However, we were all proven wrong when we saw a whole unexpected other side of Amr Diab in the said recent interview.

Diab was too nervous and unsure of himself. And during his backstage interview with Adib, he admitted that he never likes to look at the crowd before he goes on stage. And that this interview kind of forced him to look at them, which explained why he was so shaky.

He was not even certain that people knew the words to his new hits and was skeptical about whether or not they’re going to like them.

Because we could all create big names for ourselves and keep breaking records, but not all of us could stay the same after doing all of that.

In Diab’s case, he’s been doing this for over 30 years now; and you’d think that with the huge fanbase he has created, he’d always have blind faith in them loving everything he has to offer with no doubts.

That being said, it looked like he was still a rising star seeking validation.

Which, again, tells us so much about how you can never be so sure of yourself and how you always have to question everything you do away from the spotlights – even if you’ve already reached the top – just to maintain your place and never let people down; and that’s exactly what he’s doing.

So what do you guys think? After looking into Amr Diab’s recent head-turning interview, did you get the same vibe we did? And do you think this is really the secret behind his success?