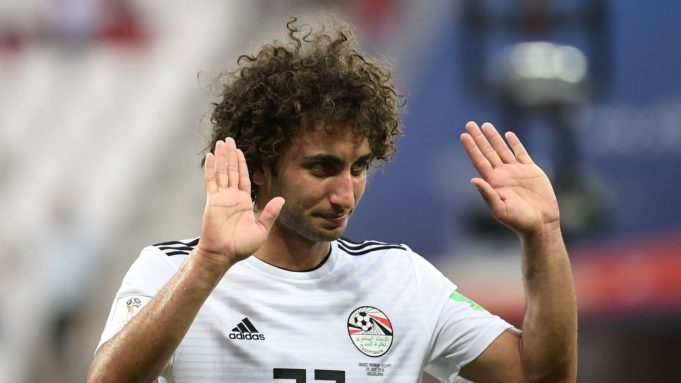 According to Filgoal.com, The Egyptian Football Association, Amr Warda has been officially excluded from the Egyptian National Team. We are happy with the decision and hope the incident becomes a lesson and to be remembered in his history.

In case you’ve been living under a rock, you probably by now know about the social media controversy against Amr Warda. Warda has been called out by British Egyptian model, Merhan Keller, for allegedly sending her unsolicited social media messages.

While Warda’s message might’ve sounded tame, and quite honestly silly, there are many reasons why it’s problematic.

Since then, many women came out with their stories against Warda, and others retold their stories which they have shared months, and years, ago.

The topic quickly turned into a meme, making him the laughing stock of the Egyptian social media, but the real issue seems to be undiscussed.

The real issue is that we all ‘hear or seem to know‘ Amr Warda is an alleged sexual predator, but we had to wait for something that can be turned into a meme to talk about it.

The worst part is that the main issue was overlooked, and replaced with shaming the accusers

The majority of people have ignored the main issue, and focused on Keller, the woman who sent the claims, and started to attack her and question her intentions.

While we don’t know Keller personally, and would never know her true intentions, this does not change the fact that Warda allegedly sent her unsolicited messages, as well as encouraging other team members to do the same. Because realistically, there is no way 4 of the team members sent her messages around the same time by coincidence.

With that being said, Warda still keeps representing Egypt in the national team and even remains hired by some companies to promote them, all while being an alleged sexual predator.

Amidst the #metoo movement, and how we’ve witnessed many Hollywood actors, businessmen, and even politicians have their careers destroyed after their harassment accusations, it is important to talk about Warda.

While of course, we would never want to have someone’s career destroyed without actual proof, we still need to pay close attention to someone who’s been facing all these accusations.

As for those ad campaigns, he should have not been hired for them to begin with, since Warda’s reputation has always been questionable.

Going through Warda’s history, there have been some very questionable incidents which we seem to brush off. While the incidents were different, they were all consistent, which makes the allegations more uncomfortable.

The first incident that made us notice Warda’s allegations was the biggest incident, and it happened 2 years ago.

Warda was bluntly accused of sexual harassment by his former team

Warda has been charged with sexual harassment during his contract with the Portuguese club Feirense in August 2017, the thing which led to the expiration of his contract. Warda did not just sexually harass women, he was low enough to harass two of his teammates’ wives.

Of course, Warda denied the claims on his twitter account, but he was still let go from the team, and we all know there is no way this would’ve happened unless there was solid evidence and not just a mere misunderstanding.

While this should be enough to have someone’s career destroyed, this did not affect him in the slightest.

After his incident in Portugal, Warda was, again, in hot water because of sexual harassment claims.

Several women shared their conversations with Warda to confirm that he is, in fact, a harasser after he denied his claims.

Shortly afterward, Warda was excluded from the National team during the World Cup qualifications in the Egypt vs Uganda match. Egyptian National Team director Ehab Lehita claimed the reason  Warda was excluded is “technical”, but no feather details on the technicalities were explained.

Warda is claimed to have been targeting younger women on social media, which is also problematic

During the social media call-out caused by Keller, many women came forward with their experience with Warda. Even before that, numerous women, mostly younger ones between the ages of 18 to 23, some even younger, have been claiming and sharing screenshots of Warda interacting with them on their Instagram accounts.

Warda’s interactions have always been seemingly friendly, but with obvious hidden intentions.

His messages have always been consistently asking the women to visit him in Greece or to hang out with him when he’s in Egypt.

Another one of Warda’s victims was a 21-year-old girl called “Meer” on Instagram (@meernakl), who shared their messages exchange along with voice notes from him.

While some might claim the pictures are fake, and women make up the stories, Warda’s accusations have always been consistent, making it hard to believe they are made up.

The problem with this issue, however, is the fact that many people think Warda is not at fault for interacting with these women. Again, young women.

We do want to point out the reasons why it is, in itself, problematic.

Warda allegedly targets young girls because he knows it’s easier to get them star-struck.

Let’s be realistic, when you’re a young woman who’s getting attention from someone famous, there is a very high chance of getting star-stuck and being happy to get this attention.

While that might have not been the case with Keller, it was the case with many other women who shared their stories, not just after Keller shared hers, but before that as well. Which leads to our next point.

Before Keller’s story, several other women shared their stories, but they all went unnoticed. We had to wait for someone with a big social media presence to finally listen.

From personal experience, I have known several women who claimed to have had negative experiences with this man. Some were “harmless” social media messages, while others were major.

Lucky for Warda, harassment is one of those things which are hard to prove, and we can’t exploit him for the bigger cases. With that said, social media screenshots have been shared for years.

Social media groups like Miss Basket and Her Diary have had several posts of women sharing stories about Warda, and they were all more or less the same; sleazy messages asking to meet with the girls.

Yet Warda STILL represents Egypt in its national football team without an official stand against his actions. Not just that, but Warda is still hired by numerous brands to advertise for them, giving him more attention, and giving him a pat on the back for being an alleged harasser.

To be honest, I am not a fan of football, nor do I claim to know how important Warda is for our national team. But I do know that harassers must be held accountable for their actions, and I am  100% sure brands can survive without hiring him to advertise for them. More importantly, we should not be okay with having an alleged harasser represent us, with no one questioning what he’s done. 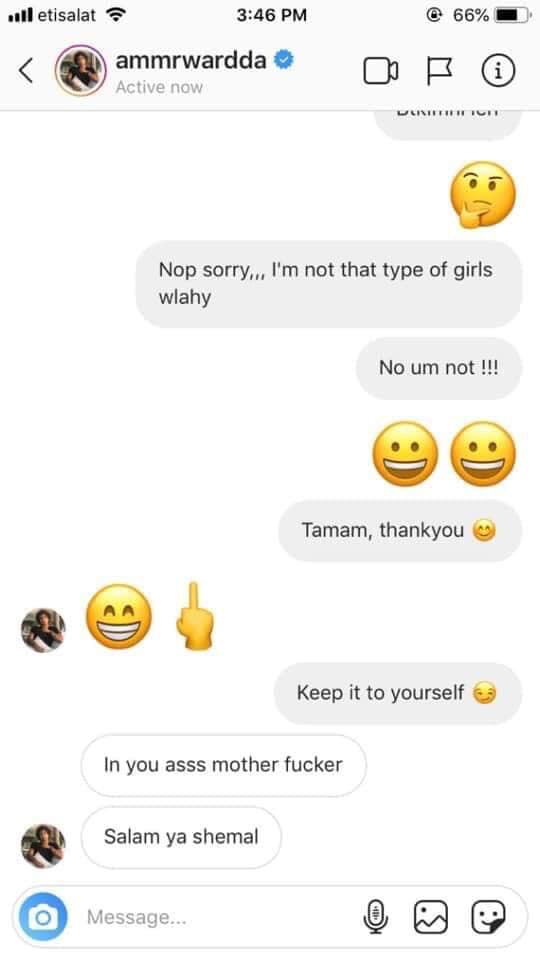 With the recent accusations, I really hope issues like these to be taken more seriously. We know that a meeting was held to discuss the issue, which is a good step.

What we do hope is having the brands that deal with him take a strong stand by cutting ties with him.

Warda needs to be an example that fame will not give people the right to do what they want.

Warda needs to be the face of every harasser.

Warda needs to show that harassers will be held accountable.

Warda needs to be canceled.

Warda should not represent Egypt in any way, shape, or form.