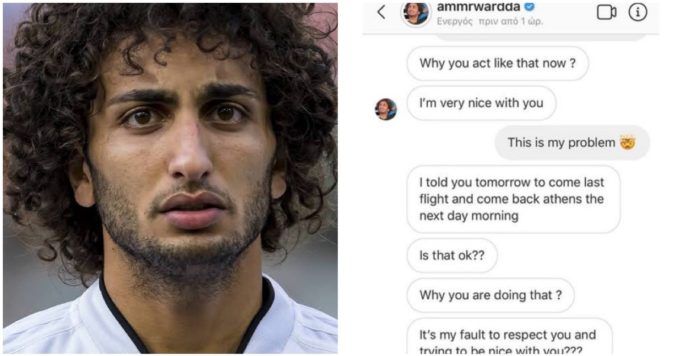 In yet another harassment scandal, Amr Warda was very recently outed by a Greek journalist for trying to get her to “spend the night” with him. Typical!

If the whole thing is really accurate, then it seems like Warda is never going to stop harassing women and threatening them into flirting back and going with the disgusting flow he had so blatantly set.

This time may be a little less heavy than the weight of his previous online sexual harassment cases, but if the new scandal proves one thing – it’s definitely that he’s yet to learn from his past mistakes.

That’s, of course, if he even considers them mistakes to begin with. Because it seems that he’s so keen on living his life as the harasser footballer and not even caring about how this is the worst thing he could ever be.

Demi Stamatelia, the Greek journalist, and Warda’s latest victim shared a bunch of screenshots to her now-deactivated Instagram account, that show Warda offering her a ticket to fly to Thessaloniki and spend the night with him.

According to a Greek news outlet onsports.gr – in addition to several other sources, Stamatelia decided to make a scandal out of the whole thing and publicly share the conversation when he basically didn’t want to take no for an answer. Again, typical Warda!

It’s also worth mentioning that he allegedly, according to several sources, decided to slide into her dms after spotting her at a store near the hotel he was staying in, and kept asking around about her name and number. And he could easily reach her because she’s a known sports and football journalist.

That being said, let us make one thing clear. Sliding into someone’s dms, asking around about them, and trying to flirt is not a crime until it turns into harassment and absolute disrespect once rejection makes an appearance. And that’s what Warda is all about!

Actually, with him, it’s never even about flirting with someone. It’s about forcefully involving them in sexual activities whether virtual or else. And the worst of all, not taking no for an answer no matter what.

Honestly, the news definitely didn’t come as a surprise to us considering what happened in 2019.

Especially that looking at the very recent screenshots shared by Stamatelia, he is still using the same exact rhetoric!

“Why you act like that now? I’m very nice with you.”
“It’s my fault to respect you and trying to be nice with you?”

Unbelievable! As if he has any power to do anything or cause them any harm as his threats usually entail. And as if respect shouldn’t be on the table from the beginning!

We honestly have no idea where he gets the overconfidence, like, what would’ve happened then if his reputation didn’t precede him as it does now?

But you know what? Truth is we’re not surprised, however, not because it was obvious that he wouldn’t change or quit his disgusting acts. Actually, the reason why Warda being the star of another harassment story a year after his last one shouldn’t be a surprise to anyone is because in 2019, he was only sorry he got caught.

Therefore, there was no room for guilt or improvement. He never really owned up to what he had done. Mainly because he was never treated as a harasser, instead, he was treated as the victim who was subjected to a “harsh internet backlash”, really?

Remember when the National Team Players were the reason he was only suspended for one match and after they talked to the EFA, he officially rejoined the team? What a shame!

Moral of the story: If you’re a sexual harassment apologist, then you should take full responsibility every time the harasser you defended gets caught in the act again.

Amr Warda should’ve been suspended from the National Team, most importantly, he should’ve gotten admitted into a rehabilitation center when all the videos, voice notes, and screenshots were released last year – proving that he really has an issue and nobody wants to admit, not even his own family.

Maybe then it would’ve been a lesson learned for him, a victory for his online sexual harassment victims, and an example to every harasser. But no, unfortunately, as you can see, what happened is the complete opposite!