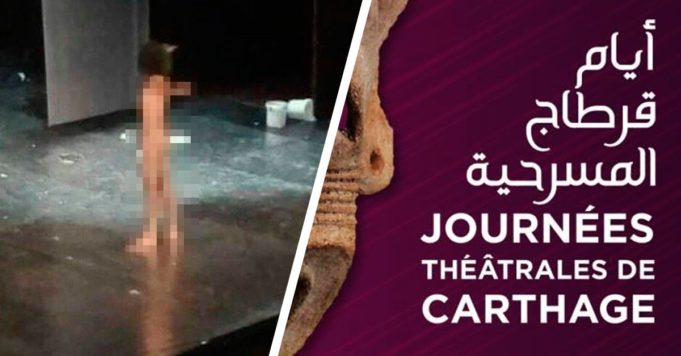 A theater performer stripped naked during a live theater performance in Tunisia. The incident caused great shock among the attendees; some of which were families. Most of the audience decided to leave the theater.

The play, Ya Kabeer, which was performed on December 10th, was part of the 20th Carthage Festival taking place in Tunisia.  The Syrian actor, Hussain Marii, performed the nude scene for 20 minutes.

Zouhair Rayes, a Syrian actor and the manager of the Municipal Theater, said that though he was surprised by the performance, he didn’t think that there was anything sexually provocative in it.

Yet he added that while nude performances are okay and acceptable in Western venues—though not common, it’s still unacceptable in Arabian and Middle Eastern theater.

The actor explained that he wanted to express the violation of human rights in the Arab World.

The Festival’s authority denounced that act altogether, stating that the actor was improvising. This is strange since no one did anything to stop it for 20 whole minutes, the duration of the nude scene!

Seriously, what’s with people and nudity nowadays?! If it didn’t serve a case, then it didn’t raise awareness. Yes, freedom of actions and speech are understandable. However, the act was offensive to our culture and did not represent anything; it wasn’t necessary.
Especially if we consider the fact that it wasn’t in the play’s main script, and wasn’t really crucial to the performance. Clearly, the actor just wanted to shock the audience.
The actor may have needed some room to release his creative skills, but he surely didn’t need to let it go this far!

Does nudity belong in artistic performances? Did the actor have the right to do what he did? Let us know what you think.