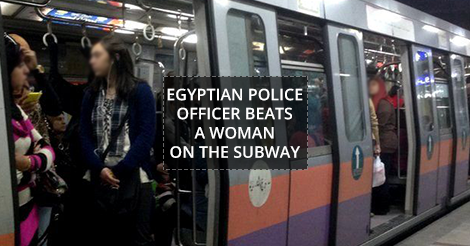 Two days ago, a police officer barged in on the ladies’ only subway passenger car which, as the name suggests, should be exclusive to ladies.

According to sources, he tried sexually harassing one of the ladies who turned around to slap him on the face. In this video, a woman is heard defending herself saying “I swear I didn’t hit him”. The police officer threatens her after the conversation escalates and he orders her to leave the carriage. He ends up hitting her.

Abusing one’s power is nothing new in Egypt, but it’s becoming unbearable how we see women’s basic rights being violated and the stigma is just too much that some women fear speaking up. Luckily though, most people seem to be supportive and this can be seen through the comments on the video that has gone viral and reached around 1.8 million views. However, some people are doubtful of the fact that he tried to sexually harass her.