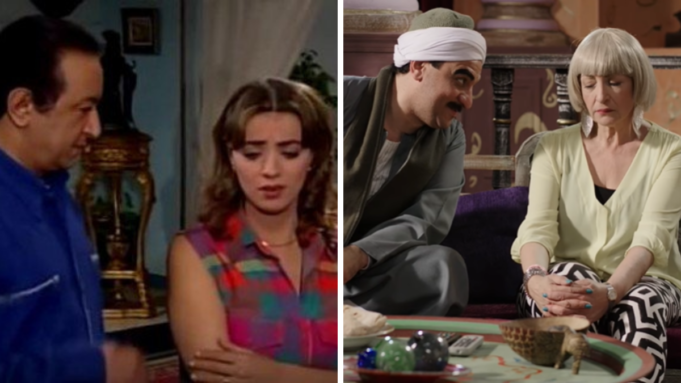 Reading the title of this article, you probably took one deep sigh and thought “here they are, these writers, just going about and making mountains out of molehills“. And, okay, so maybe the concept itself seems a bit exaggerated but come on!

Everyone who has had a TV set in Egypt knows that there are about 6 fictional relationships that weren’t irreversibly horrifying. But here’s the good news:

While every other fictional relationship basically sucks, there are about 5 that are really, incredibly suspicious…and, yes, these are the ones we’ll be analyzing today! Read up!

We have a lot of thoughts on El-Hag Metwally, okay? He’s just not a good person. When he fails to marry his son’s girlfriend (ew), he goes out of his way to marry her friend.

That’s basically a very poorly-handled midlife crisis that sadly involved women who are old enough to be his daughters. But at least Olfat got a Sugar Daddy out of it.

Dr. Hassan and Sarah from Sarah

Yes, we went there. Look, he is her doctor and getting involved with patients in this context is just disturbing. You do know Sarah, up until the show is almost over, is basically at the development level of a child, right?

Some feelings should just be left un-acted on because this was just…too much.

At this point you want to tell us that we’re overdoing it. But honestly, are we? Let’s take a deeper look into this relationship. On the surface, it’s the typical boy-meets-girl story. But, really, it’s a boy-marries-his-stepsister story.

See how creepy it is? Imagine if things went differently and they were raised in the same home? The level of ickiness is skyrocketing by the minute!

Faza3 and Samantha from El-Kebeer Awi

No, this relationship isn’t in here because of the age difference. That’s actually the least of our concerns. Have you ever considered what’s actually going on between Faza3 and Samantha and how it’s perceived over there?

He literally married his boss’s daughter. Sure, you can call it a “power move” or whatever but imagine the working dynamic!

We’d like to start off with the fact that, even without the show plot-lines and special circumstances, this relationship is just so weird, it’s suspicious on that account alone. Sure, you can say it was the 90’s, but do the 90’s really excuse whatever this is:

The answer is no, in case you were seriously contemplating this. And here’s another suspicious thing that we really can’t let slide — she is his teacher.

Who thought any of these were okay?