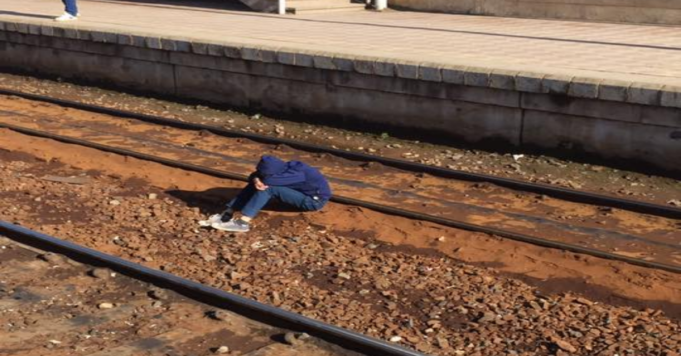 If you still think your friend’s depression or your brother’s suicidal jokes are “just a phase”, think again! A child almost killed himself yesterday sitting on a train track!

It is happening, AGAIN!

Yesterday, a Facebook post started going viral on all of our feeds. The post contained a picture of what appears to be a young teenage boy sitting on a train track with his head between his knees.

The publisher of the post “Tamer Abdo Amin” tells the story of this young boy he saw who seems to be about 12 years old, sitting on the train tracks in a train station in Abo Keer, Alexandria.

In the post, he goes on describing how this boy stayed on the tracks for over 15 minutes, and people passing by didn’t seem too concerned about it.

When the train signal starting going off indicating that the train was coming, Tamer started to panic and scream at the boy to get up. However, the young boy on the tracks completely ignored his screams and stayed in place.

People were still not doing anything!

By then the train had started to pull in the station so Tamer and another guy jumped down the pavement and pulled the boy up although he was resisting them and screaming!

After being pulled up, the boy was naturally shaken up for quite some time and the fact that now people were crowding him did not help.

After some time, the boy started talking and confirmed that he, in fact, wanted to kill himself. Why? Because he was bullied at school about the way his teeth looked.

In case you were still wondering if bullying can kill, yes, it can!

Thankfully, Tamer stayed with the boy and took him home and met with his parents who, according to him, were extremely nice and supportive, his father is even a psychiatrist!

Before you accuse the parents of any negligence, the boy was not open about the bullying he is going through, therefore, they didn’t know he needed their help!

No more information has been revealed about the boy and we hope it stays this way. Thankfully, he was saved and now we are all praying for him and his family to be able to put this awful experience behind them and hopefully start getting better.

But what about all the other ‘secretly suicidals’ out there?

He is not the first one!

This last year alone, suicide has been no less than an epidemic in Egypt! This young boy trying to kill himself on the train tracks is not the first one to think this way, only instead of a train track, some used subway tracks.

In fact, last year, suicide attempts on subway tracks were so many that the subway officials commented on it!

We wish it was to try to help them, but it was only to ask to stop “using the subway” for suicide because “it disturbs the citizens’ daily business”.

Because that’s what matters, right?

This boy is also not the first to attempt suicide because of bullying. Several suicide cases in the past few months alone have been reported due to the same exact reason. That’s other than the several bullying incidents which occurred in schools, streets, and homes also last year, and we got to know about them also from social media, like Basmala’s story. Which is one of the very few with a happy ending!

It is also not the first suicide story to go viral and have people talking about it all over social media. We all remember the story of Ibrahim Nasra, the psychiatrist who killed himself after struggling with depression.

Will he be the last?

After each and every suicide case or attempt, people write posts, we write articles, and the wave of awareness-like words takes our feeds by a storm. “Mental illness can kill”, “Suicide is real”, “We never knew they were in this much pain”, “Bullying is not okay”, and so on and so forth!

We go back to our day-to-day lives and NOTHING changes! Yes, mental illness is an illness, yes suicide is real, and it is here, now!

It is taking people away from us on daily basis and something needs to change. Allow me to quote a previous article of mine, although I wish I didn’t have to, “According to the World Health Organization, suicide is the second leading cause of death among 15-29-year-olds worldwide. Egypt “officially” ranks as number 143 in the world in suicide rates which calculates for 4 suicide cases in every 100,000 people. And these are just the official records.”

This article was four months ago, in yet another suicide case. Now, it is four months later, and still, there has been no official awareness campaigns made in schools or elsewhere to show the importance of taking care of your mental health. No official strict procedures have been taken against pullies or bullying, in general.

And most importantly and drastically, there is still no place for people to go ask for help or turn to when they feel suicidal or depressed. In other words, there is still NO DECENT OPERATING SUICIDE HOTLINE in Egypt, which is the most basic and essential need to face such a widely spreading issue.

In our last desperate attempt to cling onto any hope, we stumbled upon a number that is supposedly for a suicide hotline here in Egypt. However, we couldn’t really celebrate. The number only operates until 3 pm.

This is what we found: 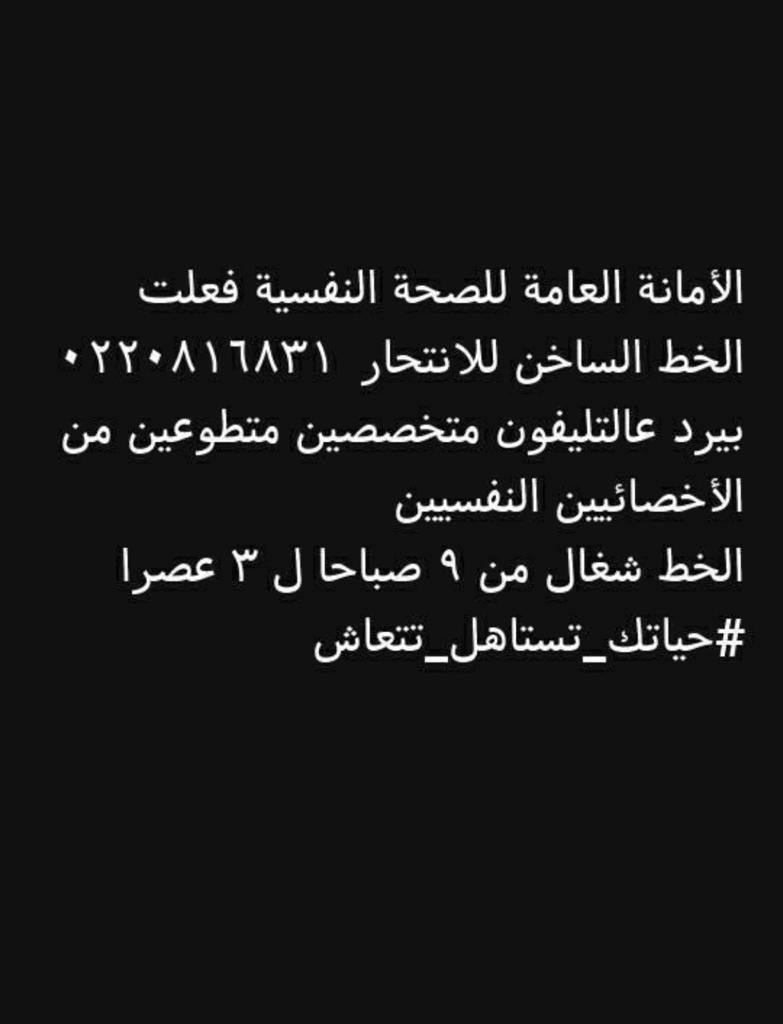 We called the number to check it out, this is what we discovered. It actually only works from 9 am to 3 am and in the near future, it will be working till 8 pm…

When I asked the man on the other end of the phone “what can I do if I get suicidal thoughts at a time other than the “working hours”?”, he said this and I quote; “I’d prefer it if it were during working hours, so I can be able to help.”

So you can only get suicidal thoughts within the official working hours, any other time, you are on your own.

Also when we asked about how it works, we discovered this; if you called because you are struggling with suicidal thoughts, they will get your information, hang up then have whatever nearby care provider contact you to “help you through it”.

Also, this number is not specified for suicide alone, because apparently, it is not significant enough. When I asked what other services does it offer, he said “Addiction problems, teenage crises, any ‘psychological problem’.”

We also discovered that it has only been operating as “suicide hotline” since last December so for only 2 months!

Honestly, personally, I don’t know if now is better than before or worse…

I can’t believe I even have to say this, but the very concept of a hotline is that it has to operate 24 hours a day, 7 days a week. Also, it can’t be a landline, since it shouldn’t go out of services at any time under any circumstances!

So the fact that this “hotline” is a landline and has a time limit is defying its very own purpose as a suicide hotline!

At the risk of sounding like a broken record myself, your mental illness is not a temporary mood. It is not a phase, nor is it a privilege to acknowledge it. It is not an extracurricular activity to take care of your mental health and wellness, it is a necessity!

So if you or anyone you know is or even might be struggling, speak up, NOW, and do something about it, before it is too late, because it can be!