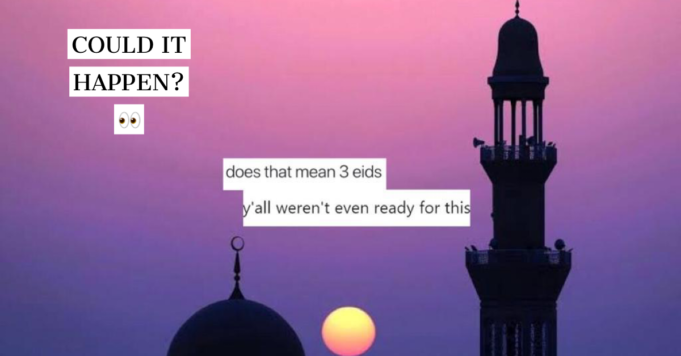 Brace yourselves because this news is about to shock you just like us! We actually might witness not one, but TWO different Ramadan seasons in exactly 10 years. Can you believe it?

Well, other than the fact that the first thing that popped into our heads hearing about his was: MORE MANGO KONAFA! Still, we can’t process that this could be true.

Rumor has it that in 2030 the Muslim community is going to celebrate one Ramadan season at the beginning of the year, and another one at the very end of it. How? You may ask.

This whole thing did start a week ago with a viral Tweet that pointed out the possibility. However, when we looked further into it, we found some tweets from 2013 by people who were already aware of the 2 Ramadans in 2030 phenomenon.

In 2030, the fasting season is allegedly going to start on January 6th and end on February 4th. And since, normally, the Ramadan after comes 10 days earlier; it will revisit us once again in the same year on December 26th, to end on January 24th, 2031.

As much as this is basically unprecedented shocking news, and despite the fact that we can hardly handle one take of 30 fasting days per year due to the fatigue that comes along with; let’s look at the bright side!

First: Both will come in the Winter season. Therefore; no complaints about the burning sun. (Global warming reacted Haha but still!) *fingers crossed*

On the other hand, if you – for some reason – feel that you’ve missed out on actually ‘becoming a good person‘; praying, fasting and reading Quran in the first Ramadan of the year 2030, you’ll have a chance in the VERY near future to make up for it and ease your guilt.

We don’t know about you guys, but we see this as a win-win situation! Tell us; if all of that turns out to be true, how would you feel about it?