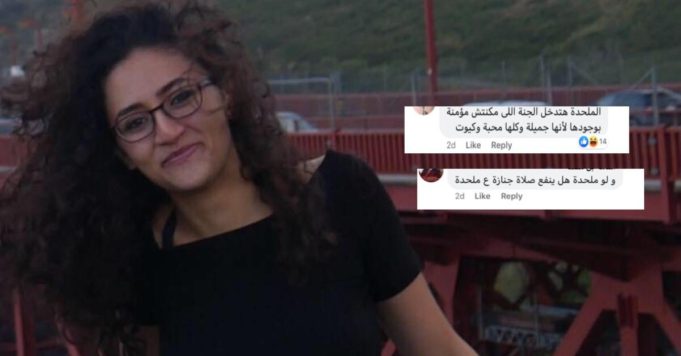 About a week ago, an Egyptian girl named Norhan Nassar passed away. The sudden death came as a shock to her friends and family given the girl’s young age.

But what really shock us and struck mass-controversy was something else. Hateful posts and comments came flooding all over social media and we had to say something about it. Here’s why….

Okay, so, apparently, people claim that Norhan Nassar identified herself as an “atheist” and that it was common knowledge among her friends and family.

And since Norhan was somewhat considered a public figure as she was part of “El Da7i7” team, people didn’t miss the chance to heavily condemn her mourners.

Basing their attacks on the fact that, an atheist, who willingly chose to disbelieve in the existence of God shouldn’t be mourned or prayed for since they are a “kafer” who will end up in hell. But is it really our call?

When someone dies, the first thought you should think about is the emotional welfare of the their family and friends. As for their judgment, it should be left to God.

Naturally, your first thought should be sending out thoughtful messages to the deceased’s family. Definitely not jumping to conclusions about their judgment day!

While those who knew her are celebrating her academic excellence and renowned career, some Egyptians are calling to stop the condolence messages and prayers as they think it’s inappropriate!

This definitely isn’t the message we want to send out to the world about our societies. We should be kinder and we should know better.

People with such mentality should seriously reconsider their actions and words. No one is entitled to call anyone a “kafer” let alone, someone who died.

Let’s be more considerate towards her family and loved ones. What harm will her friends’ prayers do?