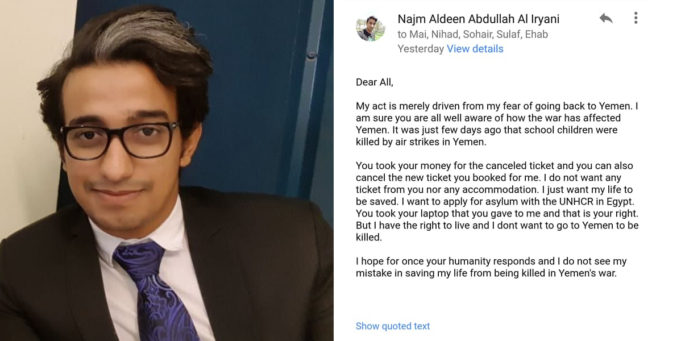 We were all shocked this morning to find a post by former AUC student Najm Al Iryani stating that he is being deported after the university expelled him without giving him a chance to avoid going back to Yemen, where he would literally live in a war-zone and possibly lose his life.

In a lengthy appeal to the university, and anyone who could help, Iryani wrote the following on his personal Facebook profile:

“Hi everyone, my name is Najm Al Iryani and I am a senior at AUC who came here on a scholarship from Yemen. Recently, I got into a case in the university which is resulting in the university expelling me from the scholarship and AUC, and they want to send me back to Yemen BY FORCE. During the war, my sisters, mother, and father all passed away. I have no one in Yemen and as you all know, the war in Yemen is happening in front of everyone‘s eyes and going back for me means having the same fate as my family. I appealed to AUC, I asked them I want to apply for asylum, I told them I will die if I go back, but they didn’t care. At first, I didn’t want to post this because I was worried about my case but now I have no other option. The university booked a ticket back to Yemen for me at the end of the month but because I didn’t want to go back, I canceled the ticket. The university found out and banned me from leaving campus to force me into going to the airport with police and security, to take the next flight to Yemen. They held my passport with them and never agreed to give it back. My ticket information is still vague to me and I don’t even know if I have a transit or not because they refused to give me the ticket. I am currently in the airport with my passport being held by the security, and I have no idea what I am going to face back in Yemen. I‘m posting here because it’s my last option and if anyone can help me reach UNHCR or seek asylum elsewhere, please help. Staying in Egypt would not have been illegal for me or AUC, but this is sadly what AUC stands for, and the values they always talk about and preach. The security personnel is waiting for me outside so that I don’t try to run away and they want to send me by force to my death.”

The post circulated around Facebook, and through AUC groups and pages. The AUC Student Rights Coalition were among those who shared the story urging anyone with contacts to UNHCR to contact Iryani.

While the details of the events themselves remained a mystery throughout the story; a Facebook user posted a detailed explanation of the events on his timeline.

Hello everyone, this is the incident that occurred against Najm ElIryani, the AUC Yemeni student, with the AUC security in details. This is a legitimate kidnapping case and we should not remain quiet about it AT ALL!!

On 2:15 PM, Friday 10th 2018, AUC security, consisting of 6 to 7 personnel stormed his dorm room looking through the drawers, cabinets, his medicine and went through certificates and read them. Then, they asked for the flight money that Najm refunded, and he gave it right away and also gave back the laptop that came with his scholarship. They told him that his flight was today and that AUC security will pick him up from his room at 1:30 AM and drive him to the airport. They told him that they will keep his passport and tickets with them until they pick him up.

After a while, at 3 PM, he went to Point 90 mall to eat then Brigadier told him that he’s not allowed to leave. He sent security to take him back to his room with a golf cart so that he wouldn’t go anywhere like a prisoner!!! Najm asked if he can meet the Brigadier and told him that he can’t go back because there’s war in Yemen and he is going to die. Brigadier responded with “ياعم مفيش حد بيموت و الناس عايشة و بالمرة تزور بلدك لو واحشاك” meaning that no one is dying in Yemen and who doesn’t miss their country!!!!! He asked them for a couple of days at least so he may at least go to another country since there are no flights from Yemen. “You’re sending me to die there!” Najm explained. They responded is that this is fate and God be with you “ده قضاء و قدر و ربنا يعينك”. He couldn’t even argue with them and went back with the golf cart to his room.

At 1:25 AM, security came then took him with the golf cart to the car.
At the airport, AUC security was allowed to go in with him. Later on, he reached the check in and AUC security told him they will wait with him until he boards the plane!!
He refused to check in and remained silent. He made the post and when the authorities intervened and the UNHCR stopped the boarding, he left.

He’s currently in a safe place and will meet with the UNHCR to see what will happen and what kind of asylum and where he can seek it.

Please note that AUC was not allowed to take such actions since he still had a valid visa and these actions totally contradict with what AUC say they stand for and we, as students, should not stand for what they did!!

There has been an emergency case concerning a student named Najm who was being forced to leave the country due to reasons that will be communicated formally to us by the administration very soon.

Upon negotiations with the Executive Director of the Security Office, Najm will not be deported and will be given some time to further discuss his case. The Student Union was assured by the Security Office that Najm will have a safe stay in Egypt until this issue is resolved. We will be handling this case very carefully and are currently trying to reach an agreement with the university to allow Najm to access campus until resolving the issue at hand.

Almost 9 hours later, however, they had a second update with the following statement:

1- The student had several accusations that concluded to his termination of enrolment at AUC. These accusations will remain confidential.

2- The student is currently safe after the Student Union President picked him up from the airport at the time of his deportation. We are in contact with UNHCR representatives to study the situation and provide the best scenario for the student’s asylum.

3- The student will remain in Egypt until the end of his Visa period.

The Student Union condemns and will not tolerate the administration for the following points:
1- Raiding in the student’s dorm room and forcefully demanding him to leave the country in such an offensive manner.

2- No one other than a government personnel has the authority or right to deport anyone on Egyptian soil.

The Student Union will continue to represent and protect all students’ rights in all circumstances.

It is worth noting that Iryani’s family were killed as targets of political conflicts and not as war casualties.

Please Note: This is an ongoing story, and the post will keep updating till the issue is fully resolved.