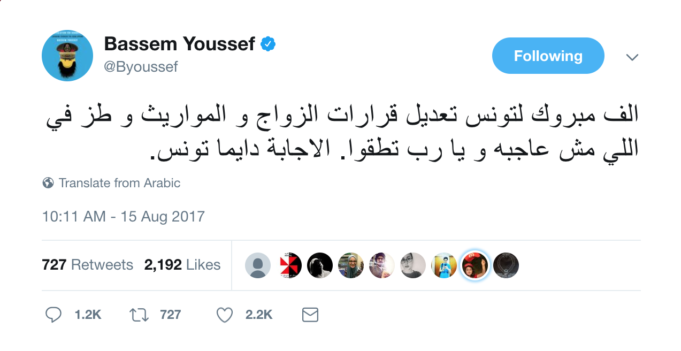 Earlier this week, Tunisian President Beji Qaid Al Sebsi has suggested a call for equality when he requested the abolition of the Circular 73 that bans Tunisian Muslim women from marrying non-Muslim men. Following Women’s Day on Sunday, the decision
has come timely to give more freedom and equality to Tunisian women. The Tunisian society has consistently worked on abolishing any barriers to women’s equality. The Circular is yet to be reviewed by the Justice Minister.

Yesterday, Bassem Youssef has tweeted in favor of the decree in process. And here are some of the responses he got:

Others were supportive of his opinion as well:

As controversial as this topic can get, it got even more heat when Bassem Youssef tweeted his opinion about it! People need to realize that they are still free to do whatever they want with regards to this matter. They don’t have to marry someone from a different religious background if they don’t want to, and they can if they want to. It’s always a matter of choice.