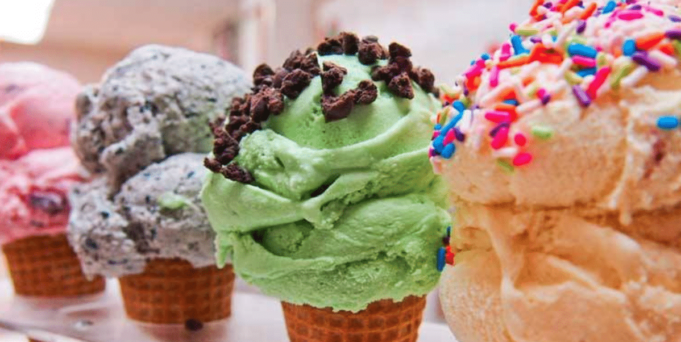 If there’s one thing everyone would agree on, it’s definitely ice-cream. Do you prefer it soft or in a scoop? Dark or light? You might even want the old fashioned Sundae. No matter what your frozen preference is, you can find it in one of Cairo’s great ice-cream places, especially the new ones!

This ice-cream shop has become like home for us in such a short time. Named after the founder, Dara’s ice-cream is so cozy and personal and makes the best honeycomb flavor ever! They have branches in Sheikh Zayed, Fifth Settlement and Zamalek.

This new place makes old-school gelato to die for. Located in 6 October and Sheikh Zayed, Salloura is a Syrian place specialized in classic flavors and Bozza. Though lately, they added cheesecake and Oreo flavors that are just heavenly!

Bel Gelato is one of Heliopolis’s landmarks for a reason. They make exceptional flavors that you don’t think would make sense at first, but once you taste them, they’re addictive. Lime and Raspberry mixes are our favorites!

Their motto is “Made the real way, no shortcuts!” with all natural ingredients and little artistic touches, this place is exceptional. You can find them now at El Guezira Plaza in Sheikh Zayed.

Despite being a bit pricey, the most creamy ice-cream in town with a Tiramisu flavor is just worth it. Located in Maadi, Stravolta has earned its place in our hearts for quite some time now. Chocolate flavors often run low, so get there quickly!

Another old-school ice-cream we just love is Etoile. Yes, they make great ice-cream, too! We often find ourselves feeling nostalgic for their classic flavors that never go wrong!

So, what’s your frozen preference?