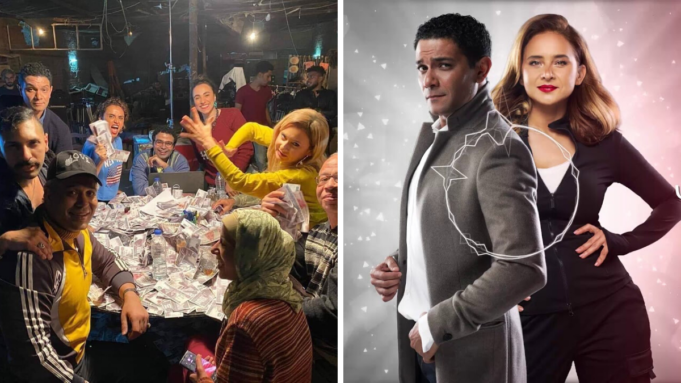 With this Ramadan falling under an extended home-stay, we kinda had nothing going but TV. And by TV, we’re kind of only talking about Bi 100 Wesh — this year’s undeniable hit. As the show went on, we followed, watching as our favorite con-artists did what they do best.

Here’s where this gets a little sad, though. We’ve just seen the very last Bi 100 Wesh episode…so far. And, yes, we’re going to tell you all about it.

The 30th and final episode of Bi 100 Wesh’s season one started with our band of merry criminals getting ready for their next big con, presumably their last before leaving the country for Europe.

And, if you’ve been following the show, you’ll know just how high the stakes are. The conned is Bassem Amir, Omar’s old rival and a literal billionaire, the money is more than they’d ever planned for, and the two cops trying to catch the gang are getting closer than ever.

However, the gang persists and erases every trace of the cons (and any links to the captured Naglaa) from their phones, all while tying up their affairs, and going into the Bassem Amir con with nerves of steel. Once at the soon-to-be conned’s office, the police finally get a full-fledged confession from Naglaa…which wasn’t incredibly hard to do.

As time runs out, the gang gets away with the money from Bassem Amir and go to the shady Osama Atwa’s place to finalize their cash transfer to Omar’s Swiss bank account before they scram to the airport.

Once at the airport, everything goes to hell. The gang discovers Fathi isn’t around and won’t be coming, as they put two and two together, but manage to fly to Switzerland. Sameh isn’t as lucky because his plane doesn’t take off before the cops catch him, making him join Naglaa’s fate of imprisonment.

So, yeah…a lot went down and we can’t help but feel sucker-punched. Be honest, did you see Fathi conning the gang coming? No, obviously, because we’ve all been 90% certain Omar was going to be the one taking off with the money.

Honestly, if anything, we’re still trying to get over the feelings of shock and pure adrenaline rush we’d gotten throughout the episode. At first, all this anticipation seems to lead to a total “what just happened” feeling but we’re honestly not disappointed. We’re rather excited. See, this isn’t the last of Bi 100 Wesh.

Naturally, the fans of the show (notorious for their honestly interesting theories) are currently biding their time until their season 2 theories start popping out. Here are a few we thought of, so far.

Go back to the beginning of the show, when we first meet Omar and get his backstory. Doesn’t he say his dad ran off to Europe with the family money? Well, where do people with insane amounts of shady money go? That’s right. Switzerland. You know the chance is there, come on.

This one’s a little more realistic. And we should embrace reality here. You know as much as anyone that Captain Fathi isn’t exactly the brains of the operation. And once in Europe (or wherever he is), Fathi might run into shady troubles that will cost him his money, so he’ll try to find his old gang…that is, of course, if they don’t try to find him first.

Okay, so this one is completely wish-fulfillment but, honestly, how good would this be? Picture this. After the investigation, Naglaa is let go but because of the public backlash, she’s given a new ID under a witness protection program (yes, it doesn’t exist here — just roll with it), Hayaa. And this Hayaa goes on to be the very same woman from Segn El-Nesa…as in Naglaa goes back to square one.

Another one that’s a little far-fetched. You know how this gang’s been called La Casa de Boulaq for a while now? Well, what if they happen to meet the real La Casa de Papel gang now that they’re all in Europe? It might happen and if it does, you sure know they’ll be fighting over who gets to be Cairo.

We honestly can’t wait to see what Kamla Abou Zekry and crew come up with next!