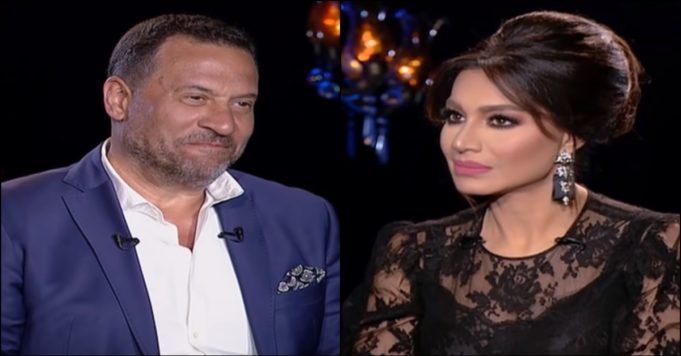 Maged El Masry recently appeared as a guest on Talk Show “Sheikh El Hara” with hostess Basma Wahba. And as most of you know, the nature of this particular talk show is quite different.

As it tends to focus more on the personal rather than the professional side of its guests. So naturally, a few truth bombs usually get thrown around revealing some facts we truly wish we can un-know.

And it is safe to say that Maged El Masry’s recent episode was the perfect example to said traumatizing truth-revealing.

Most of us liked Maged El Masry for his acting abilities, musical side, and his -seemingly- easy going carefree personality. But seeing him under Sheikh El Hara’s light showed us a completely different side of him.

From proud sexism to blunt racism, it was hard to watch a single part of the episode without -casually- being hit in the face with a derogatory or an offensive remark.

Somehow, Maged El Masry managed in just the first few seconds of the episode to “proudly” display his sexist side.

It was when Basma Wahba asked him how come he used to work in a nightclub yet is refusing to let his daughter take the Hijab off, addressing how contradicting that is.

Maged then started to “defend himself” by saying the following: “I only worked\performed in a nightclub, didn’t drink liquor or live the nightclub life”, thus casually offending everyone that does either.

Then when “trying” to defend his decision regarding his daughter’s veil, he said it is his house and he is free to do whatever he pleases in it. Then when Basma asked him whether he believes in freedom or not, he -hesitantly- said “Yes, but within limits.”

Sadly, that wasn’t the worst part…

Free to be sexist?

To make sure the episode ends on an even lower note, Maged El Masry’s answer to Basma’s last question was -somehow- even more sexist and offensive than his first one.

Around the end of the show, host Basma Wahba asked the star -who’s been a part of the entertainment industry for several decades now- what would he do if his daughter told him she wanted to act.

His answer was “She wouldn’t even dare to say that to begin with.” When asked why, his answer was; “because she knows it’s forbidden”.

When Ms. Wahba asked him the oh so logical question “Why is it okay for you but forbidden for her?”, his answer was “I am free to do whatever I want. She’s my daughter and I don’t want her to act, it is MY business.”

When Basma, yet again, asked the logical follow-up question for his statement “Do you think the entertainment industry is bad?”, he said “No one said that.” Then topped it off with, you guessed it, “I am free to do whatever I please in my household”.

In his defense, “She is really talented”. Wait what?!!

To top it off, proud father Maged El Masry stated that his daughter “Mahitab” is actually extremely talented and a top notch comedian.

Yes, the same daughter he is banning from practicing said talent because he is “free”.

For some reason -we are not sure what-, Mr. Maged thought it is a point in his favor to brag about how many roles and opportunities he denied his “very talented” daughter because “to him”, that’s the right thing to do.

Because he said and we quote, he wants to get her married off and settled down so she can be “zay el fol”.

Because we all know the end goal for every girl’s life is to get married and be “zay el fol”, right?

When Basma stated the obvious and accused him of displaying double standards, he, so PROUDLY admitted, “Yes, I have double standards”. But wait, he topped it off by calling it a positive thing.

So apparently double standards are a matter of perspective now, ha?

The cherry on top of this lovely cake was when he bragged about encouraging both his sons to be a part of the entertainment industry.

One as a director, and the other as, guess what, an actor who acted alongside, guess again, his very supportive parent Maged El Masry.

When irritated host Basma Wahba naturally, asked him “Why your sons but not your daughter, isn’t that discrimination?”

Yes, that was his entire justification.

Lastly, Wahba cornered him by asking if he would be okay with his daughter working as doctor not an actress, he said “Yes”. When she astonishingly asked him why, he stuck to the national anthem of the episode and AGAIN said “I am free, it is my business.”

When Wahba finally said the four words we were all thinking “She is free too!”, his answer was -brace yourselves-, “No, she is not.”

Something tells us the superstar is not aware of the irony in his overuse of the word “free”, despite how ridiculous it is.

Casual Racism at its finest

If you feel emotionally abused at this point of the article, we understand. But please brace yourself for what is about to come is much, much worse.

As most of you know, there is a segment in the show where the hypothetical character “Sheikh El Hara” asks the guests embarrassing or personal questions about some hidden or secretive stuff.

And in one of the questions Sheikh El Hara asked Maged El Masry about a “prank” a friend of his did on him in the past at 2 AM in Roxy that included “African girls”.

When asked about it, Maged got immediately flustered and tried to get out of answering the question on the ground that it is too “personal”.

But when both Basma and Sheikh El Hara cornered him, he eventually had to answer. And boy do we wish he hadn’t.

So after being horrified to our core listening to the story here’s the jest of what happened:

Yes, that happened. And that story was told by a national public figure on national TV in an African Arab country where a lot of Africans and people with dark skin live and watch said public figure on said TV.

Worse, it was told as a joke to which he, the host, and the imaginary character Sheikh El Hara all laughed their hearts out over how hilarious that story is.

So in a matter of a single hour, the popular TV star Maged El Masry managed to display an amount of both sexism and racism that will most likely alienate more than half of his audience.

Not only did he brag about being an oppressing parent and a dictator father, he also obliviously demonstrated an astounding level of undeniable hypocrisy and double standards.

Then to top it off, he made a joke out of an entire race and laughed his deep-rooted racism off as if it is so funny, and it was honestly the straw that the broke the camel’s back.

It is hard to believe we have to say this; but personal choices aside, when you are a public figure with a very public image, and you know… an adult, being held accountable to every word you say is pretty basic.

So he either didn’t know nor acknowledge that by saying what he said that he is degrading and insulting all womankind and the entire African race, which is pretty irresponsible. Or he knew and just didn’t care, which is worse.

But one must give him some overachieving points for managing to completely insult an entire gender and an entire race in less than an hour and with such a casual and care-free manner.

Not a lot of people can do that. Thankfully.