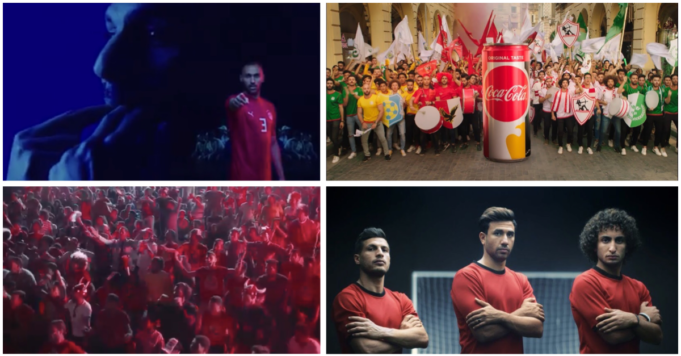 They say Egyptians are crazy about football. And well, we don’t see the lie! From the usual patriotic songs to the new motivational ads; there are a thousand tunes to cheer for our National Team.

And because we know you’re going to need those on your way to the stadium, or even to the coffee shop where you’re watching Egypt’s AFCON 2019 games, we made you a full playlist!

Starting with the national anthem for literally every Egyptian legend from Abdelhalim Hafez to Adel Emam and Hassan Shehata, Mohamed Hamaki mentioned too many legends in the love of Egypt. And the song is quite suitable for the occasion, of course!

The song that gave all of us hope in the last AFCON 2017, we were too close to finally win it after 7 years. And this Mahmoud El-Esseily and Zap Tharwat Pepsi song was released just in time to reaffirm our confidence in the National Team, in the best way possible!

This Coca-Cola Egypt campaign was just recently released, and to say we’re in awe is an understatement. It’s not just about how the tune itself is so upbeat and motivational, it’s about how they literally made all Egyptian football rivals come together for once, and declare it with love for Egypt!

#4 The Pepsi and Chipsy Feud Tunes

Those ones are quite the catch, and you can’t go and watch the match without learning the lyrics to both feud tunes. Where the first Chipsy Egypt one is basically the fans giving warnings and instructions to the players; and in their turn, the players fire back through the Pepsi ad!

A little nostalgia is a must when it comes to such occasions! The first time Amr Diab sang the Africa song was in 1991 during the opening of the African Games in Egypt. And now, it’s giving everyone the feels all over again with the new Vodafone ad!

When this Loai song was released in Youssef El-Sherif’s “El-Alamy” movie, it soon became an official song for the National Team. And it surely makes sense, since that’s what the movie was all about and the song itself is too emotional and never gets old!

Can a cheering for Egypt playlist ever be complete without the classic Hamada Helal “Wala w Aamalouha El-Regala”? Absolutely not! It’s the essential of all essentials, literally! But this one specifically comes in handy immediately after winning games!

This recently released one from Orange starring Mahmoud Trezeguet, Amr Warda and Tarek Hamed is a mixture of outstanding and absolutely funny! And we can’t not mention how the song had basically become the background soundtrack of our lives these days. It’s quite catchy!

This one is also considered part of the classics. And should literally be played after every goal from any of our National Team players until we win the whole tournament!

We couldn’t miss the finally solved mystery of El-Habadabadim! And since it has become the official spell for the National Team to win this AFCON, we’re going to repeat it until it’s over. (As if it isn’t already stuck in our heads since its release!)

Keep this list saved so you’re ready for the upcoming AFCON matches like never before! And tell us, what do you think about our playlist for the tournament?