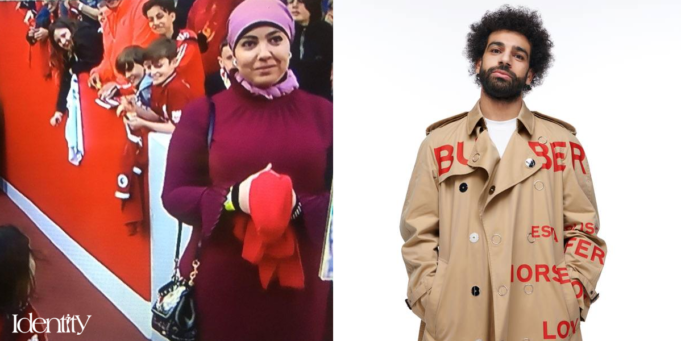 Mohamed Salah is no stranger to the public’s eye. As of recently, he’s been turning heads due to his new photoshoot in GQ, the men’s fashion magazine.

The fashion shoot made Salah a thriving male fashion icon.

While it’s refreshing to witness an Egyptian become an international household name, the shoot still stirred many pots and rubbed many people the wrong way.

Salah got criticized in many ways, which we think is pretty normal for a public figure. Someone else though received a lot of criticism while not even signing up for any of this.

This person is Salah’s wife; Maggie.

Maggie has always been the subject of criticism for her humble image, but it did not sound like a big deal since Salah has been pulling a humble look as well. But with the new photoshoots, some people are starting to question the fact that he’s investing a lot of effort in only his image, but not hers.

One of the people who viciously attacked the Liverpool star and his wife was Dena Anwar, the anti-hijab activist.

After the GQ pictures spread all over social media, Dena Anwar wrote a Facebook post criticizing Mohamed Salah and his wife.

Dena stated, “A live representation of the common absurd scene of the majority of husbands and wives in the Middle East.”

She proceeded “A husband always in his “Sahel” mode, and a wife always in her “Umrah” mode. What brought Marina next to Mekka, Mekka’s father?”

This comment, of course, was met with quite a lot of counter-attacks from Salah’s loyal fans.

A simple and blunt “none of your business”.

A friendly yet, straight-to-the-point argument was that it’s their personal life and if the wife is okay with it, then it’s her business.

A very strong snap-back called the activist out for HER ‘own double standards’.

I think we can all agree that this has crossed many lines. Yet the question remains, what was Dena’s point?

Just because Maggie’s husband chose a certain type of life in the spotlight, does that give people the right to expect the same of her? Isn’t that outright sexism?

Facts are facts. The fact here is, Maggie is linked to one of the most important people in the public eye. She does, in fact, represent the modern Egyptian woman – whether she likes it or not.

At the same time, Maggie is just a regular Egyptian woman who happens to be married to a man who became a celebrity after their marriage. Her being criticized for what she wears is, again, not something she signed up for.

We are in no way, shape or form giving a valid excuse for any of the bullying, or even direct criticism Maggie is receiving.

However, if the attack Maggie is receiving is all due to the fact that she is married to a public figure then people should try to understand it’s not her fault and what they do is only hurting her.

No one wants her to change who she is. She could even help put Egyptian women in general in a better light, but continuous social media bullying is not helping that!

Isn’t it time people realize it’s their personal life and no one has the right to intervene with it?