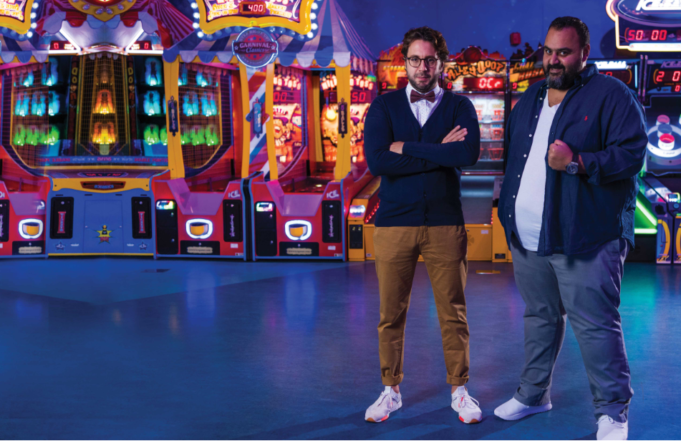 In 2008, a movie was released with fresh faces and a sense of humour we never thought we’d see in Egyptian comedy movies. ‘Wara’et Shafra’ was born, as well as a new wave of humour. The movie became a cult favourite, and the stars behind it became comedy legends. Ten years later, we had the chance to speak with the men behind the movie – Hesham Maged and Hesham Mohamed A.K.A Chico, to discuss their past, present and future in comedy.

We first met Chico in El Gouna Film Festival, where we approached him for this interview. He gladly gave us his number, and a few WhatsApp messages later, we were at Hesham Maged’s home conducting our interview.

Hesham, who is a lovely host, welcomed us to his home, and a few minutes after, Chico arrived. Everything went smoothly; it did not even feel like an interview, but rather a quiet gathering with friends.

Chico had previously told me that both he and Hesham were engineers before they started acting. This was before the interview, which made me curious to know, how did they become who they are now? Was it a goal or an accident? And this was the first thing I asked them. “It was pure coincidence,” they both said. 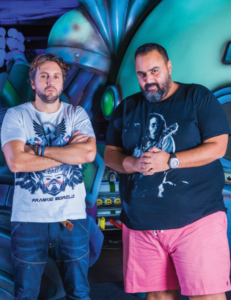 “The three of us were together in university, and we loved doing pranks and practical jokes. Each joke could take up to a month; we’d pretend we’re drug dealers to our colleagues, for example, and they used to believe it,” said Chico.”It was very inhuman. One of our colleagues in particular was the butt of all our jokes, and I’m sure he hates seeing us being famous now,” Hesham added. “He would lose it if he reads this interview.”

Chico then continued telling us about how they became who they are now. “We decided to take it to the next level, and started documenting what we do by producing movies. We generally loved parody movies, so this was our go-to genre. We started making parody movies about classical movies. During our first movie, we had very little equipment and little knowledge of what we were doing. Whoever felt like they were special at something, they did it. It was very basic, that even the soundtracks in the movies were played by regular cassettes while shooting.”

“We used to shoot these movies during summer and show them when we started university. We would then go to any café or restaurant with a projector and let them show the movies there. We would guarantee them attendance if they showed our movie. Our first movie was actually screened in Chili’s during one of our friends’ birthdays. We made three movies like that, up until our fourth movie.”

Their fourth movie was the infamous ‘Regal La Ta’araf Al Mostahel’, a parody movie that went viral in 2001 through VHS and CDs. Again, this was 2001 meaning YouTube wasn’t even created back then. This genre of movies was new to Egypt, which caused quite the trouble for the guys.

“This was a home movie, we never expected it to go viral. It was also a parody movie, which meant we made fun of specific people and used certain language that, back then, was not typical to use in a movie,” said Chico about the movie. 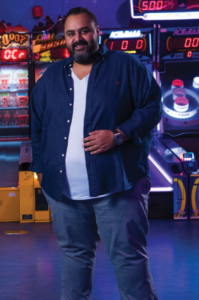 Hesham then told us that the movie reached the authorities, and they wanted to interrogate them to know their intentions behind creating the movie.

“As soon as people knew we were wanted because of this movie, more people were curious to see it and it became an even bigger deal. We were young, and scared. We started to remove our phone batteries and look behind our backs for undercover cops – we did those cliche things people do. We were asked to stop releasing any movies, which we obliged by. A few years later, we just couldn’t quit acting and ended up making a fifth movie.”

“We then met Mohamed Hefzey, the producer, who was just starting to make it in the industry. He asked us to write and present a new show he was producing.” Since their graduation, and ‘Wara’et Shafra’, the guys had already kicked off their careers in engineering. “I refused the deal at first,” Hesham told us. “But Chico and Ahmed Fahmy kept insisting that we go for it. I was still hesitant, that they even did the first two episodes without me, and then I joined them.”

During that time, the movie ‘Awqat Faragh’ made its debut, and all the directors and producers wanted to jump on the “fresh faces” wagon. Maged, Chico, and Fahmy were the perfect subjects, and Hefzy asked them to work on a movie, after the airing of their show. They were asked to write and star in ‘Wara’et Shafra’, and they agreed.

This was the turning point in their career; they were going from homemade videos to the big screen. Instead of adapting to the mainstream comedy, they stood their ground and let comedy adapt to them. 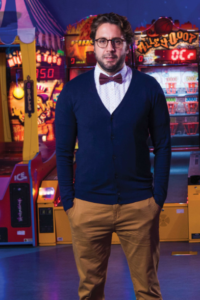 When asked if they expected the huge success of the movie, they said they didn’t have any expectations. Hesham said, “We went into this with nothing to lose, and nothing to gain as well. We tackled it like any other movie we did and hoped for the best, but we had no expectations. All we knew was, we can’t be like everyone else. We needed to offer something new in order to stand out.”

It is now official; the engineers became actors. Then what? Chico resigned after the release of the movie, while Hesham did not resign until the release of ‘Samir w Shahir w Bahir’.

Chico spoke to us about his career prior to acting, “Everyone in my family is an engineer, and so was I. My father had an engineering company, and I started working with him so I can have more flexibility with my working hours, even though I refused to work with him at first.”

When we asked them if they ever regretted quitting their previous careers, they both said at the same time “Not once.” They both love being actors, yet Chico still expressed his love and passion for engineering. Hesham, on the other hand, flat out said he hated it, even though he was the last to leave the field. 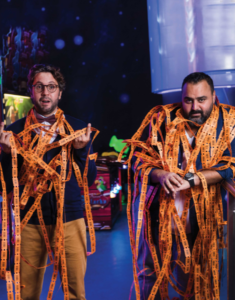 Hesham laughed about this and said “The industry was exactly what we expected, especially the corrupt part of it. We knew from the start that it is not all glitz and glam. It was even better than we expected, but that’s probably due to the fact that our career took a shortcut and we didn’t have to struggle to be where we are now.”

Comedians are usually overlooked when it comes to acting skills, especially if they perfect the funny personas at all times. The public just struggles to take them seriously, and we wondered what they thought of that, and if they will ever consider taking more serious roles.

Hesham commented on that saying, “We are starting to consider this now, but this is something that has to happen gradually. In ‘Hamlet Freezer’, for example, we had a bit of action. In ‘Alb Omo’, there was a bit of drama. We can’t take this step suddenly, because our fans watch our movies expecting to have a laugh. We can’t give them something else right now.”

Based on his answer, we decided to rephrase our question and see if they would still go for it if the fans’ reactions were not a concern, and their answers varied. Hesham said he would, and assured that he is still considering other roles, Chico, on the other hand, wants to stick to comedy.

With both of them having different visions for their future in acting, one has to ask, will they eventually stop working together? Hesham explained, “We don’t have any plans for not working together, but it’s bound to happen eventually. People might be bored of us acting together, or we may find that there’s nothing more we could both provide together.” 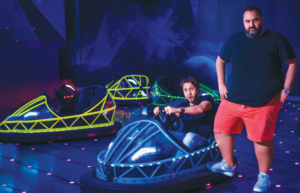 Chico then said the most friendship goals statement, “Why work with someone else when I can be working with Hesham?” Hesham agreed, and added, “Even if we have our individual movies, you’ll still find us making a guest appearance in each other’s movies.We will eventually grow old and be 50 or 60 years old, and it will be very odd to still act together. Even throughout history, there were groups and duos performing together, and they eventually split – from Tholathy Adwa’a El Masrah to the Beatles.”

Chico then explained that their dynamics is what makes them stand out now, “Hesham and I have completely different acting styles, which makes what we do interesting because we balance each other out. That said; I personally feel like the audience is somewhat over the one-man show acting technique. It’s very difficult now to create balance in a movie all by yourself.”

We now know the future of the duo, but we wanted to also know about the future of comedy in general. Where do they see it going? Hesham said that Egyptians are funny by nature and that comedy will always remain the main genre of cinema in Egypt. Chico agreed, “Everyone can now make jokes or memes that go viral on the internet. Memes and comics are everywhere, even I’m a meme. Back in the day, indie creators struggled, we struggled. Now anyone can have a YouTube channel and produce a movie and publish it easily. You can start from one Facebook post, and this is a challenge for comedians.”

Hesham made an interesting remark and stated that what happens on the internet now is how they started but before the internet was even a thing. “It’s like a full circle now. The world is going back to the point where we started from, which is very interesting.”

They both agreed that the world is going digital, and TV is slowly dying. “There’s a whole generation that never watches TV. Eventually, the entertainment industry will have to evolve to suit their needs when they become the primary audience,” Chico added.

We started this interview as fans of their work and left as fans of them personally. They are just two down-to-earth men who want to entertain. Looking at where comedy is going now, it really does prove that these guys are pioneers in what they do, and they should be looked at with magnifying glasses.